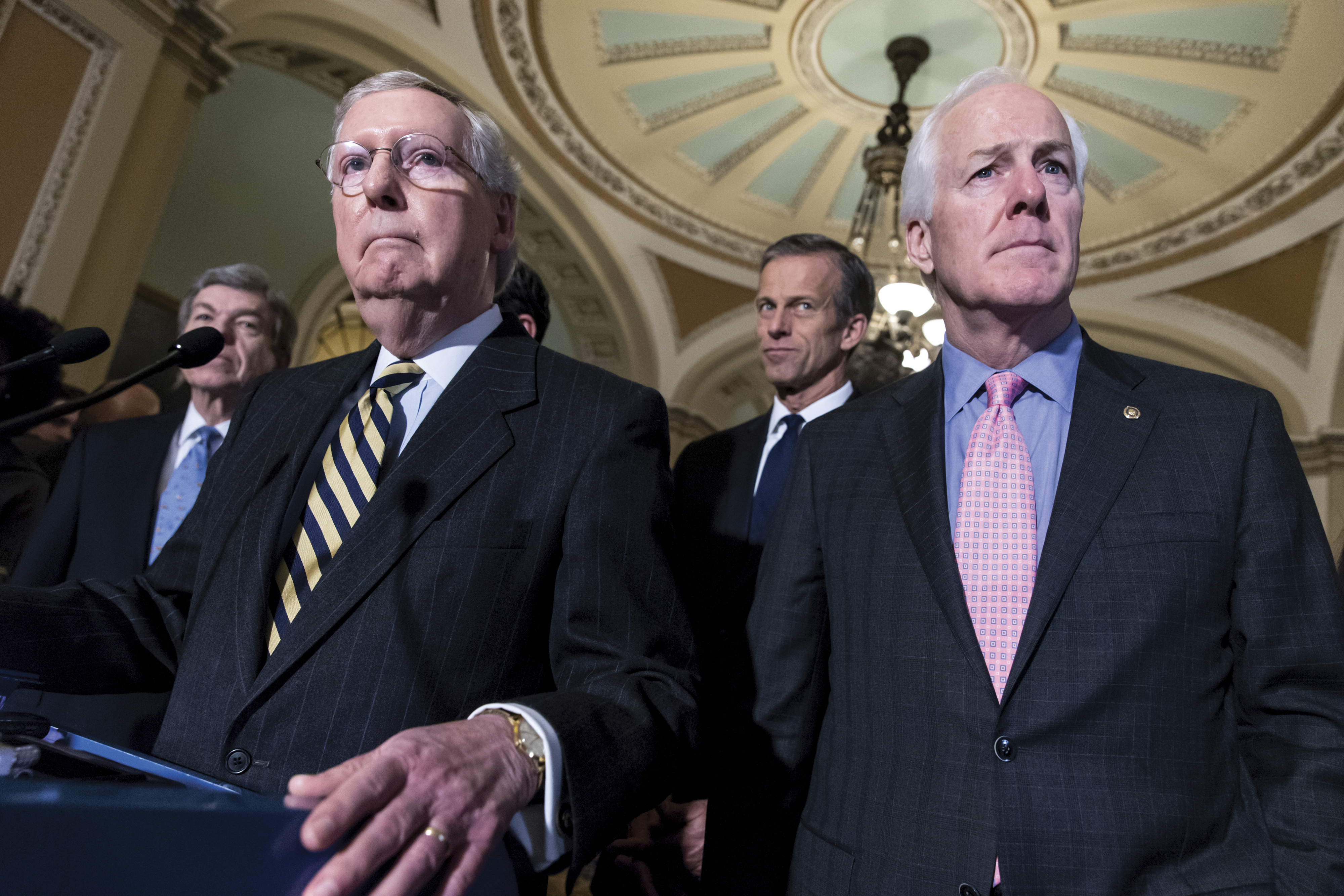 Senate Minority Leader Mitch McConnell, left, has praised the bipartisan gun safety legislation that Sen. John Cornyn and three other senators formed as one that “would make our country safer without making it less free.” | J. Scott Applewhite/AP Photo

In a 65-33 vote, 15 Republicans joined all Senate Democrats in passing the legislation. The bill now heads to the House, where it’s expected to pass as soon as Friday.

“Many have come to doubt whether we’re capable of making our institutions work, including the world’s greatest deliberative body, “ Cornyn said. “And we proved that we can when sufficiently inspired … to come together and find common ground that will help keep our communities safer, protect our children and save lives.”

The gun safety package came to fruition after weeks of talks between Murphy, Cornyn, Sinema, and Tillis. While the final package defied political odds, the bipartisan talks had early endorsements from Majority Leader Chuck Schumer and Minority Leader Mitch McConnell. And the path to passage looked increasingly likely after 10 Republicans backed the quartet’s initial framework.

Schumer and Murphy made the decision early on not to hold a political vote on guns, despite initial pressure from progressives to do so, and instead opted for trying to reach a deal with the GOP.

“I had talked to a few Republicans and there seemed to be a different mood, they understood how serious this was and how getting something done was important,” Schumer said in an interview. “This is the first time in 28 years that the tight grip that the [National Rifle Association] has had over Congress has been broken.”

While the NRA opposed the bill, McConnell and Cornyn both spoke to the group about the legislation — discussions that McConnell called “fruitful.” Though the two top Republicans’ yes votes Thursday could cause them some problems with conservative voters, McConnell said he sees the effort as both good policy and good politics for a party that’s lost ground with some swing constituencies.

“We’ve lost ground in suburban areas. We pretty much own rural and small-town America. And I think this is a sensible solution to the problem before us, which is school safety and mental health,” McConnell said on Thursday night. “I hope it will be viewed favorably by voters in the suburbs that we need to regain in order to hopefully be in the majority next year.”

It could be another generation before Congress acts again on gun safety. And while the legislation is more modest than Democrats’ longtime push for expanded background checks or banning assault weapons, it includes some of both parties’ gun safety priorities.

The measure provides grants for states to implement so-called red flag laws, which allow for the temporary confiscation of firearms from individuals who are deemed threats to themselves or others, as well as other crisis intervention programs.

In addition, it closes what’s known as the “boyfriend loophole” by barring individuals with misdemeanor convictions of domestic violence against dating partners or former dating partners from purchasing a firearm for at least five years. Under that provision, the right to a firearm would be reinstated after that period if the individual is a first-time offender and has not committed any violent acts during that time frame.

The bill also requires the FBI’s National Instant Criminal Background Check System to contact state authorities, local law enforcement and a state’s juvenile justice information system to see if an individual under the age of 21 has a “disqualifying” juvenile record for purchasing a firearm, including mental health problems. That provision would sunset after 10 years.

Plus, the legislation would make purchasing a firearm on behalf of an individual who is prohibited from doing so a federal crime and would clarify registration requirements for commercial firearms dealers who exist “predominantly” for profit.

Finally, the bill includes new spending for school security and mental health treatment. The mental health component of the package, led by Sens. Debbie Stabenow (D-Mich.) and Roy Blunt (R-Mo.), provides new funding for states to invest in community behavioral health clinics, as well as school mental health programs. That portion is estimated to cost roughly $8.5 billion, more than half of the package’s proposed price tag.

Prior to the final vote, senators were trying to negotiate with conservative detractors — who wanted a chance to speak against the legislation on the floor and called for additional amendments. But the amendment effort appeared to run aground over competing demands.

Underscoring the political volatility of the issue, the Supreme Court ruled Thursday to strike down a New York State law that limited the ability to obtain concealed-carry permits.