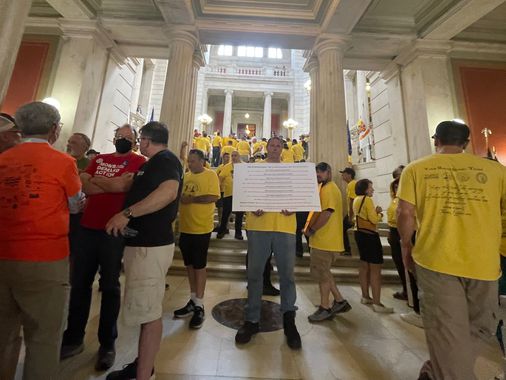 Big Bear Hunting and Fishing store and four Rhode Islanders — Jonathan Hirons of Warwick, chairman of Rhode Island Friends of NRA; Mary Brimer, a town council member in North Kingstown; Jeffrey Goyette of Florida, who has a home in Portsmouth; and James Robert Grundy of North Kingstown — are arguing that the ban violates their constitutional rights.

“All of the Citizen Plaintiffs are now forced to dispose of their privately owned, and legally acquired Standard Capacity Magazines by December 18, 2022, without receiving any compensation, or rights with or without conditions of continued ownership to keep their lawfully acquired property,” the lawsuit reads. “Should the Citizen Plaintiffs not comply with this requirement, each can now be convicted of a felony, and potentially face five (5) years of incarceration. Further, certain firearms, due to the expiration of their production, and for other reasons, cannot be modified for use with a smaller capacity magazine.”

“Banning magazines over 10 rounds is no more likely to reduce criminal abuse of guns than banning high horsepower engines is likely to reduce criminal abuse of automobiles,” wrote Providence lawyer Michael A. Kelly. “To the contrary, the only thing the ban ensures is that a criminal unlawfully carrying a firearm with a magazine over 10 rounds will have a (potentially devastating) advantage over his law-abiding victim.”

The lawsuit seeks an injunction and for the court to void and repeal the law. The case was assigned Friday to Chief Judge John J. McConnell Jr. and Magistrate Judge Patricia A. Sullivan.

The new law makes it a felony to possess any semi-automatic firearm magazine capable of holding more than 10 rounds of ammunition. A conviction is punishable by up to five years in prison or a fine of up to $5,000. There are limited exceptions for firearms dealers, law enforcement and military.

Legislators had rejected amendments to either “grandfather” in magazines already in possession or set up compensation for people to relinquish them. Attorney General Peter F. Neronha had warned that a grandfather clause would make the law impossible to enforce.

Now, those who currently possess high-capacity magazines have six months to come into compliance by permanently modifying the device, surrendering it to the police, or transferring or selling it to a federally licensed dealer or someone who is lawfully permitted to own or possess it.

Governor Daniel McKee signed the law on Tuesday. On Wednesday, Andres Mendes of Big Bear Hunting and Fishing signed an affidavit that the new law leaves him with an extensive inventory of firearms and magazines that are now illegal to sell to the public. Now, he has to sell, transfer, modify, or otherwise dispose of the magazines and firearms, which will have a “severely negative impact” on his business. He would have to set up an online retail wing of his business to move the firearms and magazines; Connecticut and Massachusetts have similar bans.

The four firearms owners bought the magazines for self-defense and don’t want to give them up. Through the Providence law firm of Kelly, Souza, and Parmenter, they argue that the new law is a slippery slope that goes beyond firearms.

“If left standing unchallenged, it would open the door to government’s ability to acquire private property, and obviate a takings clause issue by legislating under the guise of “public safety” in times of public fear, media outrage, and great political discourse,” the lawsuit says.