With an assist from Ally Mutnick

HOUSE TO VOTE ON GUN COMPROMISE— The Senate yesterday cleared the most significant legislative response to mass shootings in nearly 30 years and the House is already at work this morning, expecting to swiftly pass the bill and send it to President Joe Biden’s desk.

That’s right, the House Rules Committee gavelled in at 7 a.m. to take up the Senate’s bipartisan gun safety measure. Speaker Nancy Pelosi (D-Calif.) said last night that after the Rules Committee wraps up, the bill “will head immediately to the floor.”

House Republican leaders are whipping against the bill. There are enough votes to pass it, but as Jordain wrote yesterday, don’t expect anywhere near the same ratio of support that we saw in the Senate.

ABOUT LAST NIGHT— Almost a month after a gunman killed 19 children and two teachers in Uvalde, Texas, the Senate passed their bipartisan compromise on firearm safety and mental health services in a 65-33 vote, with 15 Republicans joining all 50 Democrats in favor.

Senate Minority Leader Mitch McConnell (R-Ky.) backed the bill after blessing the negotiations (and talking to the NRA while they were underway). The measure attracted less than a third of his caucus, but he saw the package as good politics:

“We’ve lost ground in suburban areas. We pretty much own rural and small-town America. And I think this is a sensible solution to the problem before us, which is school safety and mental health,” McConnell said on Thursday night. “I hope it will be viewed favorably by voters in the suburbs that we need to regain in order to hopefully be in the majority next year.”

Senate Majority Leader Chuck Schumer (D-N.Y.) declared that the “tight grip that the NRA has had over Congress has been broken.”

TENACIOUS DUO — It means something that after 30 years, it took two forty-something Senators with disparate approaches to get this deal on guns across the finish line. Sen. Chris Murphy (D-Conn.) sometimes struggles with optimism and Sen. Kyrsten Sinema (D-Ariz.) had some to spare.

“I’ve tried every tactic in the book to get this body to act and I’ve never been successful. And so I have a bit of PTSD about negotiations. Kyrsten just was convinced from the very start that this was possible,” Murphy said in an interview on Thursday. “We needed that.”

Burgess and Marianne dive deep into the duo’s dynamic and how the pair, without a leadership role between them, kept negotiations on track and eventually closed the deal: ‘Unwilling to accept defeat’: How Sinema and Murphy clinched guns deal for Dems

GOOD MORNING! Welcome to Huddle, the play-by-play guide to all things Capitol Hill, on this Friday, June 23, where Congress defies the odds.

INVESTIGATE THE INVESTIGATORS? GOTTA WIN FIRST— Before Rep. Rodney Davis (R-Ill.) can be the “mayor of Capitol Hill,” as the chair of the House Administration Committee is sometimes called, where he wants to lead a counterpunch to the Jan. 6 panel, he’ll need to beat his Trump-backed primary opponent. He’s voting to “investigate the investigators,” which could gain him support from Trump loyallists. But Trump has already endorsed House Freedom Caucus member Rep. Mary Miller (R-Ill.) for the redrawn Illinois district.

He isn’t a natural fit to lead the charge against the Jan. 6 panel, given that he voted to certify Biden’s 2020 election win and supported a proposal for a bipartisan Jan. 6 commission. Jordain digs into Davis’ situation: Trump-fueled primary endangers Republican who wants to probe Jan. 6 panel

SPEAKING OF THE INVESTIGATORS— Yesterday’s Jan. 6 committee hearing was one for the history books, with five Republican House members outed as seeking pardons from the Trump administration related to the events leading up to the insurrection. ICYMI, they are: Scott Perry (Pa.), Matt Gaetz (Fla.), Andy Biggs (Ariz.), Louie Gohmert (Texas) and Marjorie Taylor Greene (Ga.). That then sparked a series of denials and dodges from outside the committee room. There was a lot going on, and Kyle and Nicholas do a great job of tying it together: Multiple House Republicans on defensive over Jan. 6 panel testimony that they sought post-riot pardons

It’s tough to meet today’s workforce challenges using yesterday’s technologies. To address this, Workday and the Alliance for Digital Innovation led a discussion on June 22 to highlight strategies, tools, and technologies to address some of today’s most pressing issues in building a public sector workforce. This event featured remarks from Congressman Eric Swalwell and other government leaders who are working to develop a human capital strategy that supports our public sector missions. Click to watch.

NO (UNIVERSAL) FREE LUNCH— The Senate approved by unanimous consent $3 billion to extend pandemic waivers that gave flexibility to schools trying to provide meals to students during the turbulence of the last two years. But the Senate made changes to the House-passed bill, instigated by Sen. Rand Paul (R-Ky.), which means the bill must return to the House for approval before heading to Biden’s desk.

The change Paul insisted on is the revival of a “reduced price” category of the National School Lunch Program. Meals were either free, reduced price or full price for students before the pandemic. But during the extended crises, waivers allowed for blanket free meals. The House’s extension of the waivers included the free and full-price options, but Paul wanted the reduced price option reinserted. The bill is up for consideration at House Rules this morning, alongside the gun measure.

CONDOLENCES — Lisa Price, wife of Rep. David Price (D-N.C.) and founder of a group aiming to reduce gun violence, died on Thursday at age 82. Lisa Price founded North Carolinians Against Gun Violence and was its executive director until her retirement in 2007. She was also active on environmental protection issues, civil rights and animal welfare. More from The News and Observer.

PAUL PELOSI CHARGED— Paul Pelosi, husband of Nancy Pelosi, was charged Thursday with driving under the influence of alcohol causing injury and driving with a BAC of .082, which is over the legal limit, according to a news release from the Napa County District Attorney’s Office.

Heartwarming alert …There was a joyous reunion this week in the Speaker’s Lobby between GOP Rep. Peter Meijer (Mich.) and Capitol Police officer Albert Chow, who served together in the same Army unit. The pair last saw one another in 2015 before their chance encounter on Wednesday. Chow was posted at the metal detector outside the lobby door on the Republican side of the room when Meijer recognized him and came rushing out of the Chamber to ask if he had been in the Army. Chow, who joined the Capitol Police in 2018, thought he had recognized Meijer earlier but wasn’t sure — and he didn’t even know Meijer was elected to Congress in 2020. The two embraced and caught up for the rest of the vote series.

Sniper no sniping… There’s a new (trainee) therapy dog around the Capitol, a precious Aussie-doodle named Sniper. Jordain spent some time with him in the Rayburn basement during House votes last night. Look at this face! Say hi if you see this dog with a job. (Is Sniper a soothing name for a therapy dog? Feels a little aggressive.)

Elevate your practice… Rep. Andy Levin (D-Mich.) brought his yoga practice to the top of the Capitol dome on Thursday. After climbing all those stairs, a good stretch is recommended.

I raise you… The Congressional Progressive Staff Association wants to know if you got a raise from that Members’ Representational Allowance boost. They are circulating a survey for Hill staff (and district office staff) about how offices are using the MRA influx. The group’s previous surveys on the financial precarity many staff find themselves in made waves on the Hill.

Is It Last Call for Lauren Boebert’s Gun Restaurant? From Roger Sollenberger at The Daily Beast

Can Congress be a little more like a tech company? Maybe, from Chris Cioffi at CQ Roll Call

Liz Cheney aims to recruit crossover Democrats in her primary, from Hannah Knowles, Paul Kane and Mariana Alfaro at The Washington Post

Ben Chao is now legislative director for Rep. Mondaire Jones (D-N.Y.). He most recently was special assistant to the deputy comptroller for budget and appropriations affairs at the Defense Department

Vanessa (Morrone) Ambrosini is now director of regional media and rapid response at Stand Together. She most recently was senior comms adviser for Sen. Ron Johnson (R-Wis.) and is a Trump White House and Commerce Department alum. 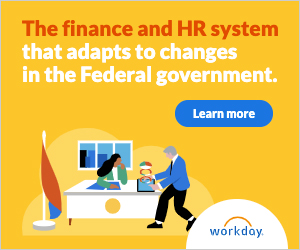 The House convenes at 9 a.m.

The Senate is out.

THURSDAY’S WINNER:Tyler Lowe correctly answered that the first U.S. President to attend a major league baseball game while in office was Benjamin Harrison.

The first person to correctly guess gets a mention in the next edition of Huddle. Send your answers to [email protected]

GET HUDDLEemailed to your phone each morning.

As a leading provider of enterprise cloud applications for finance, HR, and planning, Workday partners with more than 9,500 organizations – spanning healthcare, financial services, retail, hospitality, education, state and local government, and more – to help them adapt and thrive in a changing world of work. Now we’re bringing that expertise to the federal market with Workday Government Cloud. Workday Government Cloud looks to give agencies more time to focus on the strategic initiatives that help further their mission. Workday handles all administrative applications, including upgrades, patches, data security, application availability, backup, disaster recovery, performance tuning, operating system, database, network, storage, and maintenance. Say goodbye to yesterday’s technology, and hello to a new era in software delivery with a system that evolves as your organization evolves. With Workday Government Cloud, you can operate more strategically, hire, and develop a top-performing workforce, and adapt quickly to changes.