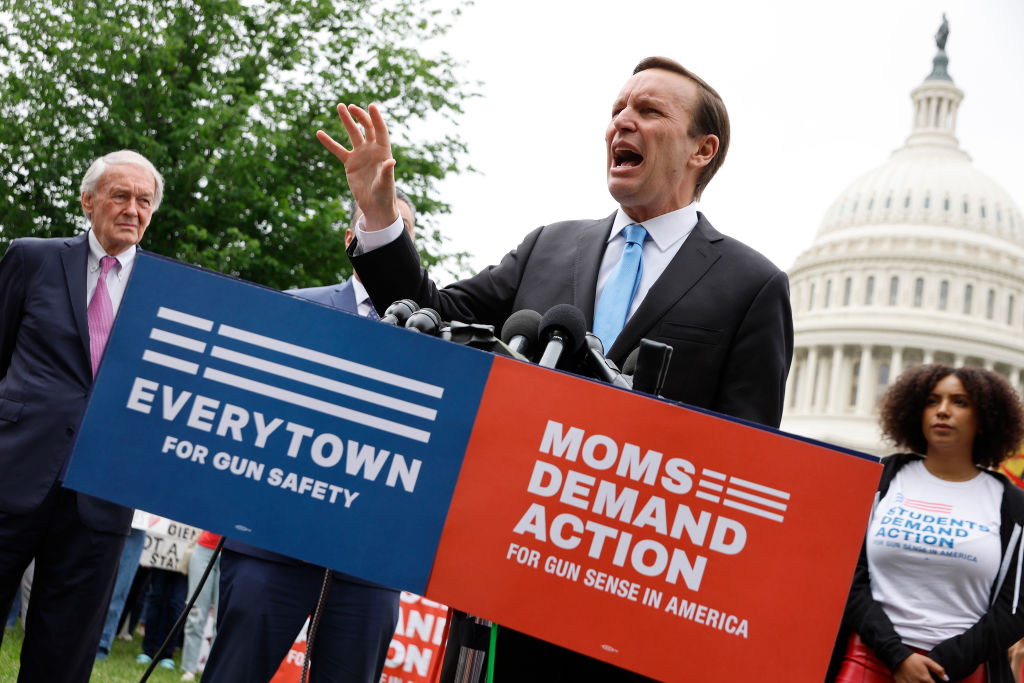 The political spending arms of three prominent gun control groups – Everytown for Gun Safety, Giffords and Brady – raised more than $3.2 million in May compared to just under $2.9 million in the first four months of 2022 combined, a new OpenSecrets analysis of June monthly FEC filings found.

Gun control groups poured more money into outside spending than gun rights organizations for the first time in 2018, but legislative action has not accompanied increased spending until now.

Congress moved to pass meaningful gun safety legislation for the first time in decades amid national calls to act on gun violence after a gunman killed 10 people at the Tops Friendly Market in Buffalo on May 14 and a shooter killed 21 people, including 19 children, at Robb Elementary School in Uvalde, Texas, on May 24.

“The bill text lives up [to] the framework released last week and we now move one big step closer to breaking the 26-year logjam that has blocked Congressional action to protect Americans from gun violence,” John Feinblatt, president of Everytown for Gun Safety, said in a statement released Tuesday.

Senators can “plan to hear from us every day,” said Shannon Watts, founder of Moms Demand Action, which merged with Mayors Against Illegal Guns in 2013 to create Everytown for Gun Safety.

But most of that money came the day before the Buffalo shooting, when Connie Ballmer — who co-founded the philanthropic Ballmer Group with her husband, former Microsoft CEO Steve Ballmer — donated $1.5 million. Ballmer also donated $3.5 million to Everytown for Gun Safety Victory Fund in April 2021.

McBath won her primary in Georgia’s 7th Congressional District on May 24, and she will face Mark Gonsalves in the general election. Cook Political Report rates the seat as solidly Democrat.

Giffords PAC, the Carey committee arm of the gun violence prevention organization Giffords, raised $1.4 million in May compared to almost $1.7 million during the first quarter of 2022. Almost $650,000 came in after the Uvalde shooting on May 24, and donations did not exceed $2,500.

Former Rep. Gabby Giffords (D–Ariz.) co-founded Giffords in the wake of the Sandy Hook Elementary School shooting that killed 26 people, including 20 children. Giffords herself was shot by a gunman who killed six people and injured 12 more at a constituent event in Tucson, Ariz., in 2011.

The former congresswoman praised the bipartisan legislation while noting there is still more work to be done in a statement released Tuesday.

“There is more important work to be done, but this legislation takes important steps needed to protect communities and save lives from gun violence,” she wrote.

None of the four senators who announced the bipartisan legislation are up for reelection until at least 2024, but Giffords PAC has contributed over $148,000 to Democratic candidates so far this cycle and $6,000 to four Republicans who voted “yes” on the House’s proposed gun control bill, the Protect Our Kids Act – $2,000 to Reps. Brian Fitzpatrick (R–Pa.) and Chris Smith (R–N.J.) and $1,000 to Reps. Maria Salazar (R–Fla.) and Fred Upton (R–Mich.).

The gun violence prevention PAC also donated $1,000 to Rep. Carlos Gimenez (R–Fla.), who voted against the House bill but previously voted with Salazar to expand background checks, and to Future First Leadership PAC, which is affiliated with Rep. Adam Kinzinger (R–Ill.), another Republican who voted for the House bill.

Giffords PAC has not yet spent any money on television ads, mailers or other outside spending expenditures during the 2022 midterms.

But PAC arms of prominent gun rights groups struggled with fundraising in the wake of mass shootings, especially when compared to contributions at this point in the 2018 midterm elections.

The National Shooting Sports Foundation PAC saw a steep decline in contributions, raising just $9,000 in May compared to $287,000 during the first quarter of 2022. The PAC has contributed $298,000 to Republican candidates so far this cycle and $7,000 to Democratic candidates. Rep. Jared Golden (D–Maine), one of the only Democrats to vote against the House bill on gun control, received $5,000 from the PAC.

The National Rifle Association Political Victory Fund, the PAC arm of the National Rifle Association, saw a modest dip in contributions in May, bringing in $565,000. This is not the lowest month for the PAC in 2022, which was $436,000 in January, but it is a sharp decline from the $1.2 million the PAC brought in during May 2018, the same point during the last midterm election cycle.

But the NRA PAC still boasts a war chest of over $15.6 million, and it has contributed over $141,000 to Republican candidates so far this cycle. House Minority Whip Steve Scalise (R–La.) has received $9,900, the most money the PAC has contributed to a candidate so far this cycle. Scalise, who nearly died in 2017 when a gunman shot him at a baseball field, remains a vocal critic of gun control legislation.

NBC News reported Scalise and Senate Minority Leader Kevin McCarthy (R–Calif.) told GOP colleagues during a closed-door meeting Wednesday they would push to block the bipartisan legislation. Scalise’s office put out a statement on June 5 criticizing Democrats on the bipartisan committee for proposing legislation that would “encroach on the freedoms of law-abiding citizens” without due process, but his office has not yet released a formal statement on the legislation.

The NRA wasted no time in pushing back on the Bipartisan Safer Communities Act.

“This legislation can be abused to restrict lawful gun purchases, infringe upon the rights of law-abiding Americans, and use federal dollars to fund gun control measures being adopted by state and local politicians,” the group said in a statement released Tuesday.