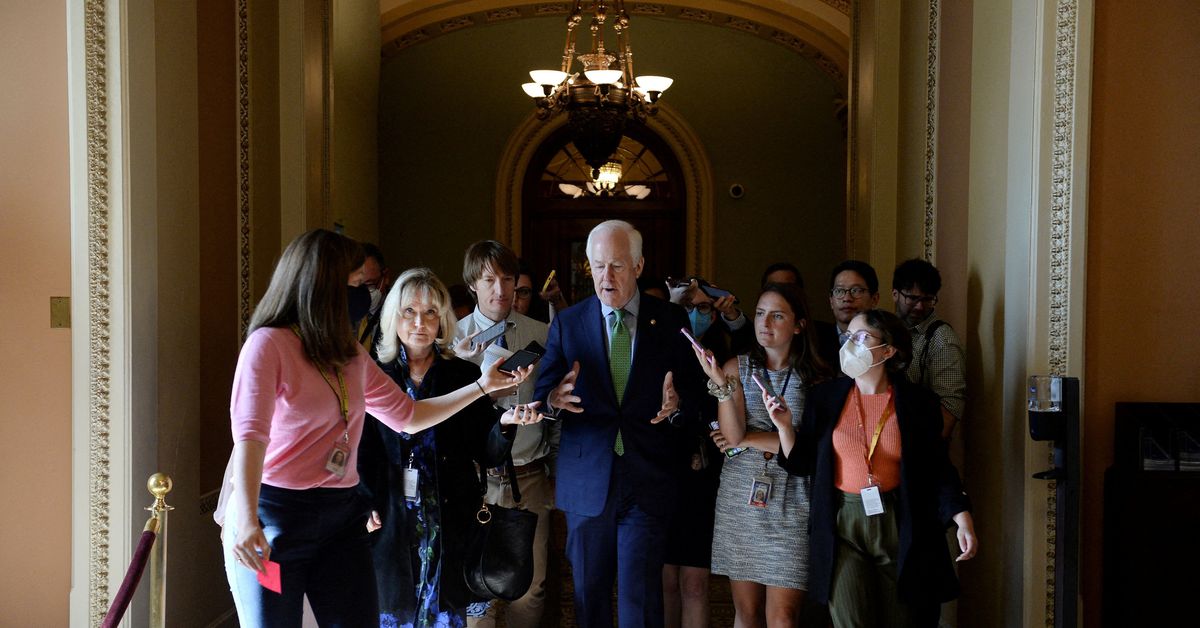 WASHINGTON, June 21 (Reuters) – A bipartisan group of lawmakers released the first significant gun control legislation in decades on Tuesday, paving the way for the U.S. Senate to move to a vote this week, following two mass shootings that killed dozens of people and sent shock waves through a nation plagued by gun violence.

The 80-page bill includes provisions that would help states keep guns out of the hands of those deemed to be a danger to themselves or others and close the so-called boyfriend loophole by blocking gun sales to those convicted of abusing unmarried intimate partners.

After mass shootings at a New York grocery store and a Texas elementary school that authorities said were committed by teenagers, the legislation would allow states to provide juvenile records to the national background check system for gun purchases.

Lawmakers said the Senate was likely to take its first procedural vote later on Tuesday on a motion to proceed to a bill from the House of Representatives that would serve as the Senate’s legislative vehicle.

“I believe that this week, we will pass legislation that will become the most significant piece of anti-gun-violence legislation Congress will have passed in 30 years. This is a breakthrough,” Senator Chris Murphy, the lead Democrat in the talks, said on the Senate floor. “And more importantly, it is a bipartisan breakthrough.”

Senate Majority Leader Chuck Schumer pledged to move forward as soon as possible, with an expected motion to proceed.

“This bipartisan gun-safety legislation is progress and will save lives. While it is not everything we want, this legislation is urgently needed,” Schumer said in a statement.

Schumer’s Republican counterpart, Minority Leader Mitch McConnell, called the legislation “a commonsense package” in a statement pledging his own support.

With the 100-seat Senate split evenly, the legislation will need support from at least 10 Republicans to pass a procedural hurdle.

The biggest gun lobby in the country, the National Rifle Association, said on Twitter that it opposed the legislation because it could be abused to restrict lawful gun purchases. The politically powerful group’s statement could affect how many Republicans vote on the measure.

Senator John Cornyn, the lead Republican negotiator in the bipartisan talks, held out hope the legislation would succeed.

“We know there’s no such thing as a perfect piece of legislation. We are imperfect human beings. But we have to try, and I believe this bill is a step in the right direction,” Cornyn said on the Senate floor.

The legislation’s release on Tuesday would help ensure the odds of Senate passage before lawmakers leave for their two-week July 4 break. Some aides suggested lawmakers could stay into the weekend to vote on the bill.

The bipartisan group has been working on a deal to curb gun violence since a gunman killed 19 children and two teachers at an elementary school in Uvalde, Texas, less than two weeks after 10 people were killed in a racist shooting at a supermarket in Buffalo, New York. read more

The measure announced on Tuesday does not go as far as Democrats including President Joe Biden had sought. Still, if passed, it would be the most significant action to combat gun violence to emerge from Congress in years.

Lawmakers reached agreement on a provision to encourage states to adopt “red flag” laws, in which guns can be temporarily taken away from people who are deemed dangerous. It also provides funding for states that use other forms of intervention to accomplish the same outcome.

The bill also aims to close the “boyfriend loophole” by allowing authorities to block gun purchases by those convicted of misdemeanor domestic abuse against partners to whom they are not married.