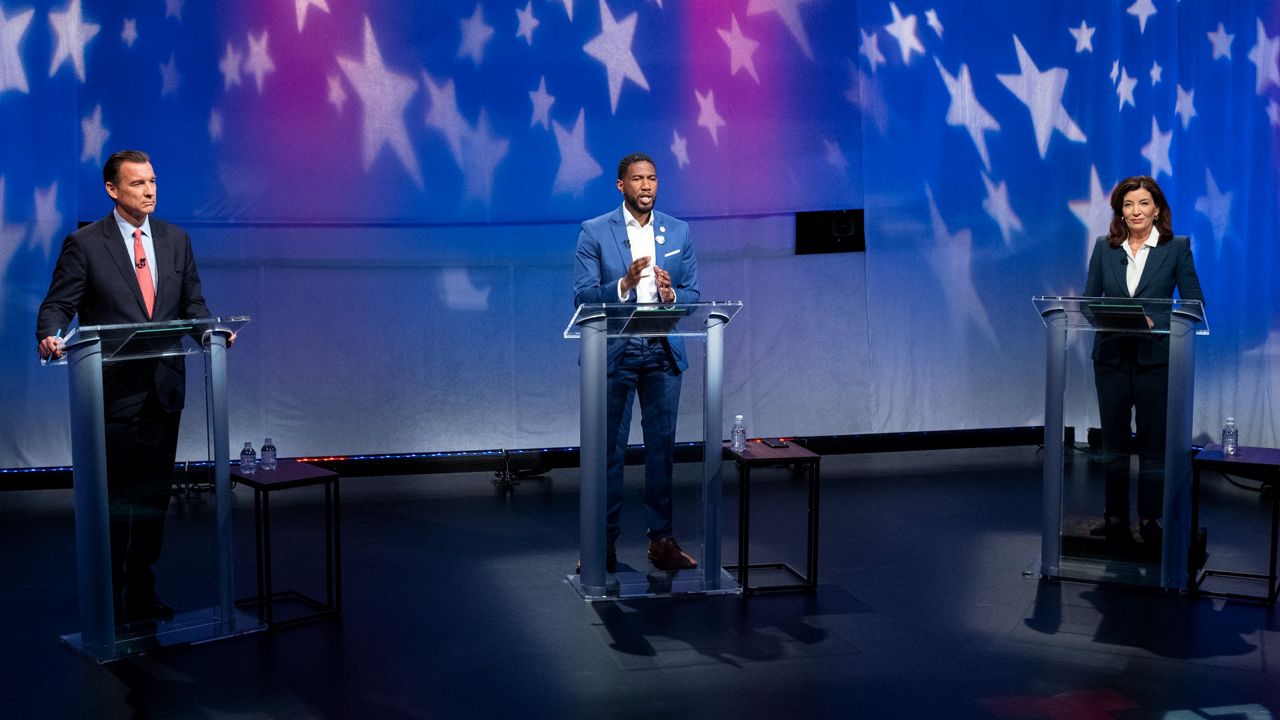 If Tom Suozzi was determined to get in Gov. Kathy Hochul’s space, he certainly managed to do that with his attacks. At one point, he prompt this response from Hochul about whether she once took money from the National Rifle Association.

“I know you want to slough it off,” Suozzi said.

“Excuse me. It’s my turn to answer the question,” snapped Hochul.

“We’ve been waiting months for you to answer the question,” said Suozzi.

“Please, stop interrupting me. The people want to hear my answer,” Hochul shot back.

At other times, the Queens and Long Island Congressman seemed like he was trying his hardest not to be shrugged off by Hochul.

The most heated exchanges took place between Suozzi and Hochul, which left Jumaane Williams on the sidelines at times.

“I’m not on a corruption scandal, but I would like some time also, if that is possible,” Williams said with a laugh.

There were also some substantive answers. Like when Williams, the current public advocate, made his familiar pitch to voters that the wealthy need to pay more in taxes.

.@KathyHochul hums a very different tune on congestion pricing than she did at the last debate.

Hochul says she had a meeting with the White House about it today to try and expedite it.

At the last debate, Hochul said it’s not happening anytime soon. Certainly not within year

“We must raise revenue from the 120 billionaires who have made $220 billion during the pandemic. When the governor says she is not raising taxes, she said that in a room full of millionaires and billionaires and raised $20 million from them,” Williams said.

Hochul was asked whether she would support “Good Cause” eviction, a bill popular among progressives that would give rental tenants extra protections. Some say it goes too far, and it has yet to pass either legislative house in Albany.

“I am focused on what the legislature gives to us. Then I will analyze it. And as I said, let’s keep on getting the money out the door as quickly as we can,” Hochul said.

When asked if they would accept the endorsement of former Gov. Andrew Cuomo who resigned last year in scandal, Suozzi was the only candidate who said he would.

“Yes, I would accept his endorsement. I think that he is still very popular among a lot of people in New York state. While he has a lot of baggage, along with what he has done, he has accomplished a great deal in the state of New York,” Suozzi said.

This was the final debate with all three candidates. Early voting begins on Saturday, with the primary taking place June 28. The winners of that race will take on the Republican ticket in November.