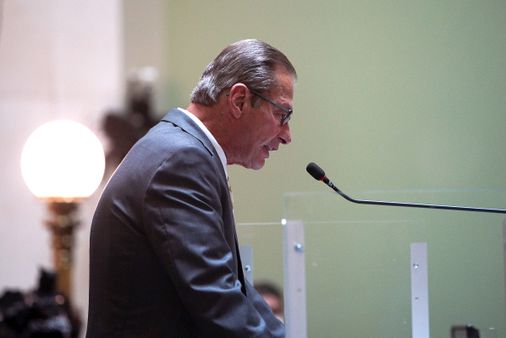 “I have firearms,” he told the Globe. “I’m a Second Amendment person.”

But, Ruggerio added: “We have to do something about what’s happening out there. Every day, it gets worse.”

The mass shootings that have devastated Uvalde, Texas, and Buffalo, New York, haven’t happened in Rhode Island yet. But, he said, something like that could happen here.

Ruggerio spoke to the Globe after the Senate had voted 25 to 11 for a bill that would limit gun magazine capacity to 10 rounds.

“There has to be a limitation on magazine capacity,” Ruggerio said. “I don’t see how you need a 30-shot magazine.”

Ruggerio, the North Providence Democrat with an “A” rating from the National Rifle Association, has played a pivotal role in the passage of gun legislation in Rhode Island.

During Tuesday’s debate, Senate Minority Whip Jessica de la Cruz, a North Smithfield Republican, blasted Senate leaders, saying, “It was corruption of the process. It was dishonest to subvert the proper process to get this bill through committee.”

When asked for his response, Ruggerio said, “I wanted to give everyone an opportunity to vote. I did not want to have it killed in committee.”

In the end, none of the gun bill votes were close. After approving the magazine capacity bill, the Senate voted 31 to 5 for bills to prohibit the open carry of long guns in public and raise the age from 18 to 21 to buy long guns and ammunition.

This was not the first the time Senate leadership had found a way around opposition in the Senate Judiciary Committee to pass high-profile legislation.

De la Cruz said she “had a front row seat to the scheming and machinations” when the Senate passed the 2019 Reproductive Privacy Act, which aims to protect abortion rights in case the US Supreme Court overturned Roe v. Wade.

In that case, Republican leaders showed up at a Senate Judiciary Committee meeting, prepared to kill the bill by using their “ex officio” right to vote in any committee. But then-Senate Judiciary Chair Erin Lynch Prata, a Warwick Democrat, announced that she was transferring the bill to the Health and Human Services Committee — a more friendly venue for the legislation. And the act became law.

Following Tuesday night’s vote, the current Senate Judiciary Committee chairwoman, Cynthia A. Coyne, a Barrington Democrat, hailed passage of the House version of the magazine capacity bill, which she had introduced in the Senate.

“High-capacity magazines have no legitimate purpose for hunting or self-defense,” she said. “They enable shooters to unleash torrents of bullets and inflict maximum harm in mere seconds, making them a tool of the trade for mass shootings, drug trafficking, and gang violence.”

“High-capacity magazines have enabled mass shooters to commit the most devastating, appalling, and most lethal attacks on the public in recent decades,” Caldwell said. “With this bill, we are finally saying we will not tolerate these dangerous weapons. Our neighboring states have already prohibited high-capacity magazines, and we should join them in refusing to accept the risks they present to Rhode Islanders.”