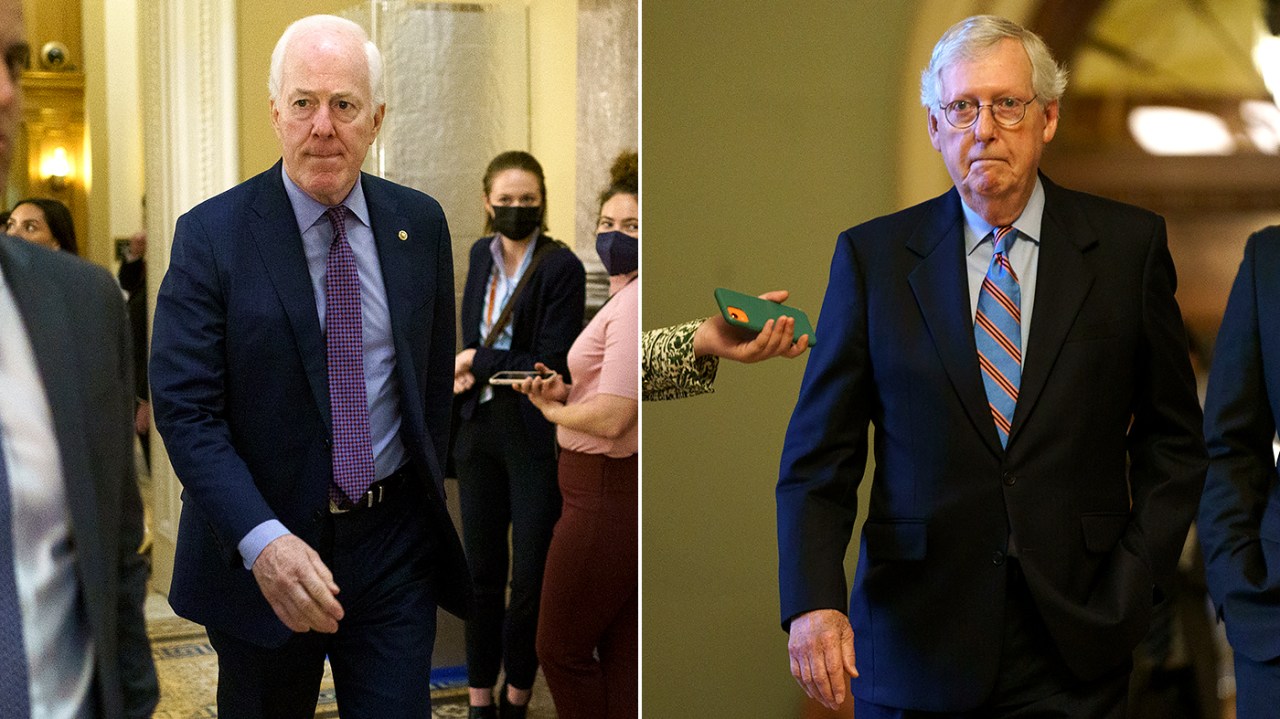 A bipartisan framework to keep guns out of the hands of dangerous individuals and boost funding for mental health treatment has strong momentum after Senate Minority Leader Mitch McConnell (R-Ky.) endorsed it Tuesday.

McConnell says he is planning to vote for legislation based on the framework, which would make him the 11th Republican in the Senate to back it.

That would give the legislation at least 61 votes — one more than necessary to break a filibuster — barring an unexpected meltdown.

“For myself, I’m comfortable with the framework, and if the legislation ends up reflecting what the framework indicates, I’ll be supportive,” McConnell told reporters after the weekly Senate GOP lunch.

Despite his reputation as a staunch partisan, McConnell has been willing to vote against a majority of the Senate Republican Conference at times in order to pass bills he believes are in the nation’s interest.

On Tuesday, he said that passing gun safety legislation in response to the shooting that left 21 people dead in Uvalde “demonstrates to the American people that we can come together, which we have done from time to time on things like infrastructure and postal reform, to make progress for the country.”

Ten other Senate Republicans, led by Sen. John Cornyn (Texas), the chief Republican negotiator, have already signed onto the framework, which would provide billions of dollars in mental health grants to states, restrict convicted domestic abusers and individuals subject to domestic violence restraining orders from buying guns and strengthen background checks for gun buyers between the ages of 18 and 21.

McConnell said a poll of gun owners presented by Cornyn at the Republican lunch on Tuesday showed “support for the provisions of the framework is off the charts” and “overwhelming.”

The GOP leader specifically highlighted the proposal in the framework to give the National Instant Criminal Background Check System access to the juvenile crime records of gun buyers between 18 and 21 years old, praising it as “a step in the right direction.”

Every Democrat is expected to vote for the package, and senators involved in putting the final touches on the text say it could get 65 or more votes including Republicans.

“I think we’ll be well north of 60. I think things feel different to people back home in their states in a way that we haven’t really seen in decades,” said Sen. Martin Heinrich (N.M.), one of the Democratic negotiators, referring to the demand for action in Washington after mass shootings last month in Buffalo, N.Y., and Uvalde, Texas.

Sen. Chris Murphy (Conn.), the lead Democratic negotiator, said “the heavy lifting is done” and expressed confidence that the Senate will pass legislation. “All we’re doing now is taking a framework and putting it into legislative text, and I’m confident that we can get there and get there soon,” he said.

He later hailed McConnell’s endorsement as a significant development.

“Obviously we wouldn’t be in the position we’re in today if Sen. McConnell hadn’t given us the space to have this debate,” he said. “Our goal from the beginning was to get as far north of 60 as we could.”

Republican sources familiar with the negotiation said Cornyn thought from the outset that he had a shot of winning as many as 25 Republican votes for a bill that addressed gun violence without stepping on the rights of law-abiding gun owners.

He quickly ruled out expanding background checks to include all gun show and internet sales, a proposal negotiated by Sens. Pat Toomey (R-Pa.) and Joe Manchin (D-W.Va.) after the 2012 shooting at Sandy Hook Elementary School in Connecticut. That proposal, however, wound up getting only four Republican votes on the Senate floor in April of 2013.

Cornyn rejected several Democratic proposals to restrict gun ownership, including universal background checks, banning people between the ages of 18 and 21 from buying assault-style rifles and a 21-day waiting period for 18- to 21-year-olds for all gun purchases.

One of the biggest questions that negotiators need to resolve is how to pay for the legislation. The mental health component alone is expected to cost at least $7 billion.

Republicans initially floated using unspent coronavirus relief funds to offset the cost of the gun safety bill but received strong pushback from the White House, according to two GOP aides.

Cornyn emphasized the legislation will not create a national red flag law to take guns away from people deemed a danger to their community. Instead, the bill would provide money to states to implement their own gun safety laws.

“The goal is to keep guns out of the hands of people with criminal backgrounds and people with mental health problems, which is the current law,” he said.

“This is going to be from infrastructure to staffing to safety officers at schools. We want to come up with a model of best practices to protect our children at schools,” he said.

One Republican senator who attended Tuesday’s lunch said there was “general debate” over the framework within the caucus, with some GOP lawmakers warning about ensuring due process for people who are stripped of their guns under state red flag laws.

“People said what you expected them to say,” the lawmaker said, referring to senators such as Sens. Roger Marshall (R-Kan.) and Steve Daines (R-Mont.), who last week voiced concern about red flag legislation.

Many Republican lawmakers are waiting to see the legislative text of the proposal and what stance the National Rifle Association (NRA), a powerful gun rights group, takes.

The NRA on Sunday said it “will make our position known when the full text of the bill is available for review.”