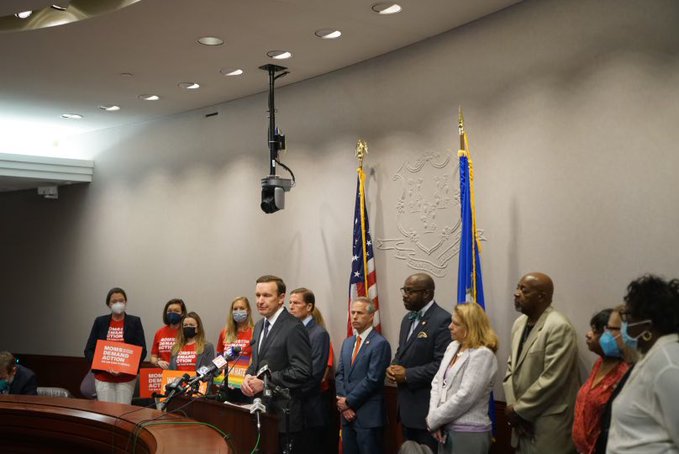 A bipartisan group of senators have announced an agreement on a framework for a historic gun reform deal that could see a safety bill be approved.

The agreement reached over the weekend and announced on Monday, June 13, has been lauded by President Joe Biden. The agreement includes support for state “red flag” laws keeping firearms from potentially dangerous people, tougher criminal background checks for gun buyers under age 21 and a crackdown on “straw purchases” by people buying weapons for others who could not pass a background check.

The deal follows the latest shooting at an elementary school in Uvalde, Texas and a supermarket in Buffalo, New York. Although the framework is less ambitious than proposals offered by Biden and other Democrats that would see the banning of semi-automatic, assault-style rifles and high-capacity magazines or at least raising the minimum age to buy those from 18 to 21.

Democratic Senator Chris Murphy, who led the negotiating effort alongside Republican Senator John Cornyn, said that he hoped for the bill to go through the Senate during the summer and hopefully before August.

Speaking to Reuters he said: “The heavy lifting is behind us” he added that “a significant amount of work remains.

Passing the bill through the Senate could still prove difficult with legislative wording needed that would be acceptable to enough within both the House of Representatives and the Senate to attract sufficient votes. Although both are controlled by the Democrats they don’t have a sufficient majority for a clear passage.

Strong opposition is expected from the Republicans who have traditionally blocked any gun reform that would restrict ownership, despite the country having one of the highest death rates from shootings and certainly the highest murder of children in the western world.

Many cherish gun rights in the US and its Constitution’s Second Amendment protects the right to “keep and bear arms.”

Murphy, who represents Connecticut, has dedicated a major part of his decade-long Senate career to gun control following that tragedy. He and Cornyn said in a joint statement: “Our plan saves lives while also protecting the constitutional rights of law-abiding Americans.”

The group agreeing to the framework included 10 Republicans, nine Democrats and one independent who caucuses with the Democrats.

Importantly the 10 Republican supporters give those in favour enough support to override the Filibuster rule that requires 60 of the 100 in the Senate to vote yes a bill for a bill to be accepted into law. However, those opposed are expected to mount procedural hurdles in a bid to block it.

A National Rifle Association spokesperson said the influential firearms rights group will not take a position on the framework until the detailed legislative text is finalized. She said the NRA would oppose any effort to deprive Americans of their gun rights.

Although not yet voted into law, the historic gun reform deal reached by Democrats and Republicans is a significant step forward in a decades-old fight to bring some restrictions to the right to bear arms.

Thank you for taking the time to read this article, do remember to come back and check The Euro Weekly News website for all your up-to-date local and international news stories and remember, you can also follow us on Facebook and Instagram.