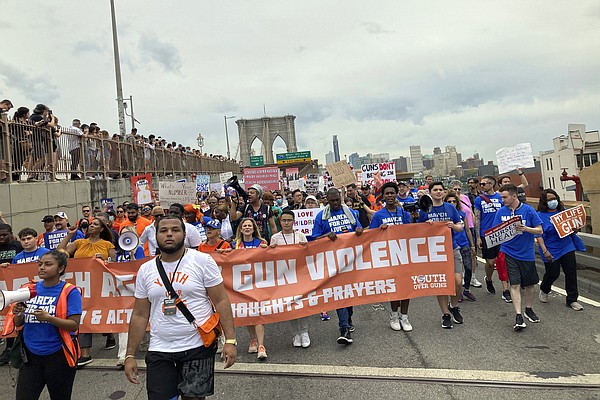 Leaders hope to push any agreement into law rapidly — they hope this month — before the political momentum fades that has been stirred by the recent mass shootings in Buffalo, N.Y., and Uvalde, Texas. Participants cautioned that final details and legislative language remain to be completed, meaning fresh disputes and delays might emerge.

“Families are scared, and it is our duty to come together and get something done that will help restore their sense of safety and security in their communities,” the lawmakers said. The group, led by Sens. Chris Murphy, D-Conn., John Cornyn, R-Texas, Thom Tillis, R-N.C., and Kyrsten Sinema, D-Ariz., produced the agreement after two weeks of private talks.

The compromise would make the juvenile records of gun buyers under age 21 available when they undergo background checks. The suspects in the killings of 10 Black people at a grocery store in Buffalo and 19 students and two teachers at an elementary school in Uvalde were both 18, and many perpetrators of recent years’ mass shootings have been young.

The agreement would offer money to states to enact and put in place “red flag” laws that make it easier to temporarily take guns from people considered potentially violent, plus funds to bolster school safety and mental health programs.

Some people who informally sell guns for profit would be required to obtain federal dealers’ licenses, which means they would have to conduct background checks of buyers. Convicted domestic abusers who do not live with a former partner, such as estranged ex-boyfriends, would be barred from buying firearms, and it would be a crime for a person to legally purchase a weapon for someone who would not qualify for ownership.

Congressional aides said billions of dollars would be spent expanding the number of community mental health centers and suicide prevention programs. But they said some spending decisions are unresolved, as are final wording on juvenile records and other gun provisions that might prove contentious.

Senate Majority Leader Charles Schumer, D-N.Y., called the accord “a good first step to ending the persistent inaction to the gun violence epidemic” and said he would bring the completed measure to a vote as soon as possible.

The agreement was quickly endorsed by groups that support gun restrictions, including Brady, Everytown for Gun Safety and March for Our Lives, which organized rallies held around the country on Saturday.

The National Rifle Association said in a statement that it opposes gun control and infringing on people’s “fundamental right to protect themselves and their loved ones,” but supports strengthening school security, mental health and law enforcement. The group has long exerted its sway with millions of firearms-owning voters to derail gun control drives in Congress.

The agreement represents a lowest common denominator compromise on gun violence, not a complete sea change in Congress. Lawmakers have demonstrated a newfound desire to move ahead after saying their constituents have shown a heightened desire for congressional action since Buffalo and Uvalde, but Republicans still oppose more sweeping steps that Democrats want and Sunday’s agreement omits.

These include banning assault-style firearms such as the AR-15 style rifles used in Buffalo and Uvalde, or raising the legal age for buying them. AR-15s are popular and powerful semi-automatic weapons that can fire high-capacity magazines and have been used in many of the nation’s highest-profile slaughters in recent years. One of them, the killing of 49 people at the Pulse nightclub in Orlando, Fla., occurred six years ago Sunday.

Highlighting that, the Democratic-controlled House approved sweeping bills last week barring sales of semi-automatic weapons to people under age 21 and large-capacity magazines, and giving federal courts the power to rule when local authorities want to remove guns from people considered dangerous. Currently, only 19 states and the District of Columbia have red-flag laws. Republicans can block those measures in the Senate.

Democrats, whose voters overwhelmingly favor gun restrictions, have been reluctant to approve incremental steps that they have thought would let GOP lawmakers argue they have tried stemming the tide of violence without meaningfully addressing the problem.

With the U.S. Senate unlikely to pass a “red flag” bill and the majority of state legislatures having taken no action on gun safety in recent years, or moving in the opposite direction, activists see voter-driven initiatives as a viable alternative.

“To get really strong action at this moment in time, it’s going to take people in a democracy to exercise that democratic right to get on the ballot and get it voted for,” said the Rev. Mark Knutson, a chief petitioner of the Oregon initiative.

Oregon appears to be the only state in America with a gun safety initiative underway for the 2022 election, according to Sean Holihan, state legislative director for Giffords, an organization dedicated to saving lives from gun violence.

If the initiative gets on the ballot and it passes, anyone wanting to acquire a firearm would first have to get a permit, valid for five years, from local law enforcement after completing safety training, passing a criminal background check and meeting other requirements. The measure would ban ammunition magazines over 10 rounds, except for current owners, law enforcement and the military, and the state police would create a firearms database.

The National Rifle Association’s Institute for Legislative Action has already come out strongly against the initiative, saying on its website that “these anti-gun citizens are coming after YOU, the law-abiding firearm owners of Oregon, and YOUR guns. They don’t care about the Constitution, your right to keep and bear arms, or your God-given right of self-defense.”

Knutson says the effort in Oregon “can start to build hope across the nation for others to do the same.”

In 2018, Washington state voters approved restrictions on the purchase and ownership of firearms, including raising the minimum purchasing age to 21, adding background checks and increasing waiting periods. In 2016, voters there overwhelmingly approved a measure authorizing courts to issue extreme risk protection orders to remove an individual’s access to firearms.

California voters in 2016 passed a measure prohibiting the possession of large-capacity ammunition magazines and requiring certain individuals to pass a background check to buy ammunition.

The same year, voters in Maine narrowly defeated a proposal to require background checks before a gun sale.

Daniel Webster, co-director of the Center for Gun Violence Solutions at Johns Hopkins University, said ballot initiatives “are a great way to advance gun policies that are popular.”

“But I honestly don’t know how much one state’s ballot initiative affects the likelihood of other states taking action,” he added.

Meanwhile, pro-gun activists are also using ballot initiatives to protect what they see as their Second Amendment rights.

Voters in Iowa this November will decide whether to add gun rights language to their state constitution, after majority Republicans in the Legislature passed a resolution last year that got it onto the ballot, with no signature-gathering required.

Opponents said if the Iowa measure passes, courts might wind up striking down restrictions on gun background checks, permits required to carry a gun, and a ban on gun possession by people convicted of a felony.

An initiative in Nebraska, one of several there this year, would allow concealed or open-carry weapons to be carried in public places. And in Washington state, an initiative would prohibit state and local governments imposing limits on purchasing and owning firearms.

Information for this article was contributed by Andrew Selsky of The Associated Press. 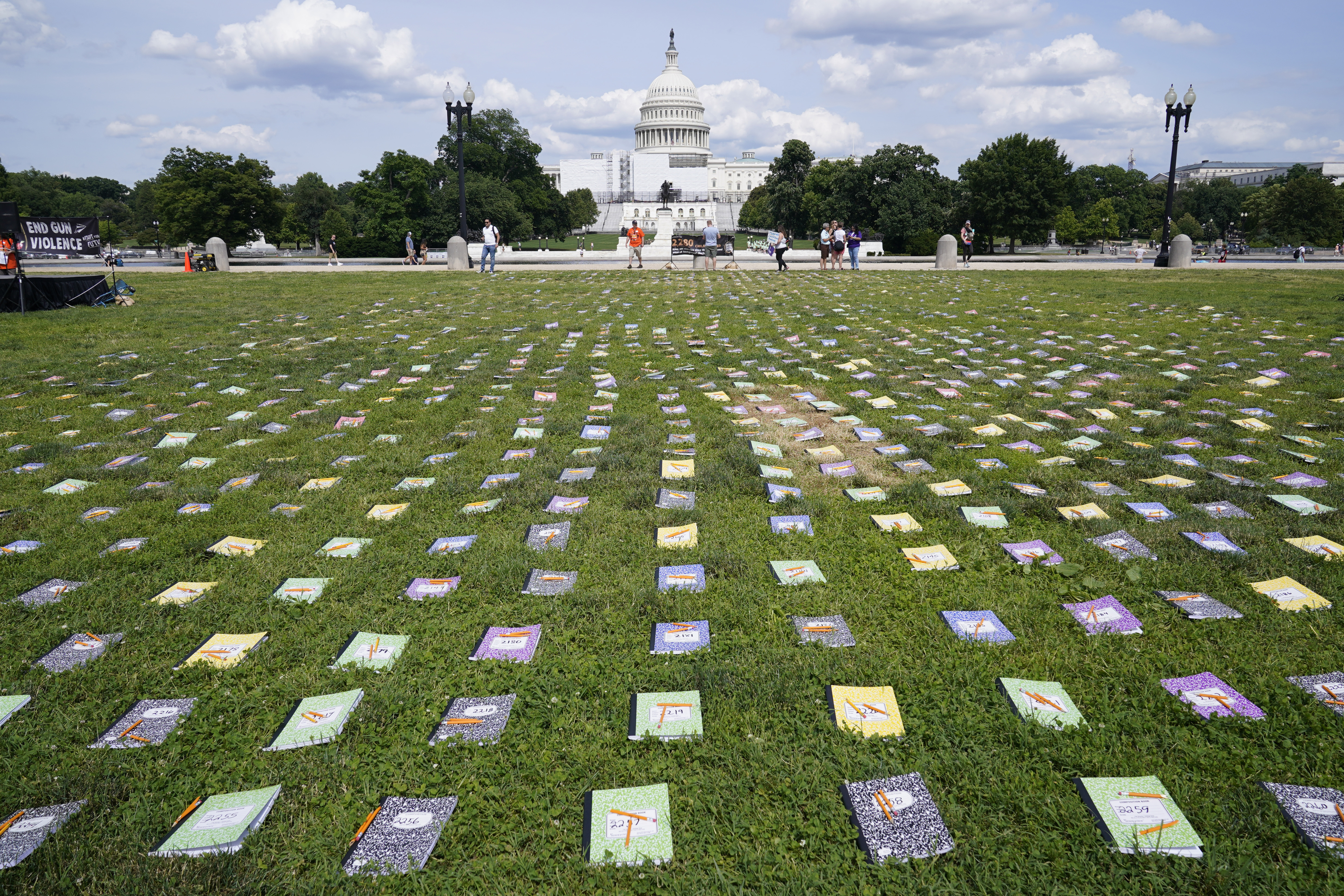 Laid out near the U.S. Capitol are 2,280 schoolbooks and broken pencils that represent the 2,280 children that have been killed by gun violence since the Senate has refused to bring a vote on background checks, during a rally in Washington, Friday, June 10, 2022. (AP Photo/Susan Walsh) 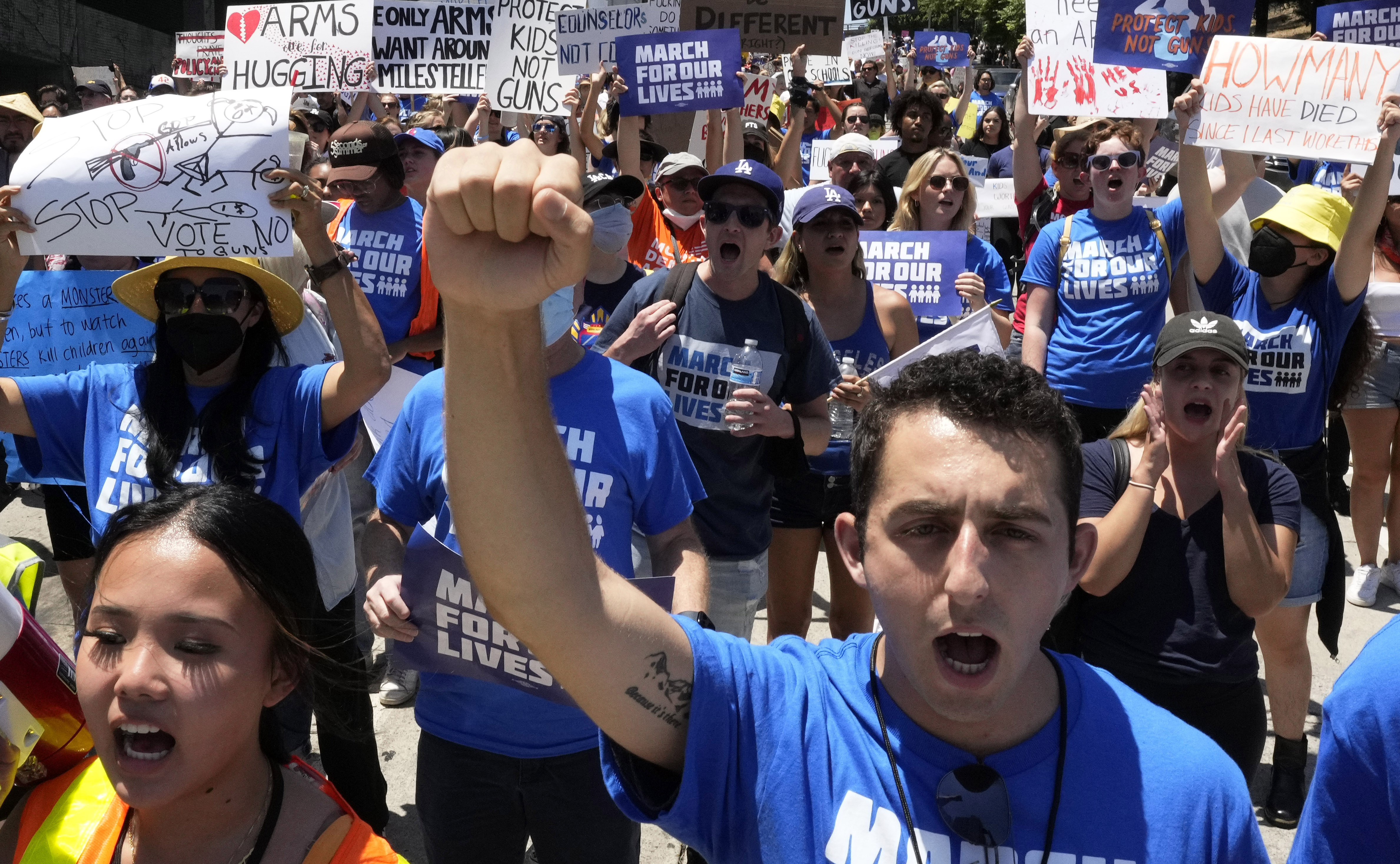 Badim Trubetskoy, of Boston, and a recent graduate of the University of Southern California, marches in downtown Los Angeles during a gun control rally in Los Angeles on Saturday, June 11, 2022. (Keith Birmingham/The Orange County Register via AP) 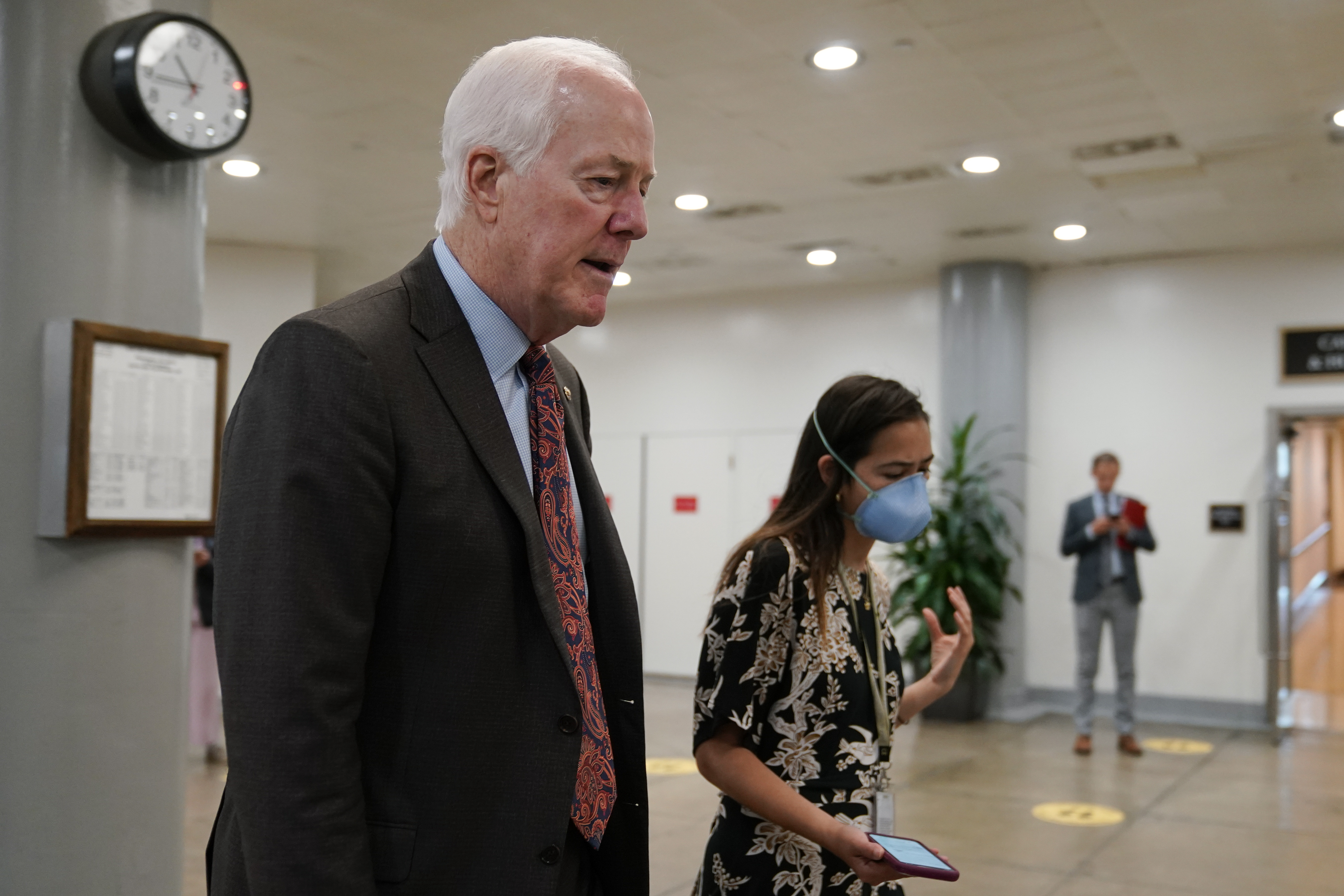 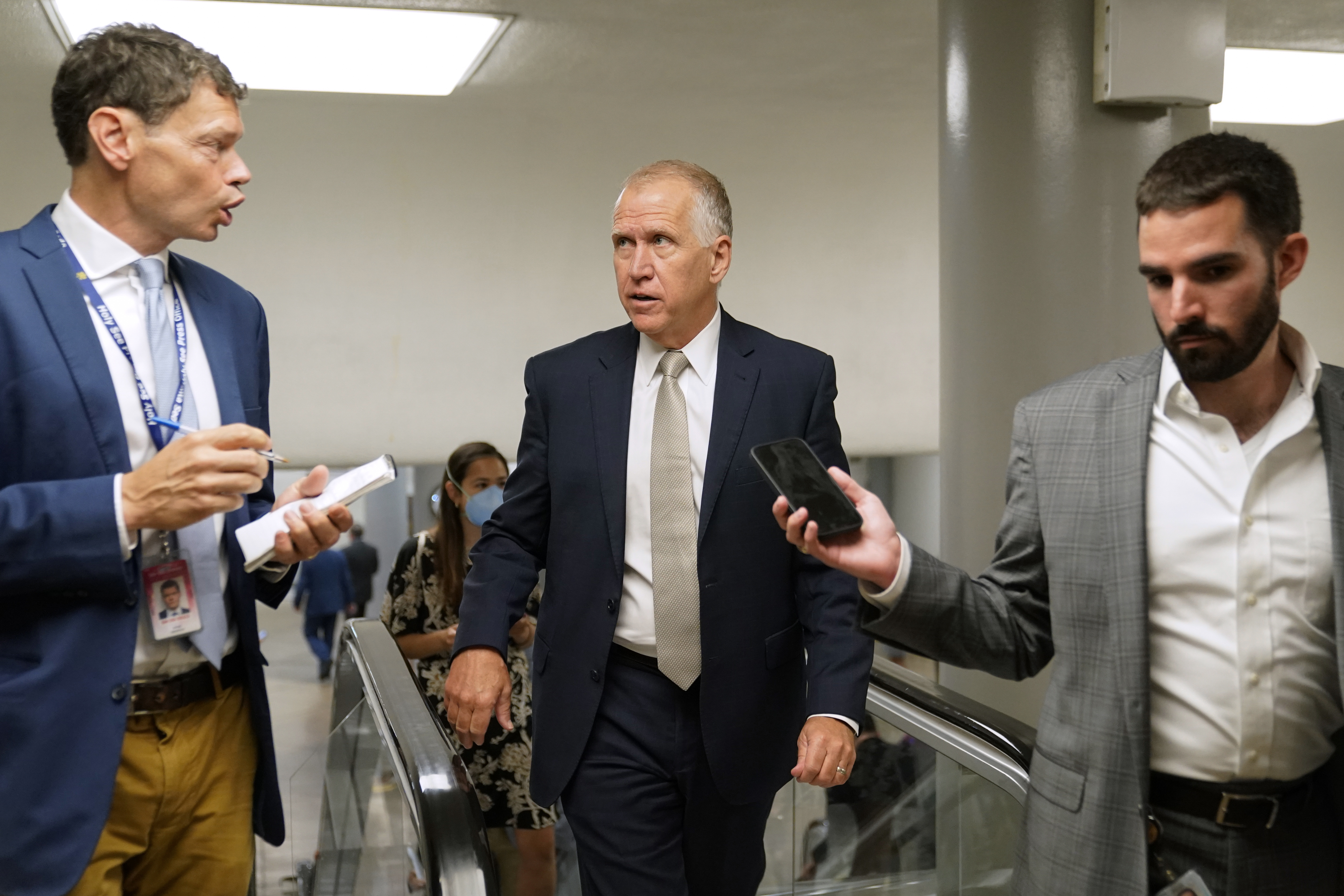 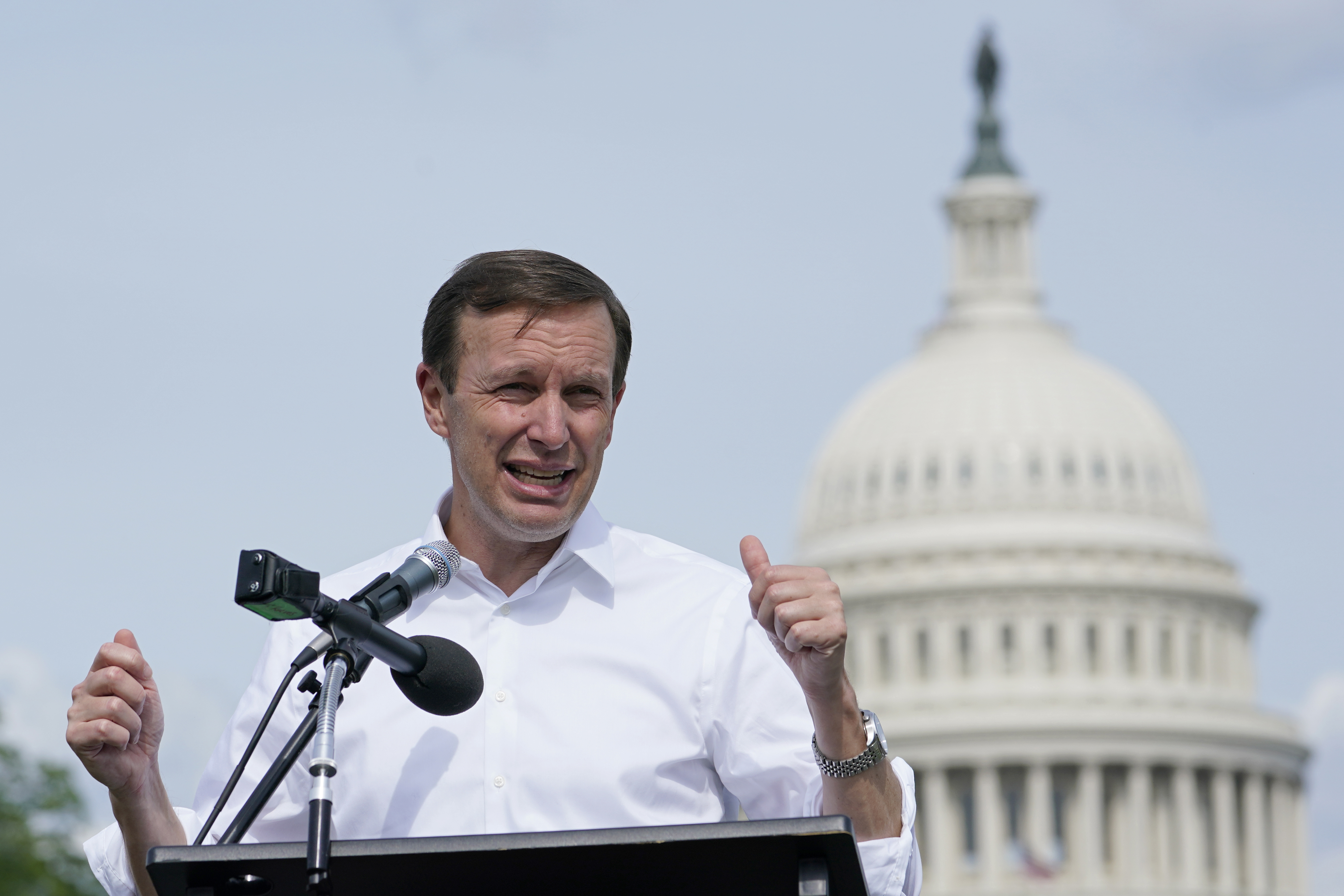 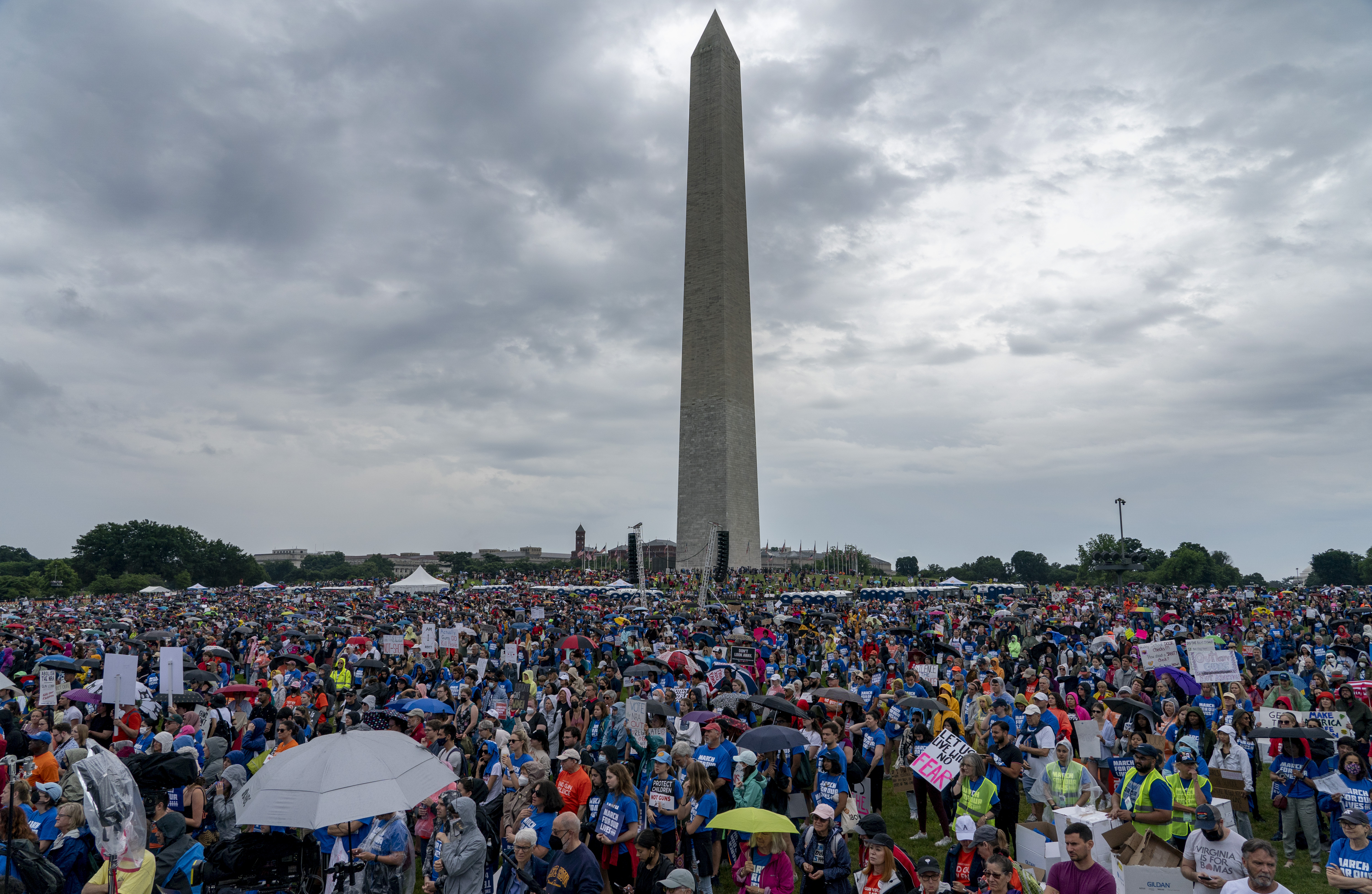 People participate in the second March for Our Lives rally in support of gun control in front of the Washington Monument, Saturday, June 11, 2022, in Washington. The rally is a successor to the 2018 march organized by student protestors after the mass shooting at a high school in Parkland, Fla. (AP Photo/Gemunu Amarasinghe)
This article was originally published by Einnews.com. Read the original article here.
You Might Like