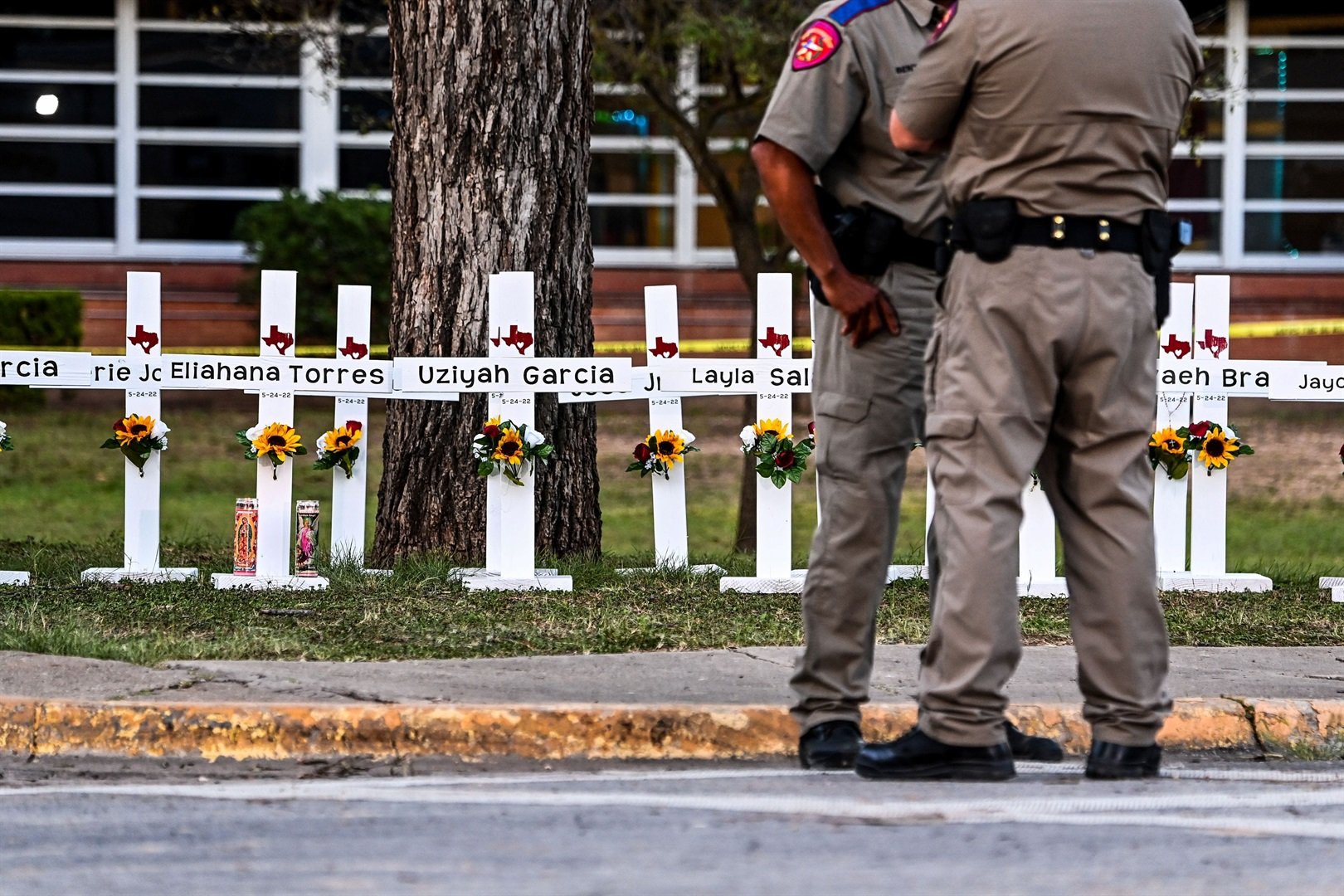 Police officers stand near a makeshift memorial for the shooting victims at Robb Elementary School in Uvalde, Texas, on May 26, 2022.

A bipartisan group of US senators on Sunday proposed steps to curb gun violence following devastating mass shootings in Texas and New York, but the limited measures fall far short of the president’s calls for change.

The shootings in May – one at a Texas elementary school that killed 19 young children and two teachers, and another at a New York supermarket that left 10 Black people dead – have piled pressure on politicians to take action.

But Republicans lawmakers, who have repeatedly blocked tougher measures, are still resisting major changes to gun regulations, instead pointing to mental health issues as the root of the problem.

The new proposals include tougher background checks for gun buyers under 21, increasing resources for states to keep weapons out of the hands of people deemed a risk, and cracking down on illegal gun purchases.

“Today, we are announcing a common sense, bipartisan proposal to protect America’s children, keep our schools safe, and reduce the threat of violence across our country,” the group of 20 Democratic and Republican lawmakers said in a statement.

Our plan increases needed mental health resources, improves school safety and support for students, and helps ensure dangerous criminals and those who are adjudicated as mentally ill can’t purchase weapons.

The senators also called for increased investment in mental health services and school safety resources, as well as including domestic violence convictions and restraining orders in the national background check database.

President Joe Biden praised the announcement and urged lawmakers to pass it quickly, while making clear that the proposals do not go far enough.

“Obviously, it does not do everything that I think is needed, but it reflects important steps in the right direction, and would be the most significant gun safety legislation to pass Congress in decades,” he said in a statement.

“With bipartisan support, there are no excuses for delay, and no reason why it should not quickly move through the Senate and the House.”

The president had pushed for more substantive reforms, including a ban on assault rifles – which were used in both the Texas and New York shootings – or at least an increase in the age at which they can be purchased.

He had also urged lawmakers to ban high-capacity magazines, mandate safe storage of firearms, and allow gun manufacturers to be held liable for crimes committed with their products.

The Democrat-controlled House of Representatives passed a broad package of proposals that included raising the purchasing age for most semi-automatic rifles from 18 to 21.

But the party does not have the requisite 60 votes to advance it in the Senate, leaving the bipartisan deal as the only hope for federal measures to address firearms violence.

Frequent mass shootings have led to widespread outrage in the United States, where a majority of people support tighter gun laws, but opposition from many Republican lawmakers and voters has long been a hurdle to major changes.

A strong supporter of gun rights is the National Rifle Association, which has been weakened by scandals and was hit by a lawsuit from New York State’s attorney general, but it still wields considerable influence.

“The media, leftist politicians, and gun-hating activists are bullying NRA members and gun owners because they want us to give up. We won’t bend a knee,” the lobby tweeted on Saturday.

That day, thousands of people took to the streets in the United States to push for action on gun violence, protesting in Washington, New York and locations across the country.

“The will of the American people is being subverted by a minority,” said protestor Cynthia Martins, a 63-year-old resident of the US capital. “Hand wringing is not going to do anything – you have to make your voice heard.”

We want to hear your views on the news. Subscribe to News24 to be part of the conversation in the comments section of this article.