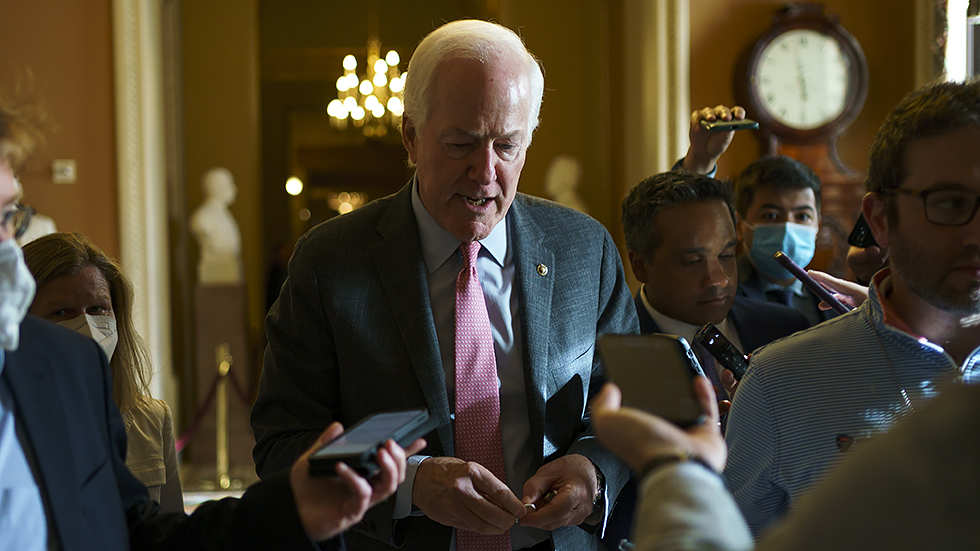 Negotiations on a gun-violence package are boosting the national profile of Sen. John Cornyn (R-Texas), one of the leading candidates to someday replace Mitch McConnell (Ky.) as Senate Republican leader.

Senate Republican aides and strategists say the high-stakes negotiations give Cornyn an opportunity to score a major accomplishment, which could bolster his chances in a future leadership election.

Helping to pass a gun-violence bill that takes the issue off the table ahead of the midterm election will likely burnish his reputation as someone who’s able to do a tough job for the good of fellow Senate Republicans.

Senate Republicans worry that if they don’t pass gun-violence legislation, Democrats will denounce them as obstructionist and try to use the issue to move suburban women and other swing voters in the November election.

One senator familiar with McConnell’s thinking said the Republican leader believes it’s important to show voters that Republicans can govern by negotiating a gun-violence package with Democrats that responds to the mass shooting in Uvalde, Texas. But McConnell doesn’t want to go so far as to anger Second Amendment voters.

“It’s a sign that McConnell actually wants something we can vote on and pass,” the senator said of McConnell’s decision to appoint Cornyn as the lead GOP negotiator.

McConnell says he wants a bill to pass.

“Step one is to try to get a deal, as I’ve said repeatedly I hope that will be sooner rather than later,” he said.

And he praised Cornyn as someone who “knows more about this subject than anybody we have in the Senate.”

Other Republicans, such as Sens. Susan Collins (R-Maine) or Pat Toomey (R-Pa.), may be more likely to be found in the midst of bipartisan negotiations, but aides said Senate Republicans generally have less faith they can negotiate a package that can get 10 GOP votes and overcome a Senate filibuster.

One Senate Republican aide said that if Cornyn can strike a deal on gun-violence legislation, “it provides a heat shield for other members.”

“We don’t know how this will end, I think Cornyn has credibility on the issue with Republicans and Democrats. Most people understand he won’t cut a bad deal and perhaps will get a better deal than a more freewheeling discussion with Toomey or Colins,” the aide said.

“I think this is probably a good example of how he would run the Senate [as GOP leader.] There’s a risk because it’s a hot-button issue but our members appreciate that someone is willing to step up and steer this in the right direction because they know this is a hard thing to do,” the source added.

Senators and Senate aides say if Cornyn can deliver on the gun violence issue, it will show he shares McConnell’s ability to put together a big deal under challenging political circumstances when his party needs it.

Several of McConnell’s biggest moments as Senate GOP leader came when he had to take the thorny issue of raising the federal debt limit off the table by working with Democrats.

That happened most recently in December when McConnell negotiated a one-time exemption to the filibuster in order to raise the debt ceiling.

McConnell had to take another tough vote for his GOP colleagues in February of 2014, when Sen. Ted Cruz (R-Texas), who was ramping up for a presidential run, forced Republicans to vote with Democrats to overcome a filibuster of another debt-limit measure.

Aides and strategists warn that Cornyn must proceed cautiously. If he cuts a weak deal with Democrats, it will draw the criticism from conservatives and gun-rights groups, which won’t help his aspiration to one day become the next Senate GOP leader.

“Gun control is a hot-button issue with conservatives,” said Brian Darling, a GOP strategist and former Senate aide, who pointed to the failure of the Manchin-Toomey amendment to expand background checks in 2013 as evidence for how unpopular the issue is with conservatives.

“Republican politicians understand that supporting gun control is very bad for their future,” he added. “It’s really a terrible political idea to push these ideas and team up with Democrats to pass gun control.”

The amendment Toomey negotiated with Sen. Joe Manchin (D-W.Va.) to expand background checks for gun sales after the mass-shooting at Sandy Hook Elementary School was seen as a common-sense, modest proposal in 2013. It was even crafted with input from the powerful National Rifle Association (NRA).

But the amendment wound up getting only four Republican votes and failing on the Senate floor.

Toomey later saw his A-rating get downgraded to a C by the NRA.

The warning to other Republicans was clear: Negotiate with Democrats on gun control and face the wrath of gun-rights advocates.

Nine years later, every member of McConnell’s leadership team, including McConnell himself, has at least an A rating from the NRA.

If Cornyn hammers out a deal with Democrats, senators will be watching closely which members of McConnell’s leadership team votes for it.

Cornyn and Senate Minority Whip John Thune (R-S.D.) are seen as the two leading candidates to succeed McConnell as the top Senate Republican leader, though McConnell has said he plans to serve at least another term as leader in 2023 and 2024.

Cornyn and Thune both have A-plus NRA ratings.

Cornyn served as Senate Republican whip, the No. 2 role in the Senate GOP leadership, from 2013 to 2019, when he stepped down because of term limits.

Since leaving the elected Senate leadership, Cornyn has continued to attend McConnell’s Monday leadership meetings as an adviser but he doesn’t have the same platform that he used to have.

For example, Cornyn no longer attends the weekly leadership press conferences on Tuesdays and when senators and members of the media have questions about the schedule or where the votes are lining up on a big issue, they often go first to Thune, the whip.

Thune also holds regular whip meetings in his office, giving him a team of allies who could be helpful in a future leadership race. If Thune wins re-election as is expected, he will hold the whip’s job through the end of 2024, when he will also face a term limit.

Cornyn is aiming for a deal with Democrats that would strengthen the national instant criminal background checks system and keep firearms out of the hands of people with criminal histories and mental illness, but not expand background checks to make it tougher for law-abiding citizens to buy guns.

Senate Republicans familiar with the talks say he wants to craft a deal that can get the support of close to half the Senate Republican conference. But it’s also possible that a bipartisan gun-violence package struggles to get just 10 GOP votes.

McConnell, when asked about the likelihood of a gun-violence bill getting more than handful of Republican votes, said it’s too early to speculate on the outcome.

Senate Republican Policy Committee Chairman Roy Blunt (R-Mo.) is viewed as a possible “yes” vote because he is retiring at the end of the year.

And Sen. Joni Ernst (R-Iowa), who says she is open to raising the minimum age for buying an AR-15-style rifle to 21, is considered another possible “yes.”

But National Republican Senatorial Campaign Committee Chairman Rick Scott (R-Fla.) is viewed as a likely no because he is potential future presidential candidate.

But many more Republican senators have held back from criticizing the emerging package, showing deference to Cornyn who asked his colleagues to keep their “powder dry” while the talks are underway, according to Sen. Charles Grassley (R-Iowa).