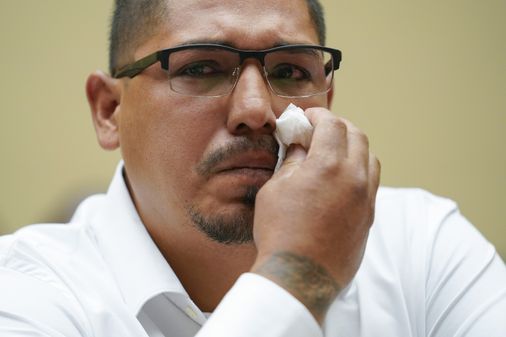 To save her life after a gunman shot her teacher and classmates, Miah Cerrillo played dead.

“I thought he was going to come back to the room so I grabbed the blood [of her murdered friend] and I put it all over me,” said the 11-year-old survivor of the Robb Elementary School massacre in Uvalde, Texas, speaking via video Wednesday during an emotional House committee hearing on gun violence.

In a nation where one political party values guns more than children, Miah probably won’t be the last kid forced to do the unthinkable. She wasn’t even the first. Years earlier at a Black church in Charleston, S.C., a 5-year-old played dead to survive a white supremacist’s murderous wrath.

That girl is now around the same age as the girl in Uvalde. That’s about all that’s changed in the only nation where mass shootings outpace days of the year.

Under the shadow of recent massacres in Uvalde and at a Buffalo supermarket, this month brings the somber anniversaries of two other mass shootings. Sunday will mark six years since a man armed with an AR-15 style rifle killed 49 people at Pulse, an LGBTQ+ nightclub in Orlando. And seven years ago on June 17, a white supremacist murdered nine Black people who welcomed him into their evening Bible study at historic Emanuel AME Church in Charleston.

After each atrocity, we were assured that things would be different. Thoughts and prayers would beget legislative urgency. Moments of silence would yield to votes for meaningful gun reform. Then Republicans did what they have done for decades: wait out the public fervor and do nothing.

During his eulogy for Reverend Clementa Pinckney, pastor of “Mother” Emanuel church, President Obama sang “Amazing Grace.” Republicans who controlled both the House and the Senate showed none. A year after Orlando, not a single bill was passed in response to what was then the deadliest mass shooting in modern American history. Bill Nelson, a Democratic senator from Florida, said, “What am I going to tell the community of Orlando? Sadly, what I’m going to tell them is the NRA won again.”

Last month, 10 Black people were gunned down by an 18-year-old alleged white supremacist at a Buffalo supermarket. Less than two weeks later, 19 children and two teachers were killed in Uvalde by another 18-year-old who also legally purchased an AR-15 style rifle. On Wednesday, the Democratic-controlled House passed the Protecting Our Kids Act, which bars those under 21 from purchasing semi-automatic weapons and bans sales of high-capacity magazines.

Yet the National Rifle Association will probably win again; that bill stands little chance in the Senate as Republicans blame everything but guns. They’ve pointed at mental health, social media, fatherlessness, and too many doors in schools. Now they’re including that old-time religion — or as bombastic Representative Louie Gohmert of Texas put it, “We wouldn’t have the mass killings like we didn’t have before prayer was eliminated from schools.”

Republicans have more talking points than moral fortitude. As we saw after the Sandy Hook massacre in 2012, there is no tragedy heinous enough to move the needle toward bipartisan legislation against gun violence. All that changes are the body counts. Uvalde joined schools in Newtown, Conn., Parkland, Fla., and too many others stained by the blood of children. With racism and hate as an accelerant, Buffalo tracks El Paso, Pittsburgh, and Charleston.

At 86, Ruth Whitfield was the oldest person killed in the Buffalo massacre. At a House committee hearing, Her son Garnell Whitfield Jr. called out the white supremacist ideas that reportedly led to her death, but he also challenged Congress.

“Is there nothing that you are personally willing to do to stop the cancer of white supremacy and the domestic terrorism it inspires?” he asked. “Because if there is nothing, then, respectfully senators, you should yield your positions of authority and influence to others that are willing to lead on this issue. The urgency of the moment demands no less.”

The urgency of the moment demands what Republicans are unwilling to do — protect Americans. Meanwhile, the filibuster gives them more cover than any of us have from someone stalking our communities with a weapon of war.

Gun reform after Charleston and Orlando might have averted the massacres in Buffalo and Uvalde. But with 44 percent of Republicans in a recent poll agreeing that mass shootings should be accepted “as part of a free society,” another moment for action is slipping away. A child covered herself with her dead friend’s blood to survive, but Republicans have smeared America with their empty rhetoric and cowardice. And it’s killing us.