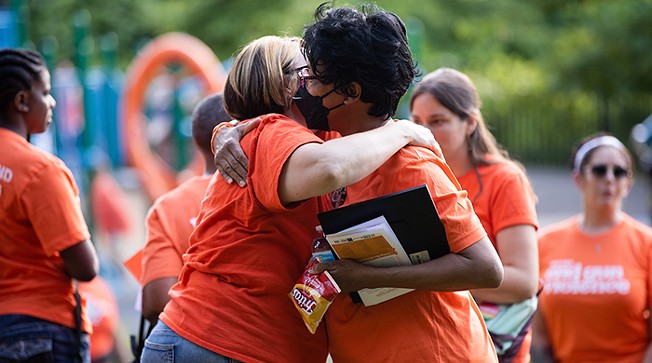 Jerame Turner was a 16-year-old student when he was shot dead in November 2017 just blocks from his home in Turtle Creek. His killer was a 13-year-old classmate.

Turner was the third Woodland Hills student to die that year from gun violence. His mother, Cathy Welsh, befriended the relatives of another victim when they came to Turner’s funeral in a show of solidarity, and began meeting with other gun trauma survivors to share support and marshal action.

Welsh says the Woodland Hills School District is home to more than 100 grieving families who have lost someone under 30 to gun violence.

“That’s just Woodland Hills,” she said during a June 3 National Gun Violence Awareness Day rally and community walk in the Hill District. “If you add all the violence-stricken communities in the Mon Valley, then you think about the city of Pittsburgh, it’s bigger than a mass shooting. We have hundreds of families going to bed and getting up without their children.”

Welsh says the work of local advocates has brought the violence down in Woodland Hills, which hasn’t witnessed a fatal shooting within the school community for nearly two years, and she believes their model could be replicable in other communities.

The crime scene near the mass shooting during a party along Suismon Street in the North Side on Sun., April 17, 2022

Against this glimmer of hope, the outlook on gun violence across the region remains bleak.

A year after Turner’s death, Pittsburgh became home to the deadliest anti-Semitic attack in U.S. history when a gunman opened fire inside Squirrel Hill’s Tree of Life synagogue, killing 11 people. Earlier this year, a teenage party-goer sprayed 90 bullets throughout an Airbnb-rented apartment in the North Side, killing two teens and wounding eight others. Just last week, a one-year-old baby became the latest of 49 Allegheny County homicide victims tallied since January.

On top of the deep layers of localized trauma, Pittsburghers have also been galvanized by a string of mass shootings that has recently rocked the nation.

One week after a school shooting in Texas claimed 19 young lives, protesters assembled outside U.S. Sen. Pat Toomey’s Pittsburgh office on May 31, calling on the Republican politician to commit to legislative action on gun control.

David Hogg, a survivor of the 2018 Stoneman Douglas High School shooting in Parkland, Fla., was among the featured speakers. Four years on, Hogg said he was “shaking from the trauma” while addressing the crowd in Pittsburgh.

Christian Johnson, a 16-year-old graduate of the Pittsburgh Public system, and Dominic DiNunzio, a current 10th-grade Pittsburgh Public Schools student, also shared their experience of gun violence and gave calls to action during the rally.

Hogg led the crowd through several choruses of “Senator Toomey, save our kids” before urging the protesters to see the politician as a potential ally in a fight engulfing all Americans. “He doesn’t want kids to get shot down, either, deep down,” Hogg said. “[W]e need Republicans and gun owners in this fight.”

Toomey has previously co-sponsored bi-partisan packages for moderate gun reform, with measures to increase background checks and red-flag laws, but even these modest gestures failed to clear Congress when put forward in 2013 and again in 2015.

Toomey is one of four Republicans currently sitting down with Senate Democrats to find an agreement on nonpartisan gun reform legislation. Bans on semi-automatic rifles are reportedly not part of the discussions.

Reached for a response to the protest leveled against him, a spokesperson for Toomey said his focus is to “keep guns out of the hands of known criminals and the dangerously mentally ill” without instigating further changes that would reduce gun access more broadly.

“It is possible to protect Second Amendment rights of law-abiding citizens while keeping guns out of the hands of dangerous individuals,” the spokesperson said. “The Senator remains committed to achieving this goal, and he is ready and willing to work with anyone on either side of the aisle to accomplish it.”

Toomey has publicly voiced opposition to banning assault rifles in the past, commenting once on Fox News that he wouldn’t support a ban because the weapons are “extremely popular.”

Pa. State Rep. Summer Lee, the Democratic nominee for U.S. Congress, was among the protesters outside Toomey’s office. She didn’t make a public address, but said during a later interview that the current legislative inertia calls for wider reforms to the political process.

“We already have legislation,” she told Pittsburgh City Paper. “We need to get it passed.”

To make headway on gun law and the other progressive causes she advocates for, Lee said she wants to see revisions to the electoral processes so that those in office may better reflect the nation’s voters.

“Our politicians don’t match and don’t reflect the will of our people,” Lee said, citing popular support for moderate gun reforms, which lawmakers remain unable to capitalize on. “Right now, special interests and super PACs are able to control our elected offices because of the outsized influence they have on our elections.”

In response to the 2018 Tree of Life massacre, Pittsburgh City Council, under former Mayor Bill Peduto’s administration, passed a package of bills banning assault rifles and large capacity magazines in city limits, and enabling courts to temporarily seize weapons from civilians deemed a public threat. In 2019, Peduto claimed he received a sharp increase in violent threats after signing in the new laws restricting gun use, and local gun activists backed by the NRA hit back with a lawsuit challenging the bills. Allegheny County Judge Joseph James ruled on those favorably, citing a prior state law vesting the power to enact gun legislation solely with the legislature.

Appellate courts have so far upheld James’ verdict, however Spotlight PA reports the Pittsburgh bills and two similar cases initiated by Philadelphia may receive a warmer hearing in the State Supreme Court.

While city officials wait for the courts to determine their authority over local gun controls, Peduto successor Mayor Ed Gainey, who was sworn into office in January 2022, is focusing on efforts to stem gunfire through a focus on violence prevention. He unveiled a new proposal on June 3, which he dubbed a “holistic approach” to violence prevention through a long-term commitment.

“It is time to address violence as a public health crisis that is treatable and preventable,” Gainey said during a press conference in Beltzhoover where he announced the plan.

The 10-page outline notes the failure of previous models based around “the three Ps — prosecution, policing and prisons,” and instead calls for a “public health model” focusing on trauma-informed support, community policing, and bolstering economic opportunities across the city.

The plan says the measures should focus on a group of around 200 people, which it claims are responsible for a majority of the gun violence in Pittsburgh.

Gainey emphasized the collective challenge posed by gun violence and called for all residents and advocates to pitch in with the effort. 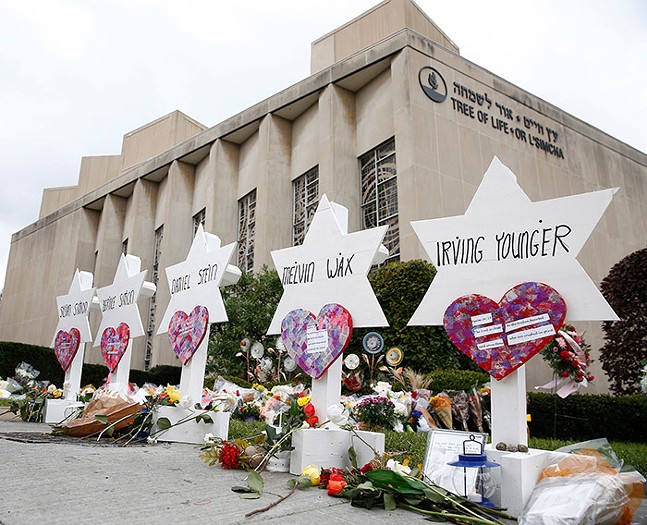 Star of David memorials with the names of the 11 people who were killed at Tree of Life Synagogue, shown outside the Squirrel Hill synagogue on Mon., Oct. 29, 2018

“We need partnerships not only at the local level but also the state and federal level,” Gainey said. “[W]e need a partnership with everyone if we’re gonna save lives.”

As politicians have wrangled over policy issues with little progress to show thus far, Lee Davis has devoted nearly 20 years to preventing gun violence on the ground here in Pittsburgh.

Davis, supervisor for the nonprofit Cure Violence Pittsburgh, has a grassroots approach that involves training mentors in their own communities who can use their positions of trust to mediate conflict and stave off potential violence. He believes local and national instances of gun violence could be drastically cut if the right resources were put toward supporting preventative measures. “You’ve got trauma on top of trauma,” he said. “The one thing that we need more of across the board is therapeutic support and mental health services.”

Davis says he’s experienced his fair share of trauma through his work in violence intervention. He has given eulogies, counseled bereaved mothers, and mentored vulnerable teenagers who have later become victims, like the two victims of the April mass shooting in a North Side Airbnb.

But he’s also seen teenagers put down their guns and teach their peers to do the same, and this gives him the hope he needs to press on.

“There are times in the car when I just break out crying,” he said. “[B]ut then you think about those kids who get better, or that family that you help — and you get back on the horse.”