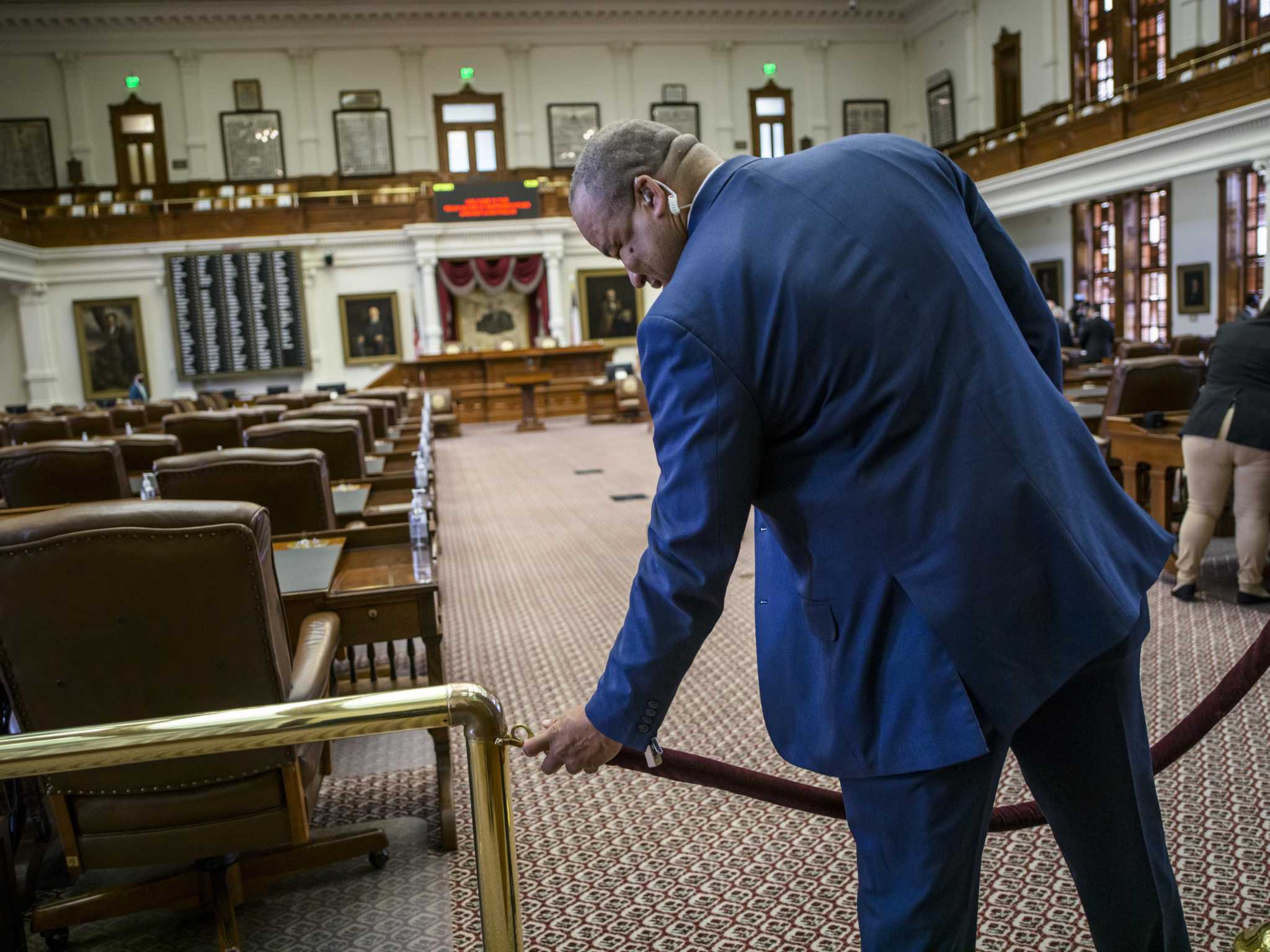 Texas lawmakers proposed about 200 bills addressing gun policy during the 2021 legislative session, including some that would have established universal background checks or raised the age to purchase an assault weapon — items long on gun control advocates’ wish lists.

Two years prior, after a pair of mass shootings in El Paso and Midland-Odessa, even some Republicans had expressed willingness to tighten gun laws. Both Gov. Greg Abbott and Lt. Gov. Dan Patrick bucked the National Rifle Association to support background checks on stranger-to-stranger gun sales.

But none of those restrictive bills got a vote, and only a handful had a hearing, during the 87th session.

By the time lawmakers convened in Austin, their urgency — and willingness to go against the gun lobby — had fizzled. Instead, the 2021 session was marked by the expansion of gun laws in Texas, including the passage of the permitless carry law that removed training requirements to carry a handgun in public.

A Hearst Newspapers analysis of 180 gun-related bills from the session revealed a deeply divided Legislature, where Republicans repeatedly shut down any efforts to curb firearm access. As Democrats pursued gun restrictions they have long believed would mitigate those massacres, Republicans sought to roll back existing laws that they viewed as an infringement of Second Amendment rights.

When lawmakers gaveled out in May, they had approved at least 22 bills related to firearms. The NRA called it a “groundbreaking session for gun owners,” and Abbott called the permitless carry bill “the strongest Second Amendment legislation in Texas history.”

“We saw an unprecedented movement during the 87th regular session to restore our rights and demonstrate that the Lone Star State is a leader in the fight to protect and preserve our firearm freedoms,” the NRA’s lobbying arm wrote in a blog post.

After the El Paso shooting, Abbott and other GOP lawmakers had promised to address gun safety during the next session, but “it just didn’t happen,” said state Rep. Lina Ortega, an El Paso Democrat.

“The environment, when the session started, was not favorable when it came to … common-sense gun reform or policies that would be acceptable to our Republican colleagues,” Ortega said. “And that was pretty obvious.”

Now, after last week’s shooting at an elementary school in Uvalde left 21 dead, Democrats are renewing calls for the measures that faltered during the 2021 session — and expecting a replay of the 2021 hearings and legislation. Abbott has so far declined to call a special session, instead directing the Legislature to form new committees to “reassess the twin issues of school safety and mass violence.”

During a Twitter argument on Wednesday, state Rep. Jeff Leach, R-Plano, said he would vote for permitless carry and the other gun measures again “in a heartbeat.”

Republicans have repeatedly said that gun control measures are not the solution to mass shootings, instead focusing on mental health resources and school security measures.

Gun rights for unauthorized immigrants, too

The 180 bills reviewed by Hearst Newspapers include measures that either fall under the “weapons” category in the Legislature or contain keywords like “gun” or “firearm.” Their authors were about evenly split by party, but Republican-led bills were twice as likely to get a hearing.

The 22 bills approved included permitless carry, which allowed most Texans age 21 and up to carry a handgun in public without a license; legislation allowing Texans to carry their handguns in cars and hotels; and a bill that intended to exempt Texas-made silencers from federal oversight.

Legislators also passed bills prohibiting the state from doing business with companies that “discriminate” against gun sellers and banning the governor from closing down gun sellers during an emergency, as was the case at the start of the COVID-19 pandemic.

“Once the permitless carry bill made it to the House floor, you’ve got Republicans who are backed by the NRA and those groups who were worried for their positions, that if they didn’t vote for this bill, they would lose the next election,” said state Rep. Vikki Goodwin, D-Austin. “So that had a great impact. This session was much more divisive than in 2019.”

“Despite the dangers of COVID-19, a deeply divisive political climate, and the clear intent of leadership to pass reckless gun laws, we continued our presence throughout the session as the lead on sensible gun policy in the state,” the organization wrote in its post-session analysis.

The House was, generally, a more friendly environment to Democrats who introduced gun control measures. While their bills never made it to the House floor, several were granted hearings — including one of Ortega’s proposals that would have codified Patrick’s request to expand background checks.

Patrick leads the Senate but never allowed such a hearing in the upper chamber.

“The private sale loophole is dangerous to Texans,” Ortega told the House Committee on Homeland Security and Public Safety in April 2021. “This impacts real people in our state every day.”

In the same hearing, state Rep. Matt Schaefer, R-Tyler, said that universal background checks would negatively impact Texas residents who are not citizens. Unauthorized immigrants would fail a national background check, he argued, and they too “are entitled to the God-given right to self-defense.”

“What I understand, and what people do not realize, is that you’re going to make it so that there’s only one door someone can walk through legally in the state of Texas to get a gun,” said Schaefer, who also authored the permitless carry bill. “And that’s through a door that is opened and closed in Washington, D.C., by people we’ve never met and have never voted for.”

Ortega’s measure, House Bill 118, never saw a vote in the committee. But in an interview this week, Ortega said she doubted it would have made a difference — it had taken “a long time” to get the hearing in the first place, and Republicans were likely to block the measure anyway.

Democrats had also hoped that year to work on a “red flag” law that would allow courts to temporarily remove firearms from individuals deemed a danger to themselves or others. Abbott had endorsed the idea after the Santa Fe shooting in 2018, but Patrick shut down the idea in the 2019 session.

Though lawmakers tried to revive the issue in 2021, none of their “red flag” bills were granted a hearing.

Instead, Republicans actively tried to prohibit such measures. State Sen. Drew Springer, R-Muenster, introduced a package of pro-Second Amendment bills in the early days of session, including legislation explicitly called the “Anti-Red Flag Act” that would have prevented localities from adopting such policies.

MORE LIKE THIS: Debunking the pants-on-fire claim that Uvalde massacre was a ‘false flag’ attack

“Standing up for the Second Amendment has always been one of my top priorities,” Springer said in a February 2021 release. “Time and time again, we’ve seen the federal government try to overregulate the firearms industry and overstep the Tenth Amendment which we know harms law abiding citizens. The bills I’ve filed today will protect Texans’ constitutionally guaranteed right to bear arms and defend themselves and their property.”

The anti-red flag bill, which had a companion in the House authored by GOP state Rep. Briscoe Cain of Deer Park, also never saw a hearing.

So far, Texas’ GOP leaders have shut down any proposals to restrict firearm access in the wake of the Uvalde massacre. Abbott and Phelan have instead focused on mental health resources, while Patrick has backed efforts to further secure school buildings.

After years of unfulfilled promises to regulate guns in the wake of mass shootings, state Rep. Rafael Anchía, a Dallas Democrat, said he’s “not hopeful” that things will be different this time around.

“After Sutherland Springs, no action. After Santa Fe, no action. After El Paso, no action,” he said. “Well, let me restate that. After all of those tragedies — and Odessa — the only action that we’ve seen is to loosen gun safety regulation.”