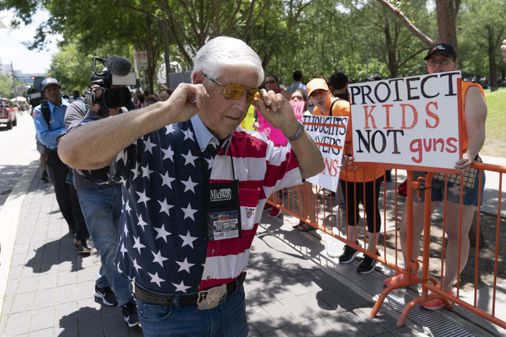 Even as a bipartisan group of US senators tries to fashion a legislative package to reduce gun carnage in America, some Republicans are offering up cynically dishonest alarmism.

To listen to them is to enter a rhetorical twilight zone where any move to strengthen gun laws is not just a first step toward eliminating gun ownership in America, but in some tellings toward ending American democracy itself.

The nation’s most prominent Republican struck that first dark chord in his Friday address to the National Rifle Association’s three-day meeting in Houston.

“We witnessed a now familiar parade of cynical politicians seeking to exploit the tears of sobbing families to increase their own power and take away our constitutional rights,” Donald Trump told the NRA faithful. “We all know they want total gun confiscation, know that this would be a first step. Once they get the first step, they’ll take the second step, the third, the fourth, and then you’ll have a whole different look at the Second Amendment, which is, by the way, totally under siege.”

Let’s call that what it is: utter rot. Not only is the Second Amendment not “totally under siege,” it has a court of conservative protectors and a 2007 Supreme Court decision declaring that Americans have a constitutional right to possess firearms.

However, in District of Columbia v. Heller, majority opinion writer and conservative icon Antonin Scalia also noted that that right is not absolute and suggested there is room for regulation, writing: “[N]othing in our opinion should be taken to cast doubt on longstanding prohibitions on the possession of firearms by felons and the mentally ill, or laws forbidding the carrying of firearms in sensitive places such as schools and government buildings, or laws imposing conditions and qualifications on the commercial sale of arms.”

Trump, of course, is hardly the only prominent Republican to have sounded that note. Pursuant to the apparent Republican belief that accusations of communism intensify any argument about anything, South Dakota Governor Kristi Noem told the NRA confab that the gun-safety push is “all about control” by Second Amendment enemies who “are schooled in the ways of Marx and Lenin.”

Ignoring Scalia’s non-absolutism in Heller — and the fact that no plans are yet on the table — Senator Ted Cruz, Republican of Texas accused Democrats of using the Uvalde school shooting to “try to restrict the constitutional rights of law-abiding citizens.” And not just that, but to “demonize” them as well.

Over time, few have been more irresponsibly alarmist than former House speaker Newt Gingrich, who purports to see threats to American democracy behind every tree. So wild-eyed is Gingrich that, in a 2010 book, he wrote that the Obama administration “represents as great a threat to America as Nazi Germany or the Soviet Union.”

Gingrich, who has also claimed that the left has an “international strategy to take away” Second Amendment rights, has issued warnings suggesting that without guns, American freedoms are endangered: “The right to bear arms is a political right designed to safeguard freedom so that no government can take away from you the rights that God has given you. . . . It is a political right of the deepest importance to the survival of freedom in America.”

This is all of a piece with NRA rhetoric. Although he has been relatively muted in the aftermath of last week’s massacre at Robb Elementary School, in 2018 NRA chief Wayne LaPierre warnedConservative Political Action Conference attendees that “a tidal wave of European-style socialists” had “seized control of the Democratic Party,” infesting it with “saboteurs” who don’t believe in the Constitution, capitalism, American freedoms, or even “America as we know it.”

“Absolute control in every corner of our government is their ultimate dream,” he charged, adding: “Their goal is to eliminate the Second Amendment and our firearms freedoms so they can eliminate all individual freedoms.”

All these, of course, are slippery-slope arguments, a form of fallacy that avoids the real matter at hand by offering evidence-free assertions of dire consequences that will later come of modest actions today. It’s not for nothing that assertions of that sort are considered a reasoning error.

Slippery-slope formulations are, of course, a staple of political discourse. They won’t stop. Not from Trump, not from Noem, not from Cruz, certainly not from LaPierre and the gun lobby or from the wild-eyed conspiratorialists so prevalent in the GOP’s populist base.

But as the country mourns the loss of 19 more schoolchildren and two teachers to gun violence, and as some senators endeavor, against the odds, to find ways to diminish this uniquely American affliction, voters must recognize and reject those arguments as the false alarmism they are.

Scot Lehigh is a Globe columnist. He can be reached at scot.lehigh@globe.com. Follow him on Twitter @GlobeScotLehigh.