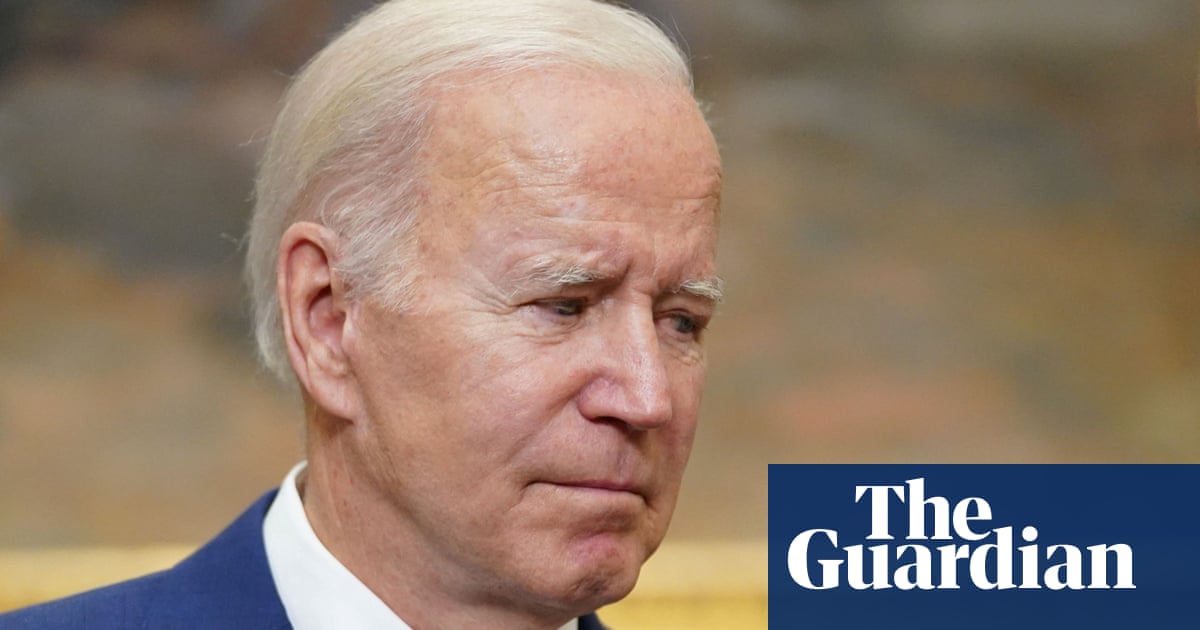 ‘We have to act’: can Biden cut through the gridlock on gun control?

Less than two hours after returning from a five-day trip to Asia, a visit meant to signal American strength, Joe Biden walked slowly into the Roosevelt Room of the White House, visibly shaken, to address one of the nation’s greatest weaknesses.

Another bloody mass shooting in America. This time in Uvalde, Texas, where an 18-year-old gunman killed 19 children and two teachers, making it the deadliest shooting at an elementary school since the massacre at Sandy Hook elementary school in Newtown, Connecticut, in 2012.

It was just 10 days after a gunman had targeted Black shoppers at a grocery store in Buffalo, New York, killing 10 people. And just nine days after a gunman opened fire in a Taiwanese church in southern California, leaving one dead and several wounded.

“Why?” Biden said, his voice rising in anger. “Why are we willing to live with this carnage? Why do we keep letting this happen?”

Nearly a decade after watching Republicans defeat a gun control package he helped develop as vice-president in response to the shooting at Sandy Hook, Biden’s wrenching search for answers to this uniquely American tragedy continues.

He entered the White House with a sweeping plan to address gun violence, but too-narrow margins in Congress to see them enacted. Once again, the president finds himself stuck between a desire to act and the limits of power to do so.

“I am sick and tired of it,” Biden said this week. “We have to act. And don’t tell me we can’t have an impact on this carnage.”

On Sunday, Biden will travel to Uvalde to honor the lives lost. He will grieve with the community as a father who knows the pain of burying a child. But as the president, it is unclear what he can deliver.

Biden said on Wednesday that “the idea that an 18-year-old can walk into a store and buy weapons of war, designed and marketed to kill, is, I think, just wrong,” declaring: “The second amendment is not absolute.”

Any hope he had of action from lawmakers on Capitol Hill was seemingly tempered by decades of false starts and failures. He called on Congress to pass “reasonable” gun safety laws and urged the Senate to take a “modest step” by confirming his nominee to lead the Bureau of Alcohol, Tobacco, Firearms and Explosives (ATF).

“We’re always looking to do more,” the White House press secretary, Karine Jean-Pierre, said on Thursday. “But right now we need the help of Congress.”

Encouraged by the White House, Democrats have thrown themselves into the gun control debate anew. A bipartisan group of lawmakers, led by the Connecticut senator Chris Murphy, who was the congressman representing Sandy Hook at the time of the massacre, began talks this week. But they face long odds in drafting a bill that can garner the 60 votes necessary to overcome a Senate filibuster.

Speaking at a gun safety rally on Capitol Hill on Thursday, Murphy acknowledged a feeling of “dejà vu” in the wake of these tragedies, when vows of “never again” are followed by gridlock and inaction. He asked supporters for help building the public case for action, urging a “popular uprising of citizens” to pressure Republicans.

Democrats say the discussions will not be open-ended and have vowed to force Republicans to take votes on the issue if no compromise is reached in the coming weeks.

“I’m not going to negotiate for ever,” Murphy told reporters after the rally.

Hours later, Senate Republicans blocked legislation introduced by Democrats that would have strengthened the federal government’s response to domestic terrorism and white supremacy in response to the racist attack in Buffalo, a stark reminder of the deep divisions between the parties on how to address gun violence in America.

The White House pointed to a flurry of executive orders Biden has signed as part of the administration’s “whole of government” response to the nation’s “epidemic of gun violence”. One would strengthen regulations on “ghost guns”, homemade firearms without serial numbers that are increasingly recovered at crime scenes. Another launched a team of strike forces to crack down on illegal firearms trafficking in New York, Chicago, Los Angeles, the Bay Area and DC.

Additionally, they have launched efforts to prevent veteran suicides by firearm, increase community policing and tighten regulations on “stabilizing braces” that have been used in mass shootings.

But the steps fall short of Biden’s campaign promises to ban assault weapons and high-capacity magazines and his embrace of a federal gun buyback program to take more weapons off the streets.

In the absence of congressional action, gun safety advocates believe Biden can do more with his bully pulpit and his pen.

“We need the president to bring this issue to the national level consistently, even when there aren’t mass shooting tragedies rocking the nation,” said Po Murray, chair of Newtown Action Alliance, formed after the Sandy Hook massacre. “He needs to make this issue a daily priority until we start reducing gun deaths and injuries in this country.”

Murray is among the advocates urging the White House to establish a federal office of gun violence prevention and issue a national emergency declaration to more forcefully confront the issue. Others have called on Biden to appoint a gun “tsar” or use his executive authority to expand background checks on firearm purchases and reform the ATF.

John Feinblatt, the president of Everytown for Gun Safety, said Biden had been the “strongest gun-sense president in history”. But he is urging the White House to issue an executive order that would clarify the definition of gun sellers so that more would be required to conduct background checks on prospective buyers.

During a press briefing this week, Jean-Pierre stressed that this had been a top priority for Biden for much of his political life. “Look, this is a president, as I’ve said already, who has been working on gun violence, comprehensive gun reform, since he was a senator.”

But a reporter pushed back: “Isn’t that more of an indictment” that he has been working on this issue for so long and so little has changed?

Jean-Pierre replied that Biden had done “more via executive actions than any president in their first year” to combat gun violence, but understands that
we need to do more.”

Biden’s frustration is borne of decades of experience working on the issue, one of the most divisive in American life. As a senator, he played a key role in passing the 1994 assault weapons ban, which expired in 2004 when Congress failed to renew it.

Years later, when Biden was vice-president, Barack Obama tasked him with the mission of developing a fresh wave of gun control measures in response to Sandy Hook. The team proposed a slew of executive actions that Obama ultimately signed, but a parallel legislative effort failed in the Senate in 2013.

Matt Bennett, a vice-president of the Democratic thinktank Third Way, who worked with Biden’s team on gun control legislation after Sandy Hook, said Biden knows his options are limited without Congress.

“When he ran the taskforce in 2013, they did their damnedest to find every single thing Obama could do by executive order, but there’s just not that much,” he said. “Trust me, they’re looking under every rock.”

Wading too deeply into the legislative debate as talks begin on Capitol Hill could upset the already-fragile negotiations, he added.

“Biden understands that this can’t be the ‘Biden bill’ or else it has no hope,” Bennett said.

In Uvalde, Biden will once again play the role of first responder to a nation reeling from tragedy. But in the days and weeks that follow, advocates hope the president will seize this moment to relentlessly pursue meaningful policy reform.

“He can be savvy but he cannot be complacent,” said Peter Ambler, executive director of Giffords, a gun violence protection group founded by the former Arizona congresswoman Gabrielle Giffords, who survived an assassination attempt that left six people dead, “because we cannot continue this cycle of mourning.”