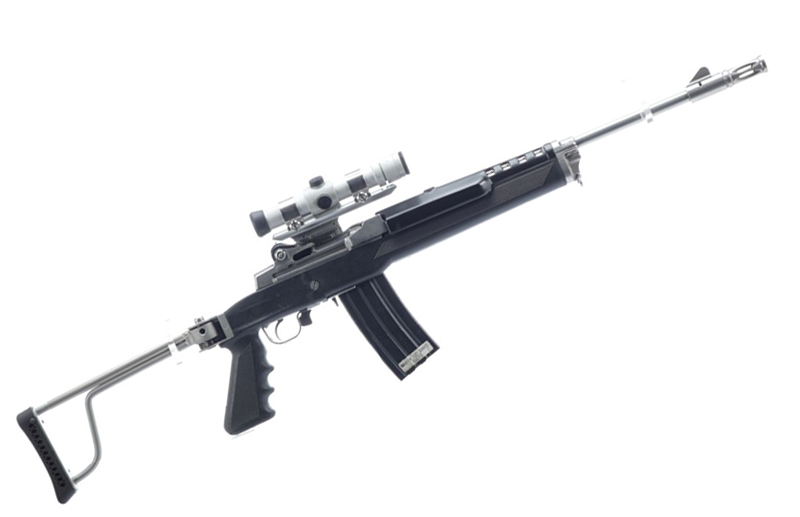 While not as modular as the AR-15, there are still plenty of Mini-14 accessory options available to trick out your ranch rifle.

Just like with aftermarket stocks, the amount of available Mini-14 accessory options are lacking. This is largely due to the fact that the rifle was only ever made by Ruger, unlike a design like the AR-15 that has been produced by a multitude of manufacturers.

The Mini-14 has struggled in this regard because it is a proprietary system that is not open source in any way. Ruger is the sole producer of the gun. As a result, many of the available Mini-14 accessories exist primarily to address the perceived shortcomings of the guns coming out of the Ruger factory.

Since the introduction of the Ranch Rifle model in 1982, Ruger has integrated scope bases into the receivers of their Mini-14 rifles, designed for use with the company’s proprietary scope rings.

There are several heights available from the factory, but you will want to try to get something that mounts low to the receiver.

The factory Mini-14 stock is set up for iron sights, and as such, it has a relatively low drop. Most shooters struggle to get a good cheek weld without the use of a riser of some kind to put their eye in line with the scope.

A common solution to this is a mil-spec rail adapter, installed in lieu of the special Ruger rings. Again, you will want to be aware of the height of your optic.

Another excellent solution is a scout-style rail that allows for the low mounting of extended eye relief scopes and red dots sights.

Considering that the Mini-14 is not an exceptionally accurate gun compared to many other rifles, a 2-MOA red dot, such as the Aimpoint T2 or an Eotech reflex sight, is just about ideal and allows for a rapid engagement at medium distance.

The UltiMAK Scout Mount (MSRP $142) is one of the original and best options for this task.

This rugged mount is great for holding zero and is made of one solid piece, thus giving it superior resistance to heat buildup and flex.

This is an integrated type of mount and requires more disassembly than usual to install. The mount itself clamps around the barrel and also integrates itself into the gas block.

The benefit of this mount is that it does not interfere with the stock itself, so you will still be able to use most aftermarket stocks of your choice except for a chassis type that completely encapsulates the gun.

In addition to a micro red dot mount that interfaces over the receiver in the Ruger ring slots, they also make a side-scope mount that allows for larger objectives to be used. If you are hunting with your Mini-14 and want to mount a thermal optic, this is a great option.

Notably, the red dot mount from GG&G is available with a Burris Fastfire optic already installed, meaning all you have to do is attach it and zero it up.

This is a quick and relatively affordable Mini-14 optic solution with a price of $287.95, but the mount can also be purchased independently for $51.45.

One of the primary causes of poor accuracy in the Mini-14 stems from the vibration created by its gas system and heat buildup causing barrel flex.

Many old Mini-14 rifles are sometimes embarrassingly inaccurate, producing groups as large as 5 or 6 inches at 100 yards.

Though attempts have been made over the last 50 years to make the rifle shoot better, the most consistent product to accomplish this has been the Accu-strut (MSRP $120).

This product interfaces with the barrel and gas system, and while it looks a bit military it is really a dampener that helps to harmonically stabilize the barrel during firing.

Newer Mini-14 rifles are much more accurate than the old ones, but there are still individuals who opt to install the Accu-strut regardless of the rifle’s production year.

The company advertises a 75-percent reduction in group size in older guns, and this has been proven to be true across the board. The Accu-strut is probably the most common and widely known Mini-14 accessory.

The Mini-14 uses proprietary magazines that rock in like those of full-size M14/M1A or AK rifles.

Factory magazines are constructed of heavy-gauge steel rather than aluminum and are known for being very durable and reliable.

Another thing they are known for unfortunately is their cost. The average price for a Ruger-made magazine is around $40.

Compare this to the average AR-15 magazine which can be had for as little as $10.

There are indeed companies that make polymer magazines for the Mini-14, though they are not well known for being as reliable as Ruger-brand mags. Polymer magazines from companies like ProMag run about $20 today, with their steel version being closer to $30.

This is still relatively expensive and considering the factory Ruger versions are known to be exceedingly reliable, one has to consider if it wouldn’t be better to just stick with OEM mags.

Thermold also makes 30-round polymer Mini-14 magazines that are quite affordable at around $15 each.

Though, first-hand experience has not proven them to be as rugged as one would like.

The main struggle with most polymer magazines is how they interface with the magazine release, which is a paddle type. The exterior geometry of some of these causes binding and makes the magazines difficult to remove.

This item allows for the fine-tuning of the Mini-14 and the fifth-generation model can be used in tandem with other Accuracy Systems products such as the Accu-strut.

This combination of an adjustable gas block with accuracy-enhancing features makes it so that the Mini-14 will be at its best and offer increased reliability with a wider variety of ammunition types.

What’s more, the Accuracy Systems gas block also works with other systems integrated into the gas block such as the UltiMAK scout rail.

This gas block assembly, when combined with a Scout Rail and Accu-strut, makes for the most flexible aftermarket setup of available Mini-14 accessories.

More On The Mini-14 And Other Ruger Rifles: