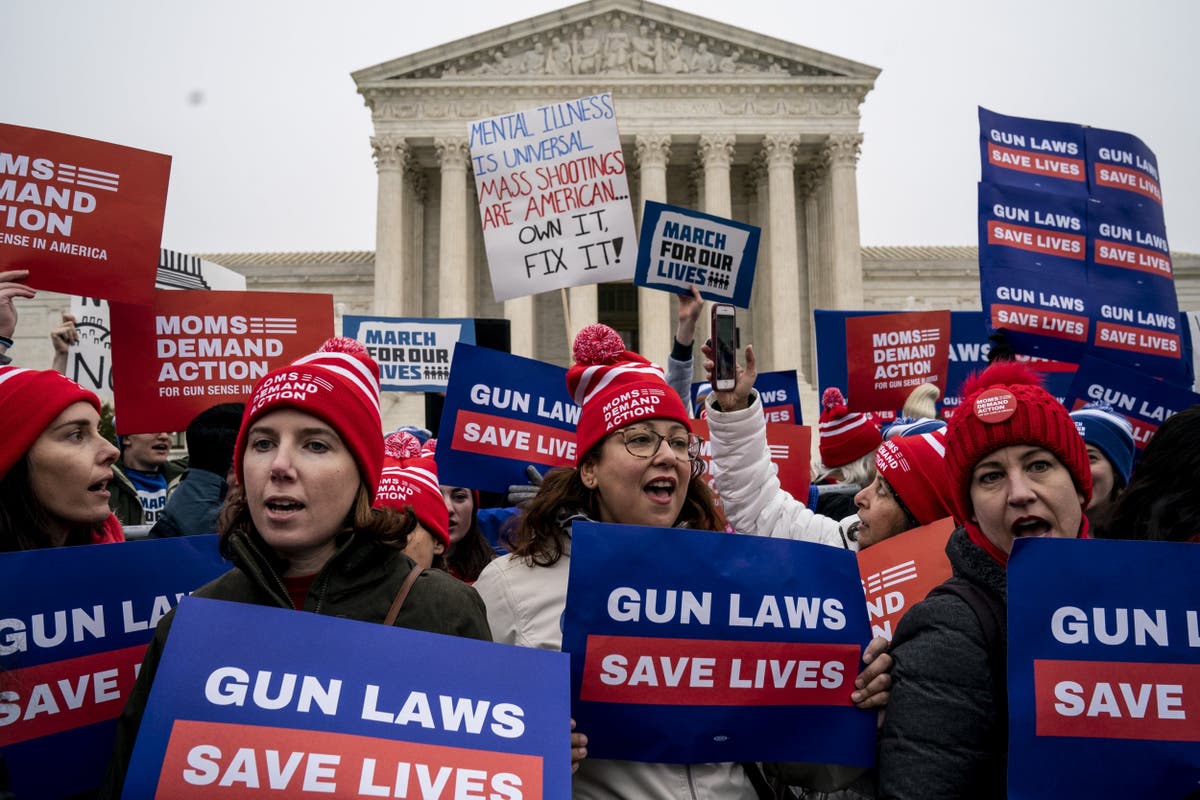 In the wake of a mass shooting at a grocery store in Buffalo that left 10 people dead earlier this month and a massacre at an elementary school in Texas that killed 19 children and two teachers one week later, the US Supreme Court is weighing a case that could see Americans’ right to carry a gun in public expanded.

In November, justices from the newly cemented conservative bench heard oral arguments in New York State Rifle & Pistol Association v Bruen, a case that challenges the state’s 108-year-old law that requires people to demonstrate “proper cause” if they want to apply for a permit to carry a gun in public.

This is the first time in over a decade that the highest court has heard a Second Amendment case. It also arrives at a time when the bench is tilted in a 6-3 conservative majority and while the country is experiencing a major gun-buying boom and surging gun violence.

In New York, the rules around open carry laws stipulate that you must first apply for a licence if you’d like to bring your firearm outside of your private residence. To grant that permit, the state asks that you are at least 21 years of age, you are of “good moral character”, you have no criminal record and that you are able to demonstrate a “proper cause” for why you need to carry the weapon.

This last condition, the point at the centre of the Supreme Court challenge, states that your concerns must go above the average public safety fears. For the two upstate New York men challenging the law, supported by the National Rifle Association, they argue that this “proper cause” stipulation infringes on their Second Amendment right.

The men then sued the state after their applications to carry anywhere in public were denied and they were only permitted to bring their guns outside the home for hunting and going to and from work.

The decision was upheld by the lower courts and then snaked its way up to the Supreme Court, which heard oral arguments for the case in November. During the proceedings, consevative justices seemed tilted towards siding in favour of the men’s challenge and ruling that the law was unconstitutional.

Justice Samuel Alito questioned the portion of New York’s requirement that stipulates that individuals must show a “non-speculative” need to defend themselves. The justice pointed out how this condition would prevent a large portion of Manhattan’s workforce, namely doormen, food and service employees and hospital workers, who might be working in safe areas but have to travel back home to “a high-crime area” at unsafe hours of the night, from getting a concealed-carry licence.

“[How] is that consistent with the core right to self-defence, which is protected by the Second Amendment?” Justice Alito asked.

Justice Brett Kavanaugh, appointed by former President Donald Trump, similarly took up this point and asked: “Why isn’t it good enough to say, ‘I live in a violent area, and I want to be able to defend myself?’”

Should the Supreme Court decide to rule that New York’s “proper cause” condition is unconstitutional, there could be wide sweeping implications across the country.

There are currently seven other states that have similar concealed carry licensing laws in place, including California, New Jersey, Hawaii, Rhode Island, Massachusetts, Maryland and Delaware. Should the court rule that New York’s law is in violation of the Second Amendment, then those seven other states with similar open carry laws would likely also see their rules knocked down.

The Giffords Law Center, an organisation that advocates for stronger gun-control legislation, warned in September 2021 that should the justices take a wide approach in their ruling and Second Amendment rights are expanded beyond their historical limitations, “they risk colliding directly with core First Amendment protections”.

“If more people are allowed to carry guns in more public places without establishing proper cause for doing so, it will become much more dangerous to speak, assemble, pray, or express controversial ideas in public settings, and thus necessarily chill the exercise of these rights,” the group wrote.

“The impact of an expansion of the right to self-defence in public, like the one advocated by the challengers, would have a disproportionate, negative impact on communities of colour, who are already suffering unacceptable rates of gun violence.”

There is, however, the possibility that the court would take a narrow approach in their ruling, which is expected to be handed down in either June or July. For instance, during oral arguments last fall, the justices, both conservative and liberal, seemed concerned with how the open carry law would operate in a place like New York City, specifically in “sensitive places” like Times Square, school campuses and public parks.

The court could potentially rule that the New York state law is unconstitutional in this specific instance, but decide not to make a sweeping ruling that would then trigger states with similar concealed-carry legislation to have their own laws knocked down, too.