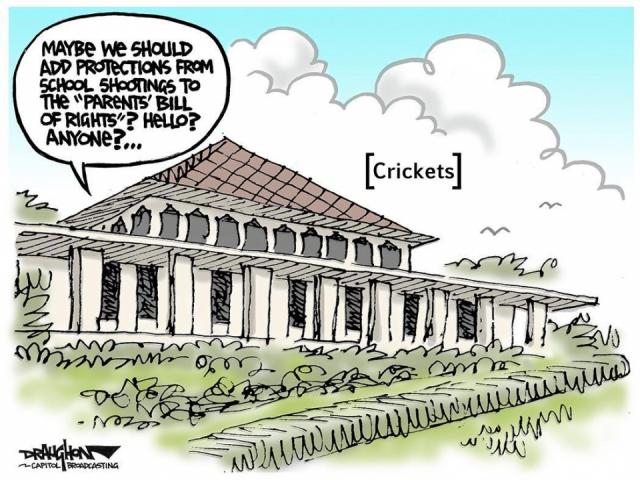 CBC Editorial: Thursday, May 26, 2022; Editorial #8763
The following is the opinion of Capitol Broadcasting Company

There are places in the world where just going to school is a life and death matter.

The United States should not be one of those places. But — as we witnessed again on Tuesday in Uvalde, Texas – for 19 fourth graders and two of their teachers at Robb Elementary School, it is.

They were where they were supposed to be and where they assumed was as safe as any place on the planet.

They are dead because a person, protecting himself with body armor and ladened with weapons of mass destruction and ammunition he’d purchased just days earlier, entered a classroom and in just a few minutes blasted away at as many as he could.

They are dead because some politicians are more fearful of campaign retribution from the well-financed gun lobby than they’re concerned about the safety of their constituents.

This is not about the 2nd Amendment. This is about responsibility. Assault weapons more appropriate for war zones than suburban neighborhoods. Does every front yard need a Howitzer beside the lawn gnome?

Should a military-style assault weapon be as easy to buy as an RC cola and a pack of Nabs?

No. Most voters support banning assault-style weapons – including most Republicans.

North Carolina’s Senators Richard Burr and Thom Tillis must be in the forefront to immediately re-enact the Assault Weapons Ban passed 1994.

North Carolina Gov. Roy Cooper is calling for it. It was passed when now President Joe Biden was the chairman of the Senate Judiciary Committee and expired in 2004. “The body of research now increasingly suggests the 1994 law was effective in reducing mass-shooting deaths,” according to March 2021 fact-check.

When North Carolina Lt. Gov. Mark Robinson speaks to the National Rifle Association later this week in Texas he should echo Cooper’s plea. Robinson needs to stand up for the safety of the school children and citizens he represents, not the political clout of the NRA – where he serves as a national board member.

Cooper is rightly calling on the legislature to close loopholes on the state’s gun permit laws that make it easier to purchase assault weapons. Further he wants the enactment of a “red flag law” so judges can take guns from violent criminals and the severely mentally ill.

The General Assembly needs to pass that legislation now.

Why is it such a struggle to pass common-sense laws that would require criminal checks on those who purchase firearms at gun shows and through the internet? Why is it such an onerous slog to pass legislation to lengthen the waiting period for gun-buyers who are flagged by instant background checks so law enforcement can do further investigation?

Two pieces of legislation – passed by the House of Representatives – are sitting in the Senate and deserve passage. They’ll in no way inhibit any law-abiding citizen from buying a firearm – but will help keep them out of the hands of those who might abuse them.

The Enhanced Background Checks Act of 2021 (H.R. 1446) will lengthen the waiting period for the “instant” background checks. Had this law been in place, it would have been likely that gunman Dylann Roof would have failed a background screening because of a previous arrest for drug possession when he purchased the weapon used in the 2015 deadly shooting at a historic Black church in Charleston, S.C. The bill passed the House on a 219-210 vote in March 2021.

The Bipartisan Background Checks Act of 2021 (H.R. 8) will expand background checks for all gun sales and transfers. Now licensed gun dealers are required to check potential buyers through an FBI database — the National Instant Criminal Background Check System (NICS) — to identify felons, illegal immigrants, spousal abusers, the severely mentally ill or other categories that prevent them from buying or owning firearms. But currently unlicensed gun sellers — often those at gun shows or on the internet — are not required to do the screenings – leaving a loophole that poses a severe threat to public safety. Also in March 2021, that bill passed the House on a 227-203 vote. Eight Republicans joined the Democrats who voted for the bill.

That echoed Gallup findings in 2018, where 92% of the nation favored required background checks for all gun sales.

These are common-sense steps. They will not keep any kind of gun away from law-abiding citizens. But they but will help keep them out of the hands of criminals and otherwise unstable individuals.

While no guarantee, they’ll help prevent the next Columbine, Sandy Hook, Stoneman Douglas or Robb Elementary and not sacrifice anyone’s 2nd Amendment rights.

Capitol Broadcasting Company’s Opinion Section seeks a broad range of comments and letters to the editor. Our Comments beside each opinion column offer the opportunity to engage in a dialogue about this article.

In addition, we invite you to write a letter to the editor about this or any other opinion articles. Here are some tips on submissions >> SUBMIT A LETTER TO THE EDITOR

Georgia: State Senator Jason Anavitarte Receives NRA-ILA Defender of Freedom Award
BioLite FirePit Review & Grilling Food
Here are the 15 Republicans who voted to end a filibuster on gun safety legislation
‘Black gun’ culture is wrong. It’s time for responsible gun owners to call it out
The ‘Do Something’ Gun Control Bill Does Little But Erode Rights