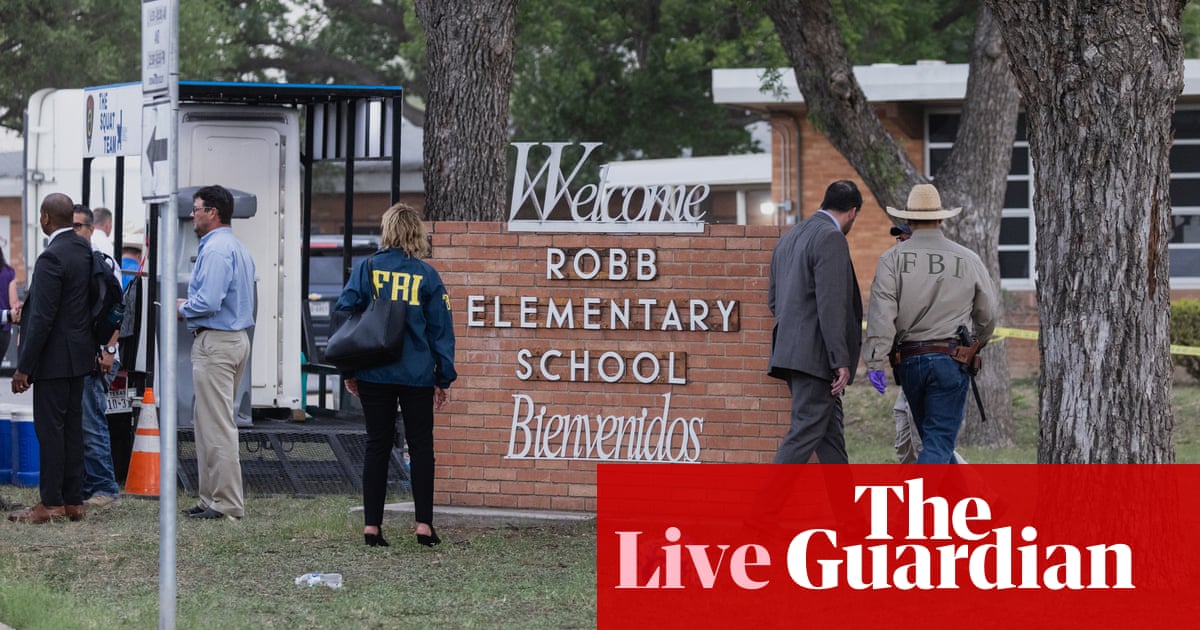 The president has delivered remarks at the White House on today’s mass shooting. Footage of the talk can be found here.

“I had hoped when I became president I would not have to do this, again. Another massacre,” he began in an emotional speech.

Biden drew on his own experience with grief, having lost his first wife and young daughter in a car accident in 1972 and an adult son to cancer in 2015.

“To lose a child is like having a piece of your soul ripped away,” he said. “There’s a hollowness in your chest you feel like you’re being sucked into it … you’re never quite the same”

The president took a harsher tone when speaking about the need for “common sense” gun legislation. He spoke of the shooting in Buffalo ten days ago, and lamented that in both incidents an 18-year-old was able to purchase a gun and commit such heinous crimes.

“When in God’s name are we going to stand up to the gun lobby?” he said. “Why are we willing to live with this carnage? Why do we keep letting this happen?”

“It is time to turn this pain to the action,” he said. “For every parent, every citizen of this country. We have to make it clear to every elected official in this country: it’s time to act. It’s time for those who obstruct or delay or blocked the common sense gun laws – we need to let you know that we will not forget.”

Biden’s speech came shortly after he returned to the White House from a multi-day trip to Asia.

Nineteen students and two adults were killed in a Texas elementary school shooting on Tuesday.

Here’s everything we know so far:

That’s it from me, Samantha Lock, as I hand you over to my colleague.

By nightfall in the Texas town of Uvalde, the names of the first student victims had began to emerge.

Eight-year-old Uziyah Garcia was identified by his family as one of the children killed in the school shooting attack.

“The sweetest little boy that I’ve ever known,” Garcia’s grandfather, Manny Renfro, told the Associated Press. “I’m not just saying that because he was my grandkid.”

“We started throwing the football together and I was teaching him pass patterns. Such a fast little boy and he could catch a ball so good. There were certain plays that I would call that he would remember and he would do it exactly like we practiced.”

“He was just a loving 10-year-old little boy, just enjoying life, not knowing that this tragedy was going to happen today,” she said. “He was very bubbly, loved to dance with his brothers, his mom. This has just taken a toll on all of us.”

Lopez’s cousin earlier told KSAT the local ABC news affiliate, that his mother was with him at the school during an awards ceremony just hours before the shooting, not realising it would be the last time she would see him.

Amerie Jo Garza, also 10, was identified by family as one of the children killed.

Her father, Angel Garza, told ABC News the little girl had just turned 10 on 10 May.

“Thank you everyone for the prayers and help trying to find my baby,” Angel Garza wrote to ABC in a statement. “She’s been found. My little love is now flying high with the angels above. Please don’t take a second for granted. Hug your family. Tell them you love them. I love you Amerie Jo. Watch over your baby brother for me.”

Horrified by the news of a fatal shooting at a Texan primary school. My thoughts are with the people of Texas and all those affected by this dreadful attack,” Truss tweeted early Wednesday morning.

Democrat Roland Gutierrez said he was told in a briefing by Texas Rangers that Salvador Ramos bought two assault-style rifles from a store in Uvalde County on his birthday.

That was the first thing he did on his 18th birthday,” he said.

Investigators believe Ramos posted photos on Instagram of two guns he used in the shooting, and they were examining whether he made statements online alluding to the attack in the hours before the assault, a law enforcement official said.

New Zealand’s prime minister Jacinda Ardern says her country’s swift change to gun laws following its 2019 mass shooting was a “pragmatic” response, where “we saw something that wasn’t right and we acted on it”.

The prime minister was speaking as her visit to the US coincided with the mass killing of children in Texas.

Ardern appeared on the Stephen Colbert late show, which was filmed shortly after the Uvalde shooting. “When I watch from afar and see events such as this today, it’s not as a politician. I see them just as a mother,” an emotional Ardern said. “I’m so sorry for what has happened here.”

Colbert referred to the wake of the 15 March mosque shootings, where 51 were killed by a white supremacist, saying, “Immediately thereafter the New Zealand parliament took action to remove guns from the streets.” He asked “why New Zealand was able to do that, when we can’t so much as pass universal background checks… how did New Zealanders get that done?”

“We saw something that wasn’t right and we acted on it, and I can only speak to that experience.”

When we saw something like that happen, everyone said never again, and so it was incumbent on us as politicians to respond to that,” she said. “Now, we have legitimate needs for guns in our country, for things like pest control and to protect our biodiversity – but you don’t need a military-style semi-automatic to do that.”

In the wake of the 2019 shooting, New Zealand banned almost all semi-automatic weapons and assault rifles. The law change was passed near-unanimously, with a single dissenting vote. Speaking at the time, Ardern said: “I could not fathom how weapons that could cause such destruction and large-scale death could have been obtained legally in this country.”

Ardern told Colbert New Zealand’s current gun control situation was imperfect, and there was still work to be done.

Hillcrest Memorial funeral home, which is located across the street from Robb elementary school, has said it will be assisting families for funerals of the shooting victims at no cost.

“Hillcrest will be assisting families with NO COST for funerals for all involved in today’s horrific events. Prayer for our small amazing town,” the company said in a Facebook post on Tuesday evening.

Pop singer Taylor Swift has spoken out, describing her “rage and grief” following the attack.

A nightmarish scene is continuing to play out for many parents who are still waiting outside the family reunification center in Uvalde to receive the news that their children are dead.

Many have been waiting for hours.

According to New York Times reporter, Jazmine Ulloa, parents say they have had to go inside the center for DNA swabs to confirm their relationship to their children and were then told to wait for results.

One mother who just received the news that her child was dead said she had been waiting since the early afternoon, according to the publication.

Parents have been clustered around their cars “quietly talking or weeping on a hot, muggy night”, Ulloa said adding that audible sobs continue to ring out across the parking lot as cars slowly clear out.

As more details continue to pour in, here is a video report compiled by some of our reporters detailing some of the facts we know so far.

Erica Leslie Lafferty, whose mother was killed in the massacre in Connecticut in 2012, said that it was “beyond time to take action” in the wake of the attack in Uvalde which has left at least 19 children and two adults dead.

“Thoughts and prayers didn’t bring my mother back after she was gunned down in a hallway at Sandy Hook, she said on Twitter. It is beyond time to take action.”

She said she had struggled with PTSD after the massacre. “My heart is with #RobbElementarySchool families, faculty and the community. I’m broken.”

Speaking later on CNN, Lafferty said: “These families in that community are walking into hell and there is definitely a network of people out there who have lived it, who are stepping up to support them … But it’s not going to just go away. Not for the families, not for the community. It’s life-changing. It’s devastating. It’s traumatizing, and every single time it happens, it brings it back like it was yesterday.”

Neil Heslin, whose son Jesse Lewis, 6, died in the shooting in 2012, told the New York Times that he felt defeated. “I guess it’s something in society we know will happen again, over and over.”

Watching the coverage was “almost like an instant replay of Sandy Hook,” he said.

Read our full report below.