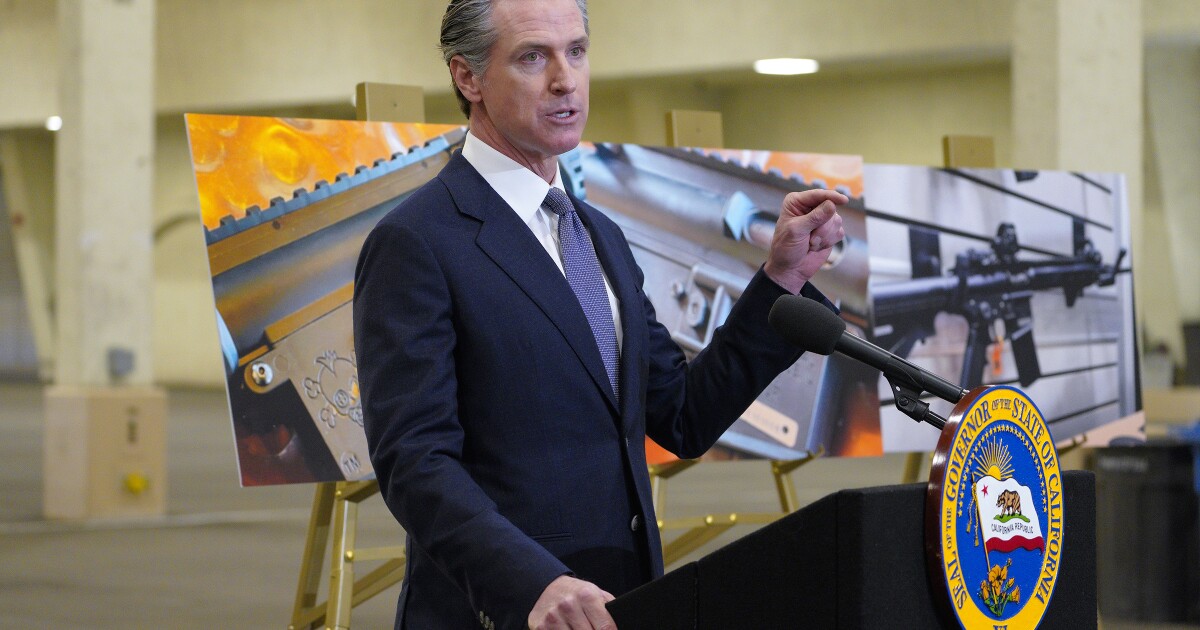 Gov. Gavin Newsom called out Republicans Tuesday for inaction on the issue of gun control, saying the party “won’t do a damn thing” in a series of tweets hours after a shooting at a Texas elementary school that left 18 children and one teacher dead.

“Who the hell are we if we cannot keep our kids safe,” Newsom wrote. “This is preventable. Our inaction is a choice. We need nationwide, comprehensive, commonsense gun safety now.”

The Democratic governor also reposted a tweet from the National Rifle Association that promoted former President Trump yesterday as a featured speaker at its conference in Houston on Friday, marking his sixth time speaking at the annual gathering.

Newsom’s dispatches, which were quickly retweeted thousands of times, were among a sea of calls on the social media platform for stronger gun control legislation in the U.S. in the wake of the deadly shooting in Uvalde, Texas, a small town about 85 miles outside of San Antonio.

“Commonsense gun safety laws work,” Newsom tweeted. “In CA, we have cut our gun death rate in half since the 1980’s. We won’t solve this overnight — but let’s stop pretending that these mass shootings are an inevitable horror we have to experience on a regular basis.”

The governor has repeatedly touted efforts in California to thwart gun violence as a national example for others to follow.

Along with Florida, Texas has become a go-to political target for Newsom when he criticizes Republican-dominated states for glorifying guns, restricting abortion rights, enacting policies that target transgender students and resisting public health measures to stem the spread of COVID-19.

Amid Newsom’s campaign for reelection, Republicans have attacked the Democratic governor for the state’s increase in crime. But Newsom has insisted that the “deep red state” of Texas has higher property and violent crime rates than California.

In December, Newsom called on state legislators to craft a bill enabling Californians to sue gun manufacturers and distributors — a measure patterned after a Texas law upheld by the U.S. Supreme Court that authorizes private lawsuits in Texas courts against anyone who violates the state’s strict restrictions on abortions. One such proposal, Senate Bill 1327, was approved Tuesday by the state Senate just after the first reports of the mass shooting in Texas.

“If Texas can use a law to ban a woman’s right to choose and to put her health at risk we will use that same law to save lives and improve the health and safety of the people in the state of California,” Newsom said at the time.

Several other bills are moving through the California Legislature that would further tighten gun restrictions. Legislation that would limit firearm advertising to minors passed the Assembly on Monday.

But not all of California’s efforts have won praise. Earlier this month, a federal appeals court ruled that the state’s ban on the sale of semiautomatic rifles to adults under age 21 was unconstitutional.

California has also experienced its share of mass shootings. On May 15, a gunman attacked a lunch banquet at a Taiwanese church in Laguna Woods, killing one person and wounding five others.

Last month, a deadly shooting in Sacramento brought the issue of gun control closer to home for Newsom after six were killed and a dozen injured just blocks from the state’s Capitol.

“The scourge of gun violence continues to be a crisis in our country, and we must resolve to bring an end to this carnage,” Newsom said on April 3 following the Sacramento shooting.