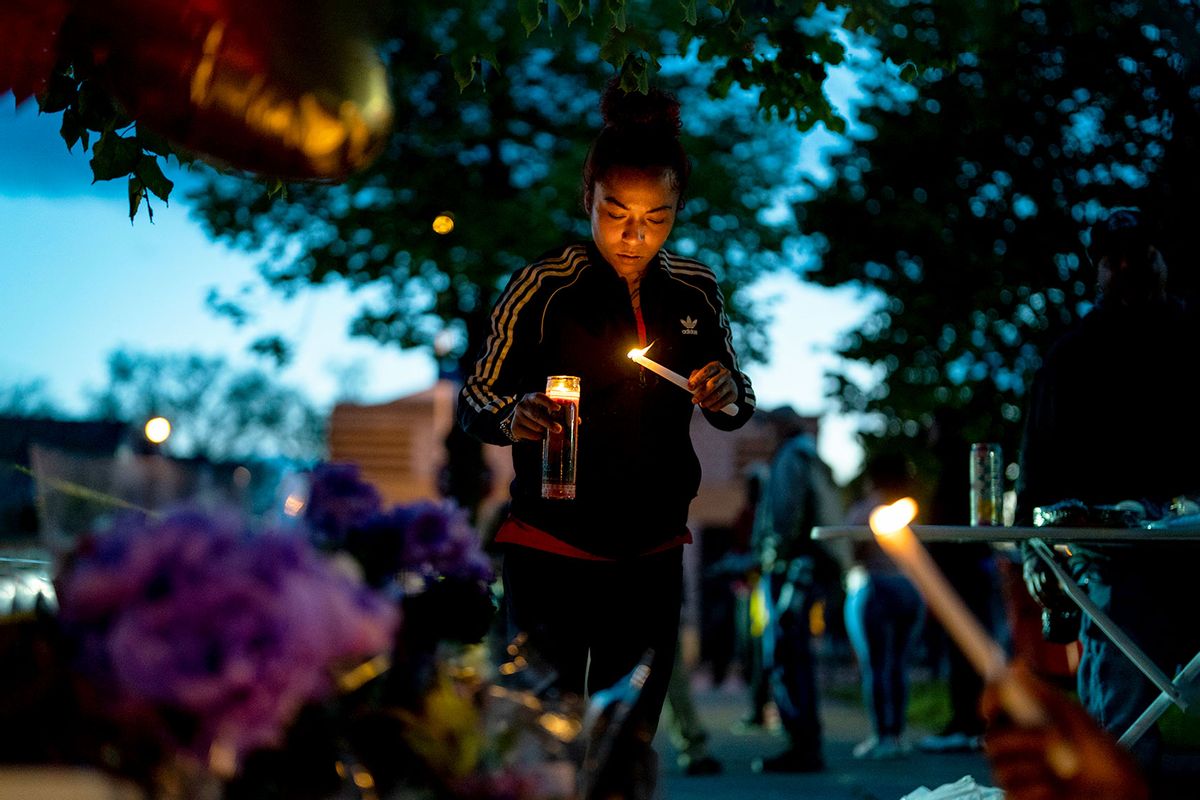 If I ever had a chance to address Congress, I’d walk right onto the main floor of the Capitol Building, preferably during a joint session, and ask who must get shot in America before we do something about gun control? Really, who?

Tens of thousands of people die from gun-related injuries in America every year. The number was 45,222 in 2020, according to the Pew Research Center. How can policymakers say they love America when they continue to allow this to happen? These jokers on the local level who are quick to ban books wouldn’t dream of working to ban assault weapons.

RELATED: For too many Americans, guns are tied to masculinity, patriotism and white power

I follow a terrible Instagram account: @murder_ink_bmore. The theme of the account is perfectly captured by its username­­: It’s a feed full of posts about murders, RIP remembrances, and occasionally people advertising their real estate companies or homemade haircare products. Every week I think about unfollowing it, but it’s almost the fastest way to keep tabs on the death toll in my city.

Sometimes I recognize the victims; they’re people I grew up with, people I knew personally, people I taught in their high schools and colleges.

Baltimore has been surpassing 300 murders per year, mostly young Black males, though the number of young Black women is rising every year. Sometimes I recognize the victims; they’re people I grew up with, people I knew personally, people I taught in their high schools and colleges. Sometimes they’re people I’ve seen buying my books, posting about my work and readings and events. Murder_ink_bmore is probably the most depressing account in the history of social media. But I’m not alone in following them; 150,000 people keep tabs on the account, just like me.

Last weekend, the account posted a photo of a clean-cut young man, sharply dressed in a suit and bow tie. At first glance, I thought this was a positive post for a change — maybe a local company advertising formal apparel — until I caught the caption: “Teen fatally shot after prom may have been robbed for his watch and sneakers.”

RELATED: Why did gun violence go up during the pandemic?

The victim was a 17-year-old boxer named Jasmine Brunson Jr. His family said he had just attended his junior Prom and was at an after-party when gunshots rang, taking away his young life.

The post had a second slide, so I swiped to see Brunson’s family celebrating him on his way to the dance, posing and taking pictures on the front porch under a two-toned balloon arch. That video made my heart sink. Not in a new way. It’s the same way I feel every time I learn of a person losing their life to a senseless act of violence. I hurt for the victim, I hurt for the perpetrator, and mostly I hurt for the family, as I know they will have to relive that night over and over again for the rest of their lives.

“He was a light. He has lots of hopes and dreams for himself,” the family said in a statement. ”He was a believer. He had a younger sister, and he was an awesome big brother. He was an awesome, well-rounded kid.”

I texted a friend the link to the post. He replied “SMH, I hate this f***in town,” before sending me another post from Thursday about a 38-year-old woman gunned down in east Baltimore. She was seven months pregnant. Her name was Angel Morgan Heather Smith. The doctors were able to deliver the baby; however, the child remains in critical condition.

I couldn’t process Brunson’s or Smith’s killings. We shouldn’t have to. It’s not normal. Even if I had tried to make sense of it, I didn’t have time, because the news of the Buffalo massacre instantly followed.

The suspect — Payton S. Gendron, 18, of Conklin, New York — is in custody and has been indicted in connection with this mass shooting. The authorities say he drove several hours from his home to a Tops Friendly supermarket in Buffalo, where he allegedly shot and killed 10 people and injured three. He has pleaded not guilty to first-degree murder charges. The shooting is also being investigated for possible federal hate crime charges.

A lengthy manifesto said to have been posted online by Gendron declares Buffalo the target site because of its Black population, echoes “Great Replacement” antisemitic and white supremacist views, and makes apparent a goal was to kill as many Black people as possible. Many of the victims were elderly.

A retired police officer working as a security guard at the store, whom authorities say tried to stop the shooting, was among those killed. I can’t help but wonder if whoever is responsible for the NRA’s social media would have felt comfortable sending off that tweet if one of their family members had been shot and killed while they were out trying to buy groceries.

The scariest part of that bloody weekend is our collective numbness.

On the same day as the Buffalo shooting, on the other side of the country, a gunman opened fire on a Taiwanese church gathering, killing one and wounding five.

The scariest part of that bloody weekend is our collective numbness. The families will suffer, but for the rest of us, our daily responsibilities — and our need to avoid confronting the crisis we are in — force us to keep pushing on as if this is all normal. We have deadlines. We have a workweek to get ready for. And then there’s the NBA finals, the new “Dr. Strange” movie and “Honey, you want takeout?” All of this pushes us back out of the reality that these headlines remind us of: We live in a country where people kill people just because they can, and the tools needed to do so are often readily available and, for the most part, easy to obtain. It keeps happening, over and over, and we just keep on keeping on — not because we don’t care, but because enough people in power don’t.

What does the perfect victim look like, whose death could wake America up to its gun violence crisis and force us to find a solution? We know it’s not Black teens at a Prom afterparty or Black grocery shoppers. We know it’s not elementary school children, college students or country music lovers. We know it’s not church or synagogue members, Walmart shoppers, subway commuters or “Batman” fans. It’s not even politicians. So who is it? Who has to get shot in America before we do something?