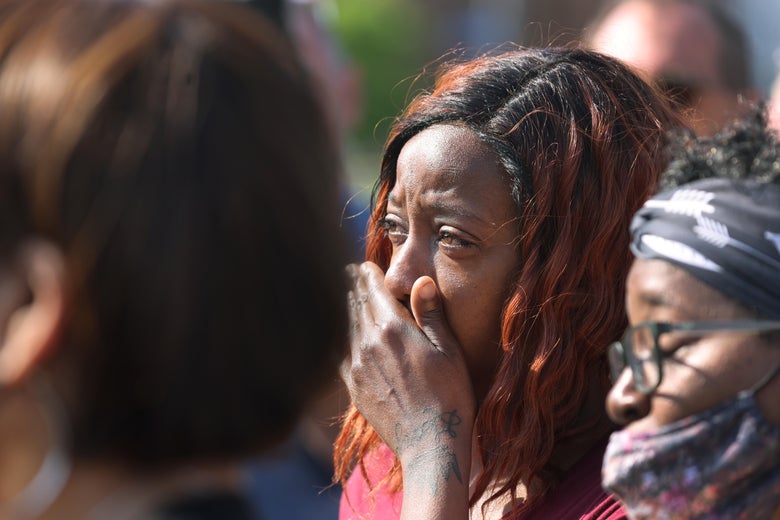 Recent events in New York have brought the grim realities of America’s gun violence problem into sharp relief. In both instances, the perpetrators took advantage of the nation’s lax gun laws and legally purchased firearms whose lethality would have been unimaginable to the authors of the Second Amendment. The easily modified semi-automatic AR-15 used by the white supremacist shooter who killed 10 people in Buffalo on Saturday was 200 times more lethal than the muskets that helped win the American Revolution. This attack came one month after a shooter with a Glock 9 mm handgun injured 23 people in a Brooklyn subway. Given these horrific events, it is hard to fathom how the U.S. Supreme Court could be contemplating striking down a century-old New York gun regulation, but based on the oral argument in the case, this unthinkable reality seems almost inevitable unless the court comes to its senses, abandons originalist fantasy, and recognizes the long history of gun regulation and enforcement in America, including limits on public carry.

A daily email update of the stories you need to read right now.

In an eerie foreshadowing of the Brooklyn subway shooting, the Supreme Court debated the theoretical possibility of allowing guns on New York subways in the oral argument of NYSRPA v. Bruen in November. In one notable and disturbing exchange, Justice Elena Kagan pressed former Solicitor General Paul Clement, who reluctantly conceded that it might be OK to have such a restriction on the city’s subways. In subsequent colloquy, Justice Samuel Alito erroneously suggested that criminals in New York were already widely “packing heat” on the subway, a false claim that New York’s woefully unprepared solicitor general did not bother to correct when queried. Alito appears to have gathered his facts about guns and subways from old Charles Bronson movies, not the meticulously documented evidence about gun violence and regulation supplied in the public health brief filed in the case. Unfortunately, Alito and the court’s new originalist majority appear to have difficulty telling fact from fiction. Indeed, instead of consulting history, as originalist theory requires, the justices seem perfectly happy to parrot the propaganda dished out in briefs bought and paid for by the NRA and other extremist gun rights groups.

It is bitterly ironic that the arguments and logic that Alito put forth in his leaked draft opinion in Dobbs v. Jackson Women’s Health Organization unambiguously support New York, not the gun rights group challenging New York’s law. Alito’s history, text, and tradition approach, if applied in a rigorous and neutral fashion, favors strict gun regulations such as New York’s, not the libertarian gun rights fantasy paraded before the court in a series of briefs that confuse James Madison, the author of the Second Amendment, with Dirty Harry, the iconic character made famous by Clint Eastwood.

In his Dobbs draft, Alito drilled down into the history of regulation and rights during Reconstruction as the key to determining the constitutionality of abortion. In his earlier decision in McDonald v. Chicago, Alito correctly noted that the new state constitutions written after the Civil War abandoned the founding era’s obsession with militias and replaced it with a more individualistic language focused on self-defense. In a move typical of the intellectual dishonesty that pervades so much originalist legal scholarship and jurisprudence, Alito stopped reading these new texts in the middle of a sentence, the rest of which disproved his point. The same new arms-bearing provisions he cited as authoritative also expressly affirmed the right of legislatures to regulate guns in public. The original fear of British redcoats that had animated the founding generation had been supplanted by a new fear: gun violence.

Empowered by this recognition of express constitutional authority to robustly regulate arms in public, dozens of states and cities enacted laws limiting guns in public, including good cause permitting schemes similar to that in New York. The map below illustrates just how widespread such regulations were. In the Bruen oral argument, Paul Clement falsely claimed that only a smattering of laws limiting armed travel existed. In fact, millions of Americans were living under one of these types of laws by the end of the 19th century. Moreover, these laws were all modeled on racially neutral gun regulations passed by legislative bodies dominated by the same Republicans who championed the 14th Amendment. These laws were not an aberration, nor were the vast majority of them influenced by the racist Black Codes written by Confederates who had sought to disarm recently freed Black people; they were part of a reinvigoration of long-standing police power limits on armed travel in public, restrictions that existed for hundreds of years under Anglo-American law.

The recent horrors in New York demonstrate the madness at the root of the modern radical gun rights agenda. Fueled by a potent cocktail of gun rights mythology and an invented vision of the past, this radical libertarian ideology has no roots in text, history, or tradition. Striking down New York’s gun law, a law on the books for more than a century, is the holy grail of gun rights radicalism, a goal comparable to the right’s 50-year struggle to overturn Roe v. Wade. A victory for gun rights in this case will demonstrate once and for all that the court’s turn to originalism is a sham. Such a decision does not vindicate originalism, but shows how its method serves to conceal a version of living constitutionalism on steroids. The choice before the court could not be more clear: award the Republican Party and the gun rights movement a long-sought victory, or defend the rule of law and the proposition that originalist judges are not political hacks.