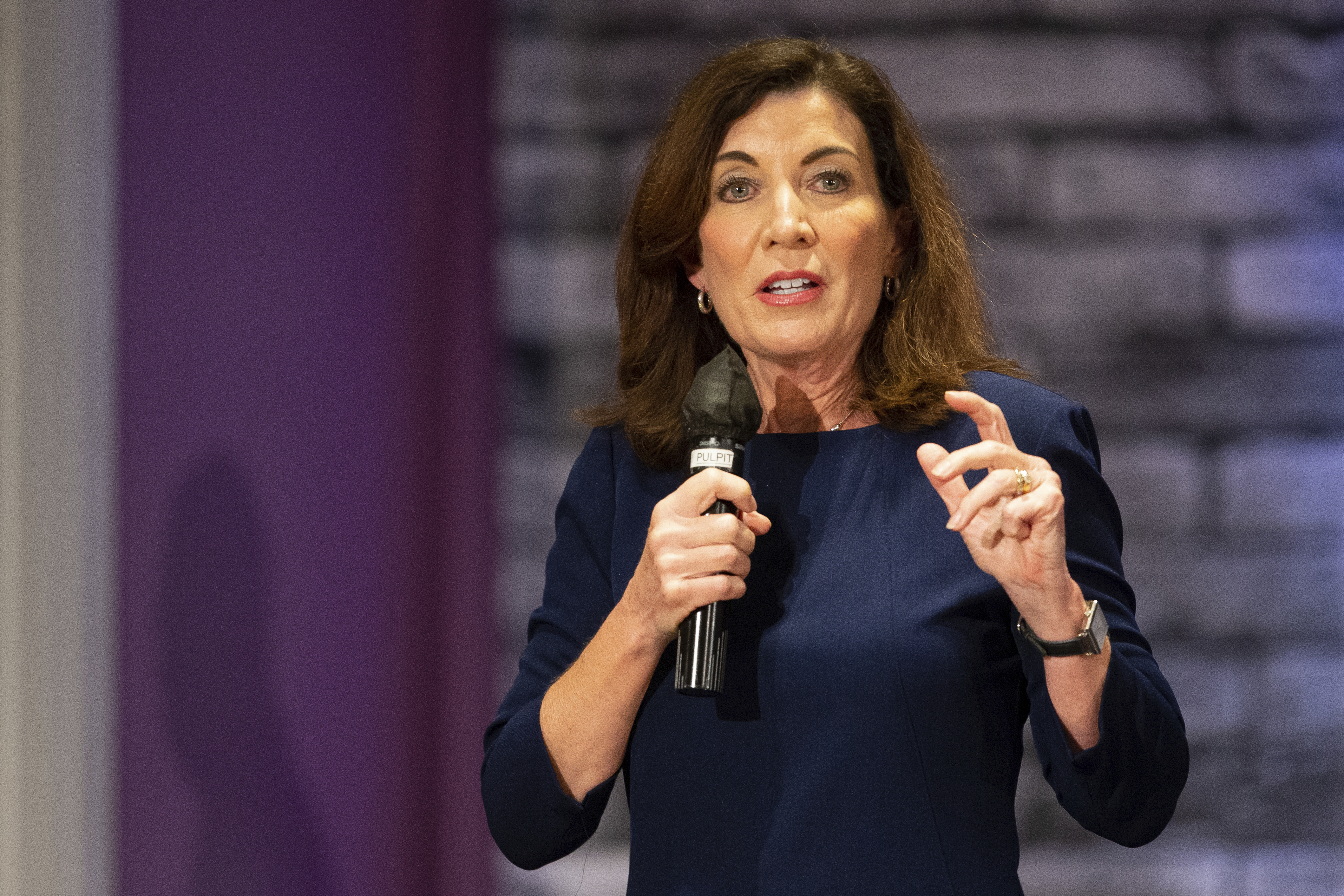 ALBANY, N.Y. — New York was already staring down a charged debate over soaring crime and how to address it. Then came the year’s deadliest mass shooting.

The deaths of 10 people Saturday at the hands of a racist man at a Buffalo supermarket thrust New York leaders and Gov. Kathy Hochul into new negotiations over how to toughen gun laws in a state with some of the toughest gun laws in the nation.

The shooting’s impact was apparent in the halls of the state Capitol on Monday as lawmakers with tears in their eyes pledged to enact new regulations with fewer than three weeks before the legislative session ends and six weeks before the state’s Democratic primary.

“This was what caused the death of many people over the weekend: simply wearing the skin they are in,” state Senate Majority Leader Andrea Stewart-Cousins said at the Capitol.

At the center is Hochul, a Buffalo native who faces a Democratic primary on June 28, nine months after taking office. As she joins the call to strengthen the state’s firearm laws, she faces potential pushback from moderate and conservative voters on how far any new gun laws go — similar to the strong criticism and plethora of critical bumper stickers and signs — tossed at then-Gov. Andrew Cuomo in 2013, when the state passed the SAFE Act gun measures.

Hochul, who rushed to Buffalo from Albany on Saturday evening as she was emerging from Covid-19 quarantine, is pivoting from her fierce defense of abortion rights to grieving with her community, bashing social media platforms for online racism and pledging to get illegal guns off the streets.

During a church service on Sunday in Buffalo she also called for “all of our white brothers and sisters” to stand up across the nation against racism “because an attack on one of us is an attack on all of us, because we are all God’s people.”

She already has a policy platform partially built around gun control and criminal justice reform as she seeks to win a full four-term term.

Hochul and the state Legislature last month agreed on a slate of new efforts to combat gun violence in the state budget, including expanding the gun offenses that are eligible for bail and allowing prosecutors to more easily pursue gun trafficking charges. The state is also investing millions of dollars in community-based gun violence prevention programs. Hochul said she will be announcing additional measures on Tuesday.

She’s likely to have a rash of Democrats standing behind her in support. Where the party has strongly divided on changes to bail laws, top officials including New York City Mayor Eric Adams and Attorney General Tish James have united in combating gun violence.

Few of her opponents have explicitly tied the brutal slaughter to political gain, save for Rep. Tom Suozzi, who is challenging Hochul in the Democratic primary. Suozzi tweeted just moments after reports of the shooting that he and his running mate, former Brooklyn City Council Member Diana Reyna, were near the scene.

“@Reyna4NY and I are in Buffalo right now, @KathyHochul’s hometown. Multiple people were just shot and killed at an East Side @TopsMarkets supermarket. Hochul refuses to make fighting crime a priority. I will.”

He earned broad online criticism, including from other elected Democrats. “You’re just as bad as the hate spewing MAGA Republicans who can’t see past their own fat egos to have an ounce of dignity,” state Sen. Alessandra Biaggi responded with a tweet of her own. “Have some goddamn respect for the moment, for the families, for the community of Buffalo.”

When asked if he stood by the Saturday tweet, Suozzi, in a statement, doubled down, pointing to Hochul’s endorsement by the National Rifle Association during her brief stint in Congress and saying that he would tackle the issue “not with pandering promises but with real leadership to actually address our gun crisis and the curse of racism and hatred.”

The shooting’s double devastation of gun violence and racist conspiracy are set to play directly into elections throughout 2022 as politicians seek both solutions and culprits.

Republicans are rejecting the idea that stricter gun laws would help by noting that the SAFE Act already installed some of the strongest gun-control laws in the nation, which apparently did not deter the shooter.

“Of course it didn’t work. We knew it wasn’t going to work then,” GOP gubernatorial candidate Rob Astorino said of the SAFE Act in an interview. “All that it has done is potentially criminalize good New Yorkers who have passed background checks to get a gun.”

He, and many in the party, say Democrats are to blame for passing criminal justice reforms that he believes softened punishment against crimes, including gun offenses. Recent changes to toughen the state’s bail laws first installed in 2019 didn’t go far enough to keep offenders behind bars.

The former Westchester County executive denied any knowledge of “great replacement theory,” a far-right conspiracy that suggests a liberal plot to decrease the influence of white people and reportedly played into the shooters’ ideology.

The sentiment is particularly pronounced in rhetoric from upstate Rep. Elise Stefanik, the third-ranking House Republican. Her campaign committee last year released an advertisement that said “radical Democrats” were planning a “permanent election insurrection” by granting amnesty to undocumented immigrants who would create a permanent liberal majority. Stefanik and her office have denied making any racist comments.

A recent Associated Press-NORC Center for Public Affairs Research poll suggests that the theory is widespread — 1 in 3 Americans believe immigrants are being brought to the country for political gains.

Astorino said he hadn’t heard of replacement theory, and he rejects the “assumption or assertion by some” that it has become mainstream within the party. “In both parties you have fringe elements and extremists, and that does not speak for the vast majority of people. Period,” Astorino said.

“The Buffalo tragedy is a brutal reminder of the raw, violent hate on the rise in New York,” Zeldin said in a statement.

Some New York Democrats said the racist motivations of the alleged shooter shouldn’t be ignored or brushed aside as an outlier heading into the election year.

“There are many pieces of strange fruit on the white supremacy tree, and if you come to our community and ask for our vote in the coming months and you do not have an ax to chop down that tree, do not come,” state Sen. Zellnor Myrie (D-Brooklyn) warned during a rally at the state Capitol Monday.

Stewart-Cousins urged members of both parties to avoid politicizing the shooting without offering legitimate solutions.

“We know that it’s been used as a political issue,” Stewart-Cousins said. “And it’s sort of been this kind of mantra: Crime is up and it’s [Democrats’] fault. As I said, we have a responsibility to look at an entire picture, and as long as you can just tell people: ‘This is the problem, you should be afraid, vote for me,’ that does not give us an answer.”

Hartmann: Eric Greitens Ties up and Blindfolds the Republican Party
How the Senator from Sandy Hook beat the NRA by caving to the GOP
OPINION | LETTERS TO THE EDITOR: On raising age for gun | Teach social justice | Bring back restaurant
GOP Rep. Says Mass Shootings From Arrows Could Happen if Guns Are Banned
Supreme Court orders Ninth Circuit to reconsider California’s ban on…