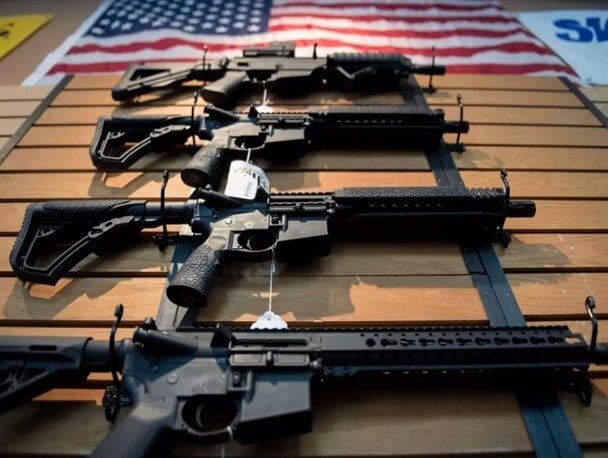 According to new data from the Centers for Disease Control and Protection (CDC) Gun murders skyrocketed in the United States in 2020, the first year of the pandemic.

Among the figures is another worrying display of racial inequity in the U.S.

More than 45,000 Americans died in gun-related incidents in 2020. The gun murder rate was the highest reported on record since 1994. It’s also the highest one-year increase in modern history.

CDC experts say the study doesn’t explain why gun homicides increased. But, they pointed to pandemic-related factors that could have possibly exacerbated the gun epidemic in America.

This is while the CDC Acting President Dr. Debra Houry warned “firearm violence is preventable, not inevitable”

The CDC says it has not finished compiling its data and research for the year 2021.

The sharp spike in people were gunned down came during the same time when calls to defund the police were sweeping the nation.

The national agency also recorded 24,245 gun suicides, an annual increase of 1.5 percent which is in line with recent trends, and the surge in gun deaths was mostly driven by the increase in murders.

Firearms are also the method of injury for most homicides and suicides (79% and 53%, respectively, in 2020).

“Programs, policies, and practices can reduce risk for violence and inequities,” Houry said.

According to the research published the reasons for this widening inequality were “unclear and potentially complex,” noting the COVID-19 pandemic might have “exacerbated existing social and economic stressors.”

However, race had played a clear role, as other minority groups were also found to have higher rates of gun deaths.

The report said “longstanding systemic inequities and structural racism have resulted in limited economic, housing, and educational opportunities associated with inequities in risk for violence and other health conditions among various racial and ethnic groups,”

Poverty levels likely reflect a range of risk factors that contribute to violence and inequities, the reports note.

According to the CDC, the circumstances of 2020, including the “COVID-19 pandemic and community–law enforcement tensions related to law enforcement use of force, have potentially contributed to increased risks for homicide and suicide, including exacerbating the social and structural factors that drive racial and ethnic inequities.”

Interestingly the report highlights that (despite the U.S. gun violence epidemic) “medical school curricula do not consistently incorporate firearm safety, violence prevention, or social determinants of health in training.”

In a statement, CDC Director Rochelle Walensky said “the tragic and historic increase in firearm homicide and the persistently high rates of firearm suicide underscore the urgent need for action to reduce firearm-related injuries and deaths,”

She insisted by addressing the “factors contributing to homicide and suicide and providing support to communities, we can help stop violence now and in the future,’

Increased gun violence linked to the coronavirus pandemic in 2020 has been widely noted previously, with the FBI reporting last year that murders had increased by 30%.

The CDC report goes further in placing the rate of murders caused by firearms at the highest level in 26 years, while also noting the disparities based on race, ethnicity, and poverty.

Just two weeks ago, research by the University of Michigan also showed that gun violence overtook car accidents as the leading cause of death among children and adolescents in the U.S. in 2020.

The finding was part of longer-term research effort from the university’s Institute for Firearm Injury Prevention.

These deaths included incidents of suicide, accidental shootings, and murders, but murders had overtaken the other two categories.

The number of deaths from car accidents and gun homicides among infants, children, and young adults has been growing closer since 2016.

Drug overdoses and poisoning increased by more than 80% between 2019 and 2020, the researchers found, to become the third leading cause of death among this demographic.

“We knew gun violence had increased but I was surprised by the level of increase for just one year,” said Dr. Jason Goldstick, a researcher with the Institute for Firearm Injury Prevention and associate professor of emergency medicine at the University of Michigan “I can’t remember ever seeing that before,” he added.

Goldstick says “these numbers are horrible, especially because these are such preventable deaths, but until very recently research has been chronically underfunded,”

He also called on the government to take action saying “our ultimate message is that a public health approach to violence prevention can work, but only if you fill in the evidence base, and to do that, you need funding.”

According to FBI data released in late 2021, the increase was again disparately felt by Black Americans, which the bureau noted “despite making up around 14% of the U.S. population accounted for nearly half of the nation’s murder victims,”

According to CDC data, although 2020 marked the first year that more children and teens were killed by guns than in car accidents, gun violence has been the number one cause of death among Black teenage boys over 15 for at least a decade.

And the Black teenage boys are not dying in high profile mass shootings on school campuses or malls. Rather, many of them lost their lives in neighborhoods where high poverty levels exist.

Amid rising unemployment and inequality rates there has been less oversight and less predictable routines for children, making it even more difficult for parents, teachers, and others to see warning signs.

Many experts blame the easy access and availability of guns as another major factor. The past year has seen consistent monthly record firearm sales. Experts say far too many of those guns are not even properly secured in homes, allowing students access to firearms.

For decades, advocates of gun control have been calling on authorities to take immediate measures to tackle the gun violence epidemic in America but many experts believe little action will be seen.

The National Rifle Association (NRA), with its increasingly record membership numbers, is such a powerful lobby group in Congress that lawmakers are unable to change the regulations.

The NRA and other gun-rights advocates claim the Second Amendment of the U.S. Constitution protects individual gun ownership.

Amid a record number of guns on the streets and more firearms among households than American citizens, these troubling death rates are unlikely to ease any time soon.