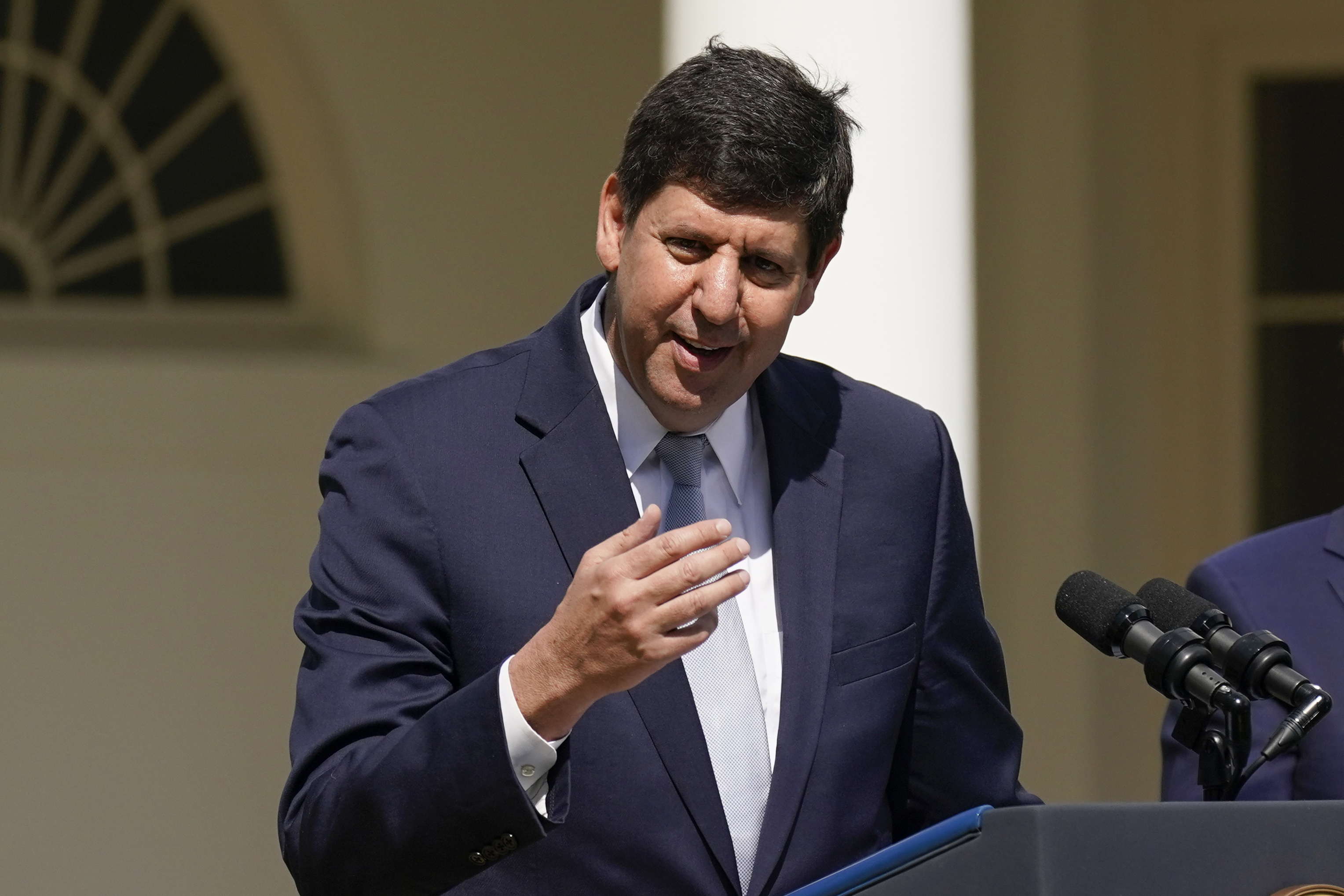 President Joe Biden’s nominee to lead the Bureau of Alcohol, Tobacco, Firearms and Explosives, Steve Dettelbach, speaks during an event in the Rose Garden of the White House in Washington on April 11, 2022. | Carolyn Kaster/AP Photo

President Joe Biden wants the Senate to do something it’s only done once in the past 16 years: confirm someone as the nation’s top gun regulator. It’s not going to be easy.

After the White House yanked its initial pick to lead the Bureau of Alcohol, Tobacco, Firearms and Explosives in September, the Biden administration and gun safety advocates are pushing for the chamber to swiftly confirm Steve Dettelbach, a former U.S. attorney. And everyone involved knows time is not on Democrats’ side: With control of the upper chamber in play this fall, Dettelbach may be Biden’s best and final chance to have a Senate-confirmed ATF director during his presidency.

The agency needs a head with the permanence of Senate approval to have the best chance at implementing Biden’s guns agenda. With little hope for bipartisan compromise on the issue in a 50-50 Senate, particularly as the midterm elections approach, Democrats are increasingly imploring the White House to take unilateral action on gun control on a smaller scale than Congress has envisioned in previous attempts at a legislative deal.

But a number of key Senate Democratic caucus members are noncommittal on Dettelbach, who supported an assault weapons ban and universal background checks during his failed bid for attorney general of Ohio in 2018. That includes those who privately opposed or didn’t back Biden’s last nominee: Sens. Angus King (I-Maine), Jon Tester (D-Mont.) and Joe Manchin (D-W.Va.). All three are set to speak or meet with Dettelbach in the coming weeks, critical conversations that will determine his fate on the Senate floor.

Meanwhile, Sen. Sherrod Brown (D-Ohio) is working behind the scenes to help confirm Dettelbach, who’s from his home state.

“We’re working the people that we needed to work from last time, the ones that went south,” Brown said Monday. “I didn’t push to move forward with this nomination not to do a floor vote.”

The Senate Judiciary Committee is still reviewing Dettelbach’s nomination and has yet to schedule his confirmation hearing. But its chair, Majority Whip Dick Durbin said he’s “ready to go as soon as they give me their thumbs-up.”

The White House withdrew its initial nominee, David Chipman, a senior policy adviser at the anti-violence group Giffords, last fall after he faced resistance from King and further hurdles with other moderate Democrats. Brown said there were “maybe three people” opposed to Chipman at the time.

Manchin confirmed he had a “problem” with Chipman’s nomination and said of the ATF job: “Some people inside the system that I heard were really good. But you know, you have to get someone who understands the people on the front line, what we are asking ATF members to do.”

King said he’s reviewing Dettelbach’s record, and Tester plans to press the nominee on his opposition to assault weapons and whether that extends to other firearms.

“He’s opposed to assault weapons, and I’m going to ask him: How did he formulate that idea, why? Does it have any impact on other guns? Are there other things we need to know about him that he would be opposed to?” Tester said.

Biden nominated Dettelbach last month at a Rose Garden ceremony announcing the finalization of an ATF regulation that mandates background checks and serial numbers for so-called “ghost guns” — untraceable firearms constructed from homemade kits sold online. Confirming Dettelbach, the White House argues, is key to their ability to crack down on gun violence.

With background checks legislation stalled in the Senate, confirming a permanent director to the agency could be the Biden administration’s last chance at defining his legacy on guns. The Senate has yet to vote on legislation the House passed last year to expand background checks for firearms purchases.

“The focus right now is on getting the ATF director confirmed and implementing the new rule on ghost guns,” said Sen. Chris Murphy (D-Conn.), one of the chamber’s staunchest gun control advocates. “Those are the two important steps forward.”

In a sign that Republican support could be hard to come by, retiring Ohio GOP Sen. Rob Portman was also noncommittal about Dettelbach, noting “this should be a nonpartisan job.”

“He has the support of law enforcement and former federal prosecutors from both parties — including appointees of both President Trump and President Bush,” said Mike Gwin, spokesperson for the White House. “If we want to crack down on gun crime and keep our neighborhoods safe, ATF needs an experienced law enforcement official like Steve Dettelbach at its helm, and if Republicans are serious about getting tough on crime, they should support Dettelbach’s confirmation.”

Since being nominated, Dettelbach criss-crossed the country to meet with local and state law enforcement. The White House and Justice Department have also formed teams to help secure support for the nominee. While its leadership remains in flux, the ATF is undergoing internal upheaval. Last month, Biden named Gary M. Restaino to become acting director until Dettelbach’s confirmation, replacing Deputy Director Marvin Richardson.

Out of those five groups, Biden’s former pick, Chipman, only received the backing of the Black law enforcement organization when he was nominated.

In anticipation of GOP attacks, the White House plans to draw a contrast with Republicans and highlight calls for abolishing the ATF from Trump-backed Ohio Republican Senate candidate J.D. Vance and Rep. Marjorie Taylor Greene. White House officials are hopeful that Dettelbach’s growing endorsements from law enforcement leaders and organizations will insulate him from Republican attacks on his gun positions.

The first — and only, so far — permanent ATF director, B. Todd Jones, was tapped by then-President Barack Obama and confirmed in 2013. (Until 2006, the position did not require Senate approval). Confirming an ATF director is notoriously difficult: Former President Donald Trump’s ATF pick Chuck Canterbury was withdrawn in 2020 over lack of GOP support.

In keeping with that political reality, Dettelbach is guaranteed to face a tough Judiciary Committee hearing. During Chipman’s appearance before the panel, Senate Republicans grilled him on a past interview where he suggested that new gun owners with no training should only take out their firearms “if the zombies start to appear,” among other previous public appearances.

Durbin observed it’s been “years” since ATF had a permanent director, suggesting it’s a testament to the influence of pro-gun groups in the Senate and a coordinated strategy to keep the agency unstaffed.

“The reason it’s not confirmed is, the National Rifle Association and gun groups don’t want an organized agency implementing the laws,” Durbin said. “The best thing they can do is keep the director out of a job.”

Andrew Desiderio contributed to this report.