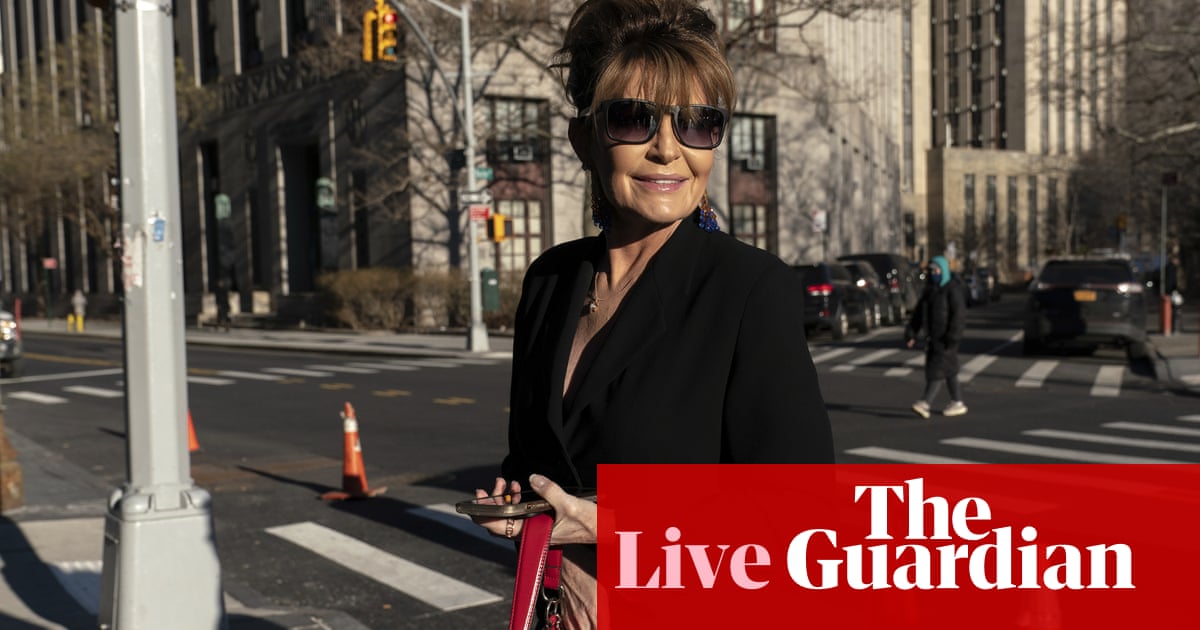 A judge said today that he will order the dismissal of former Alaska governor Sarah Palin’s defamation lawsuit against the New York Times, Reuters is reporting.

District Judge Jed Rakoff ruled that the 2008 Republican US vice-presidential candidate did not present sufficient evidence to win her lawsuit, in which she argued that a 2017 editorial incorrectly linked her to a mass shooting six years earlier that wounded Democratic congresswoman Gabby Giffords.

Palin is expected to appeal the decision.

The accounting firm Mazars has said it can no longer stand behind annual financial statements it prepared for the Trump Organization between 2011 and 2020, Reuters is reporting.

In a letter cited by the New York Attorney General’s office in a court filing today, the firm stated that it had come to this conclusion based on filings made by the attorney general, “our own investigation” and other information from different parties.

“While we have not concluded that the various financial statements, as a whole, contain material discrepancies, based on the totality of the circumstances, we believe our advice to no longer rely upon those financial statements is appropriate,” Mazars said in its letter.

Mazars concluded the letter by saying it would no longer “provide any new work product to the Trump Organization”.

Deputy White House press secretary Karine Jean-Pierre hedged on a question on whether Joe Biden will begin interviews with his supreme court candidates this week. She said the president has had a series of conversations and good discussions and continues to review materials, but “I don’t have anything else to share on any interviews.”

“He has not interviewed potential nominees, to be clear, but he is on track to select a SCOTUS nominee by the end of this month,” she said.

Deputy White House press secretary Karine Jean-Pierre has taken to the podium for the press briefing, the top topic of which is the growing threat of the Russian invasion of Ukraine. For more on the situation on the Ukraine border, check out our live updates here.

Jean-Pierre touched upon again the statement that Joe Biden issued earlier today marking the fourth anniversary of the shooting at Marjory Stoneman Douglas high school in Parkland, Florida, that killed 17 people and wounded 17 more – the deadliest school shooting in the country.

She also spoke about vice-president Kamala Harris and her announcement today that more than 10 million households are enrolled in the Affordable Connectivity Program as part of the bipartisan infrastructure law.

A judge said today that he will order the dismissal of former Alaska governor Sarah Palin’s defamation lawsuit against the New York Times, Reuters is reporting.

District Judge Jed Rakoff ruled that the 2008 Republican US vice-presidential candidate did not present sufficient evidence to win her lawsuit, in which she argued that a 2017 editorial incorrectly linked her to a mass shooting six years earlier that wounded Democratic congresswoman Gabby Giffords.

Palin is expected to appeal the decision.

Majority leader Chuck Schumer is on the senate floor giving a quick rundown on what’s to come.

For the postal service reform bill, which had some technical issues, Schumer said he’ll move today to fix the legislation – but he’ll need unanimous consent. Yesterday, a Schumer spokesperson mentioned that senator Rick Scott was standing in the way of a technical fix for the bill.

Donald Trump is putting his weight behind rightwing Republican candidates who support his baseless claims of a stolen election in key battleground states like Michigan – which is raising alarm over how fair elections will be in these states in the future.

Reminder that we have a live blog with live updates on the growing threat of a Russian invasion of Ukraine. Follow here for more:

Daily Show host and comedian Trevor Noah is set to host the White House Correspondents’ Association dinner this year – after two years of the annual media shindig being cancelled due to the pandemic.

“The announcement of Noah as the dinner’s featured entertainer represents a return to normalcy for the highly anticipated gathering of Washington journalists, politicians and elite society, which in the past drew big-name comedians to preside over the event known as “Nerd Prom.”

But after [Michelle] Wolf’s performance in 2018 — which saw the comedian savage Trump administration officials such as then-press secretary Sarah Huckabee Sanders — proved too polarizing for some attendees, the WHCA selected presidential biographer Ron Chernow to speak at the 2019 dinner. The dinner was then canceled in 2020 and 2021 due to coronavirus-related concerns.”

A person shot at a mayoral candidate today in Louisville, Kentucky.

While candidate Craig Greenberg was uninjured, a round came close enough to him to pierce his clothing. The suspect is in custody, but police have not released a motive.

This shooting takes place on the fourth anniversary of the Parkland, Florida shooting at Marjory Stoneman Douglas high school – the deadliest shooting in the country that killed 17 people.

Meanwhile, Washington is lifting its mask mandate in places like restaurants and businesses beginning 1 March, but it will remain in place for schools and healthcare facilities.

Democrats on the Senate judiciary committee are urging Joe Biden to hurry up and choose someone for his supreme court nomination while they still have the narrow 50-50 majority vote, the Hill reports.

Earlier this month, Ben Ray Luján, a 49-year-old freshman Democratic senator from New Mexico, suffered a stroke and will likely need to miss four to six weeks of work to recover.

With this one medical emergency already putting a strain on the Democrats’ narrow majority, Dick Durbin, chair of the Senate judiciary committee, told the Hill: “I think we understand the importance of the responsibility we have and we’re anxious to get this senate moving forward. We started to pick up speed recently and we want to continue that,” he said.

Joe Biden is back at the White House, after spending the weekend at Camp David:

In sports news, there was a widely televised football game yesterday. During the Super Bowl half-time show, the rapper Eminem took a knee and held his head in apparent tribute to former San Francisco 49ers quarterback Colin Kaepernick, who took a knee during the national anthem to protest police brutality during the 2016 season.

After other players followed suit – in other sports as well – the move became a cultural controversy, with many believing that Kaepernick has been blackballed by the league’s teams and owners for taking his stance.

Immediately after Eminem took a knee, rumors began flying that the National Football League had attempted to stop him from doing so ahead of the game – in 2020, following the widespread protests over the police murder of George Floyd, the NFL famously had to apologize for not listening to its players earlier in their peaceful protest.

Today, however, the NFL has come out strong in denying the rumors that it tried to stop Eminem from taking a knee.

“We watched all elements of the show during multiple rehearsals this week and were aware that Eminem was going to do that,” league spokesman Brian McCarthy said.

Meanwhile, majority leader Chuck Schumer is saying that a bill looking to reform the post office is set to hit the senate floor.

But Punchbowl News is reporting that senate likely won’t be able to take up the legislation until March: House clerks mistakenly enrolled the wrong version of the bill, meaning that Schumer filed cloture on the wrong version.

Today is the fourth anniversary of the shooting at Marjory Stoneman Douglas high school in Parkland, Florida, that killed 17 people and wounded 17 more – the deadliest school shooting in the country.

Manuel Olivier, whose son Joaquin was one of the 17 killed that day, is now apparently on top of a construction crane a block from the White House, surrounded by police.

It is unclear if Olivier is staging a protest, but he has been outspoken in the past in his crusade against gun violence.

Joe Biden released a statement today acknowledging that “out of the heartbreak of Parkland a new generation of Americans all across the country marched for our lives and towards a better, safer America for us all”.

“Together, this extraordinary movement is making sure that the voices of victims and survivors and responsible gun owners are louder than the voices of gun manufacturers and the National Rifle Association,” the statement reads.

Biden continued: “I’ve asked Congress to pass a budget that provides an additional half billion dollars for proven strategies we know reduce violent crime – accountable community policing and community violence interventions. I have also requested increased funding for the Bureau of Alcohol, Tobacco, Firearms and Explosives and the US marshals. And Congress must do much more – beginning with requiring background checks on all gun sales, banning assault weapons and high-capacity magazines and eliminating immunity for gun manufacturers.

All eyes in Washington continue to be on the growing threat that Russia will invade Ukraine, with Jake Sullivan, the national security adviser, set to brief House and Senate leaders later today on the situation. Tune into our live blog on the tensions here for updates.

While Senate is in session today, Punchbowl News is reporting that the odds are pretty low on whether there could be any legislative action taken on sanctions against Russia ahead of military action. Though the majority leader, Chuck Schumer, told reporters last week that lawmakers were getting “closer and closer” to agreement on a Russia sanctions bill, the minority leader, Mitch McConnell, downplayed the impact of it, saying it was up to Joe Biden to decide the importance of such action.

Last week, the major hangup was over whether the sanctions would be imposed on all Russian banks and over Nord Stream 2, according to Bob Menendez, chair of the Senate foreign relations committee.