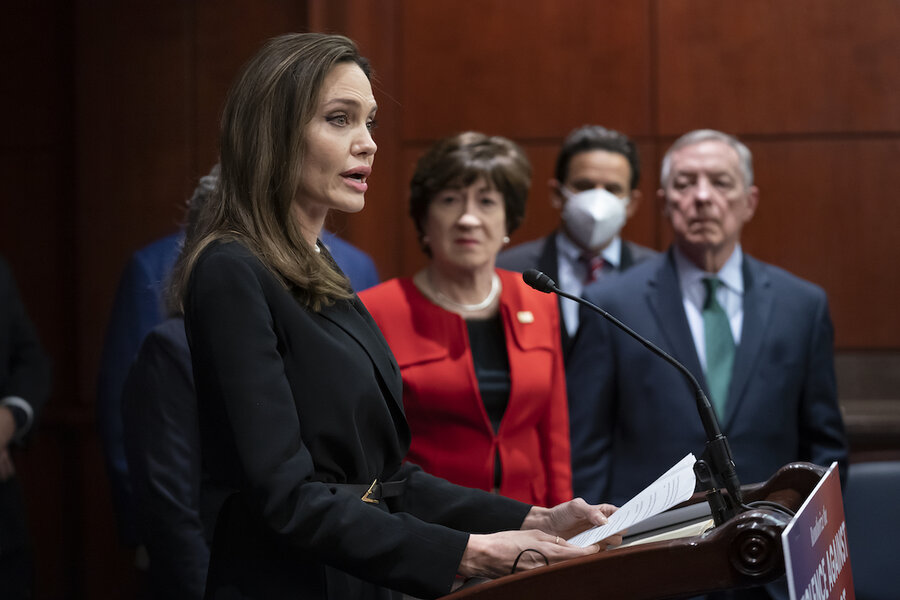 A bipartisan group of U.S. senators introduced a proposal Wednesday to reauthorize the 1990s-era law that extends protections for victims of domestic and sexual violence after it lapsed in 2019 because of Republican opposition.

Sen. Dick Durbin announced a bill to renew the Violence Against Women Act alongside his Democratic and Republican colleagues who were also joined by domestic violence survivors and actor and advocate Angelina Jolie.

“For those who have given up hope on the United States Senate functioning, passing important laws, working together on a bipartisan basis, take a look behind me,” Senator Durbin, D-Ill., said.

Ms. Jolie told lawmakers the stakes are high. “This is one of the most important votes you will cast this year in the Senate,” she said.

The last time the law was reauthorized was in 2013. Republicans have since blocked the legislation from passing in the Senate over a provision that would prohibit persons previously convicted of misdemeanor stalking from possessing firearms, which generated opposition from the National Rifle Association. That provision was excluded as part of the deal.

Ms. Jolie gave an emotional speech urging Congress to reauthorize the law. “Standing here at the center of our nation’s power, I can think only of everyone who has been made to feel powerless by their abusers, by a system that failed to protect them,” she said.

“The reason that many people struggle to leave abusive situations is that they’ve been made to feel worthless,” Ms. Jolie added. “When there is silence from a Congress too busy to renew the Violence Against Women Act for a decade, it reinforces that sense of worthlessness.”

The law, first introduced in the Senate in 1990 by President Joe Biden when he was a senator from Delaware, aims to reduce domestic and sexual violence and improve the response to it through a variety of grant programs. A subsequent version was eventually included in a sweeping crime bill that then-President Bill Clinton signed into law four years later. Congress has reauthorized the Violence Against Women Act three times since.

The bipartisan proposal announced Wednesday would not include the so-called boyfriend loophole. Republican Sen. Joni Ernst of Iowa and Democratic Sen. Dianne Feinstein of California have been working on the plan to extend the law with 60 votes since 2019 and the lawmakers believe this time they can make it happen.

“I have full confidence that this is going to pass in the Senate,” Senator Ernst, a survivor of domestic violence, told reporters. “And I know that there were provisions that we didn’t get into the bill. And I have said all along that the point is not for it to be a political football to use as a tool during campaigns.”

She added that while Democrats are not happy without the inclusion of the provision to restrict firearms from potential abusers, what’s important now is to get something at least 60 senators can agree on “and then come back and keep working on the issues that we haven’t been able to solve yet.”

Senator Durbin, the Democrats’ chief vote-counter, said the Senate is “perilously” close to reaching that threshold of support, but that the bill will not come on to the floor before late February.

President Biden, the architect of the act, applauded the bipartisan group of senators that had come together on this.

“Combatting domestic violence, sexual assault, dating violence, and stalking should not be a Democratic issue or Republican issue,” the president said in a statement Wednesday. “It’s a matter of justice and compassion. I am grateful that this critical bipartisan bill is moving forward, and I look forward to Congress delivering it to my desk without delay.”

Get stories that
empower and uplift daily.

The original bill created the Office on Violence Against Women within the Justice Department, which has awarded more than $9 billion in grants to state and local governments, nonprofits, and universities over the years. The grants fund crisis intervention programs, transitional housing, and legal assistance to victims, among other programs. Supporters said the reauthorization would also boost spending for training law enforcement and the courts.

This story was reported by The Associated Press. AP writer Zeke Miller contributed to this report.

Wood Kerf
DeepMedia Partners With Department of Defense on Deepfake Detection and Translation Tools, Receives Phase 1 SBIR Funding
Learning from the Masters Making a Knife with Jason Knight Part 3
First Look: Bond Arms Stinger RS And Rawhide In .22 LR
5 Secret Tips on how to get better at Archery!