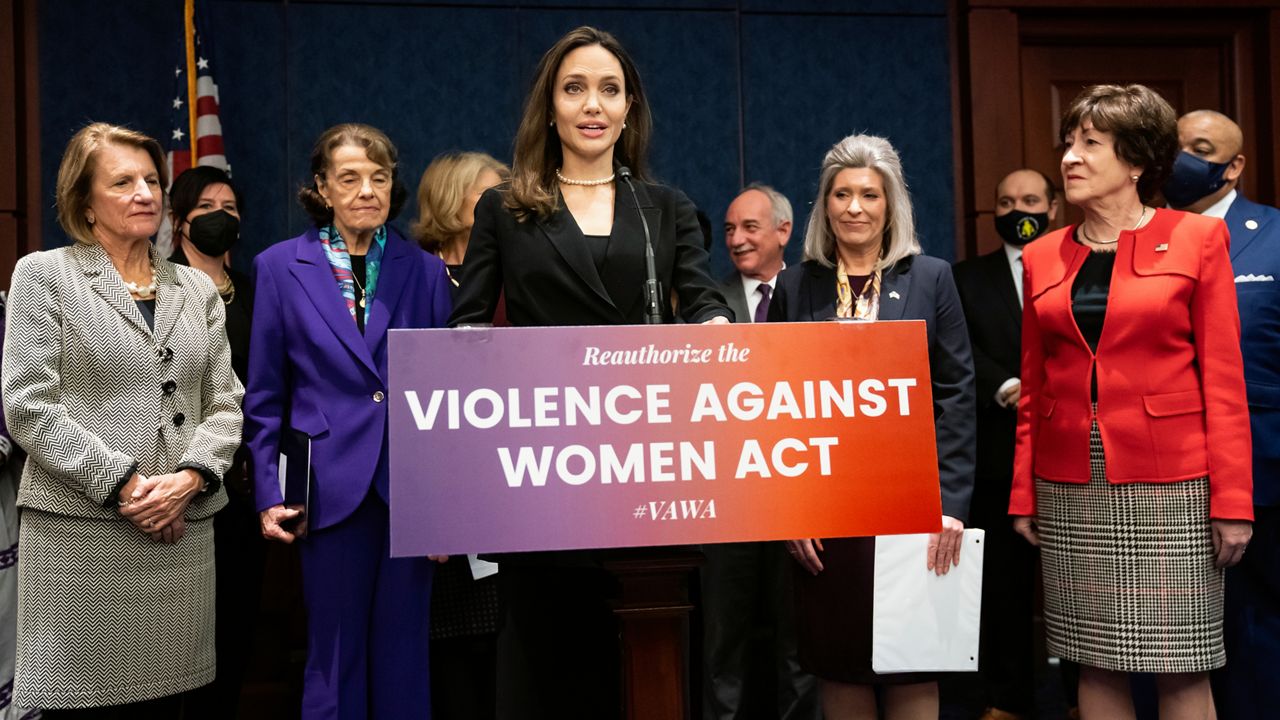 Academy Award-winning actress Angelina Jolie joined a group of bipartisan lawmakers on Capitol Hill Wednesday who announced they have reached a deal on a “modernized” version of the Violence Against Women Act.

The original version of the bill — sponsored in the Senate by then-Delaware Sen. Joe Biden — was signed into law in 1994 by then-President Bill Clinton after it passed both chambers of Congress with bipartisan support. It provided funding to investigate and prosecute violent crimes against women, money for grants to support sexual assault and domestic violence victims and established the Office on Violence Against Women within the Justice Department.

The bill was previously reauthorized in 2000, 2005 and 2013, but expired in 2018. Lawmakers have long since attempted to negotiate a subsequent reauthorization, including the House passing a bill to do so in 2019, but Senate talks fell apart. Congress still funds programs related to assault and domestic violence at the bill’s 2018 levels.

A bipartisan group of lawmakers, including Iowa Sen. Joni Ernst, herself a survivor of sexual assault and domestic violence, announced the deal at a press conference on Wednesday.

“I think we can almost let out a sigh of relief,” Sen. Ernst said. “But we need to get this over the finish line, and we will.”

The goal, Ernst said “to come to a solution that won’t just be a political talking point for one side or another, but a bill that can gain bipartisan support needed to pass the Senate and truly deliver for my fellow survivors of these life altering abuses.”

The Iowa Republican touted that the agreement boosts resources for survivors in rural areas “who are so often forgotten.”

Ernst was joined by the bill’s co-authors, Sens. Dick Durbin, D-Ill., Lisa Murkowski, R-Alaska, and Dianne Feinstein, D-Calif., along with Sens. Susan Collins, R-Maine, Shelly Moore Capito, R-W.Va., and Jolie, who described it as “one of the most important votes you will cast this year in the Senate.”

“Standing here at the center of our nation’s power, I can think only of everyone who has been made to feel powerless by their abusers by a system that failed to protect them,” Jolie said, joined by her daughter Zahara Marley Jolie-Pitt. “The reason that many people struggle to leave abusive situations is that they’ve been made to feel worthless.”

“The ugly truth is that violence in homes is normalized in our country,” Jolie said, adding: “When there is silence from a Congress too busy to renew the Violence Against Women Act for a decade, it reenforces that sense of worthlessness.”

Jolie has been a mainstay on Capitol Hill in recent months, lobbying lawmakers to reauthorize the act in September and December of 2021.

The deal to reauthorize the act comes after the so-called “boyfriend loophole,” a provision which allows people convicted of domestic abuse to buy or own guns, was dropped from the bill. Closing the loophole is opposed by the National Rifle Association, the powerful pro-gun lobbying group with large influence over Republican lawmakers.

Durbin said it was a “tough choice” to drop the provision to close that loophole.

“Our bill is a compromise,” Durbin said. “It doesn’t include everything Sen. Feinstein and I wanted, or everything Sen. Ernst and Murkowski wanted. And there are provisions that all four of us very much wanted to include, such as an end to the loophole that allows abusers who harm dating partners to continue to have access to guns.”

“[The bill] needs 60 votes and in order to get anywhere near 60 votes that provision became controversial and we had to measure the remainder of the bill against that provision,” he said. “It’s a tough choice. We made a choice we thought was right.”

“This isn’t a perfect bill, and I regret that the boyfriend loophole is not addressed,” Sen. Feinstein said, adding: “Many of us have tried very hard to get there, but it’s a good bill and we need to finally get a Violence Against Women Act re-authorization to the President’s desk.”

Durbin said that the Senate will take up the bill soon, with Majority Leader Chuck Schumer, D-N.Y., waiting “for a signal that we have 60 [votes] and we can pass the bill.”

“When we return from the President’s Day recess we hope to be able to report to him quickly,” he added.