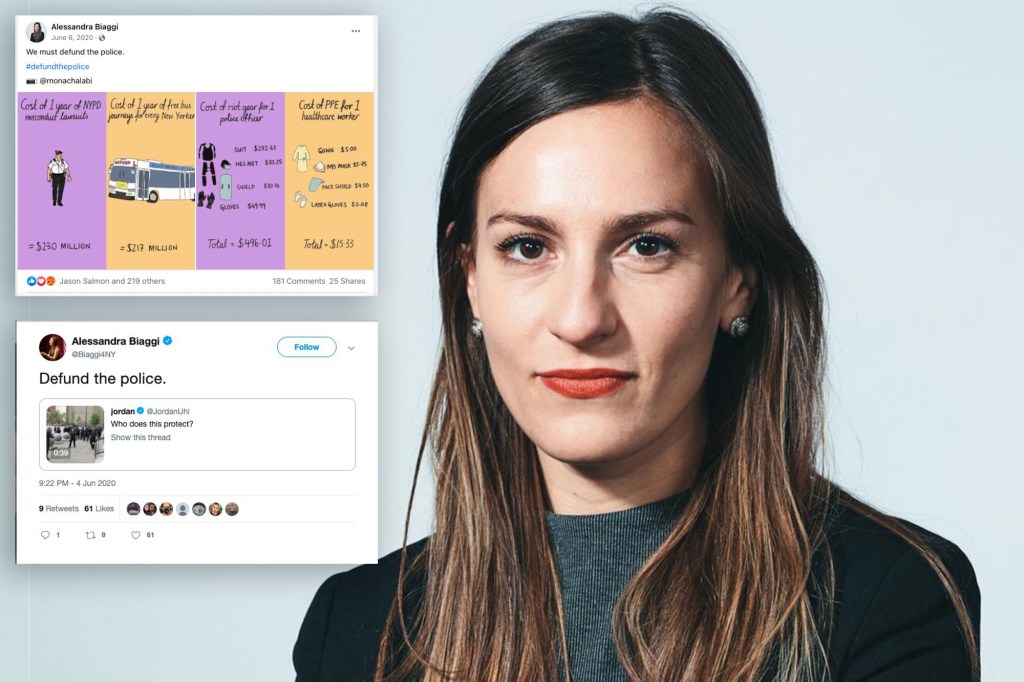 Liberal Bronx Democratic state Sen. Alessandra Biaggi — a champion of “defunding” the police, who once called cops “soulless” — is running for Congress in a new gerrymandered third congressional district that takes in the leafy suburbs of Long Island, Queens, Westchester and parts of the Bronx.

Biaggi’s anti-police funding tweets — many of which were scrubbed from her Twitter account but were captured in screen grabs — could haunt her in a district where many moderate Democrats support law enforcement.

Even some progressives have abandoned the tone-deaf mantra amid a spike in crime in a city led by an ex-cop, Mayor Eric Adams.

“Today #TeamBiaggi dropped off 550 meals with Rethink Food NYC to New Yorkers at Occupy CityHall fighting for budget justice and defunding the police. Stay safe, and keep up the good work!#DefundTheNYPD,” Biaggi said in a June 26, 2020 tweet.

Biaggi then posted a comparison of the cost to the city to pay for NYPD misconduct lawsuits to the potential price tag of providing free bus service to New Yorkers.

In another, she compared the costs of police riot gear to personal protective equipment for health care workers fighting the coronavirus pandemic. The congressional candidate also posted a story on Oct. 30, 2020 about police allegedly beating a black woman during a protest.

“The police in this country are soulless,” Biaggi said.

Biaggi also has boasted of her support for New York’s controversial bail reform law, which eliminated cash bail for many alleged crimes, allowing defendants to remain free instead of being detained pending crime.

But the senator makes no mention of her support of defunding police or the bail law on her new congressional campaign website.

But an archived version removed from her campaign site does mention her support for the bail law and says, “New Yorkers are overpoliced and underprotected: while thousands and thousands of nonviolent misdemeanors are pushed through the system every year, shootings and sexual assaults are solved and prosecuted at abysmal levels.”

Rep. Tom Suozzi, a Democrat who is giving up the congressional seat to run for governor, suggested that Biaggi won’t be a good fit for the district.

“The people of my district want a common-sense Democrat who will not pander to the left or back down to the right. I will not support anyone who is anti-Israel, supported by the Democratic Socialists, or who sides with the defund the police crowd,” Suozzi told The Post.

Asked about expected criticism of her support for defunding the police and bail reform, Biaggi said, “I am committed to strengthening public safety, and every policy stance I take related to policing and criminal justice reform is rooted in supporting our communities.

“I have worked hard to make our communities safer, strengthening gun laws and protecting victims of sexual assault. I’ll continue to do that in Congress, making sure police are focused on violent crime, investing in violence prevention programs, and standing up to the NRA and Republicans so we can finally crackdown on the flow of illegal guns into New York.”

Biaggi, 35, is an energetic campaigner. She defeated ex-Bronx state Sen. Jeff Klein in the 2018 primary. She effectively tied Klein to Donald Trump and the GOP after the Democratic incumbent for years formed an alliance with Republicans in the state Senate.

She is the granddaughter of the late Congressman Mario Biaggi, a 19-year representative and decorated ex-cop whose career ended in disgrace after being convicted in two corruption scandals.

George Santos, a financier from Queens, is seeking the Republican nomination.

Biaggi, in an announcing why she’s running on her website said, “As a New York State senator, I’ve delivered progressive change in Albany. Now I’m ready to do the same in Washington.

“I am running for Congress to protect and defend our democracy, to halt the climate crisis, to grow our supply of affordable housing, and to transform our government and economy to serve us all. Several of the most important fights in our country’s history are taking place in Washington right now, and I want to be on the frontlines.

Biaggi has to give up a safe state Senate to run for Congress. Bronx Assemblywoman Nathalia Fernandez is among Democrats eyeing Biaggi’s 34th senatorial district seat, along with Councilwoman Marjorie Velazquez and Kate Theobald, chief of staff to Manhattan Councilman Keith Powers, according to City&State.