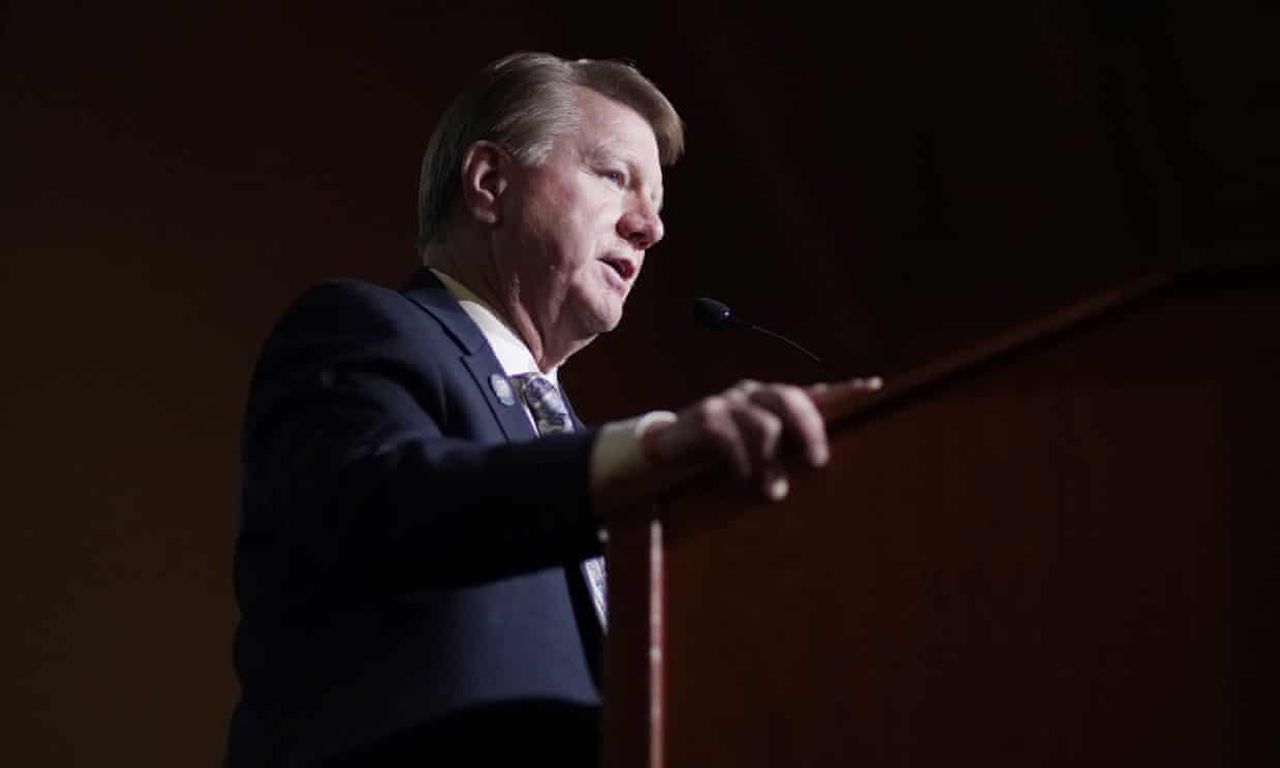 Far-right Republican candidates running for the top election position in at least eight states are proclaiming their adherence to Trump’s fascistic lie that the 2020 presidential election was stolen. At the same time, they are making clear their readiness to overturn future elections.

The coalition of candidates was first announced by the head of the group, Jim Marchant, himself a candidate for secretary of state in Nevada. A former Nevada state legislator, Marchant announced the formation of the fascistic group during an appearance on former Trump White House adviser Steve Bannon’s “War Room Pandemic” podcast on January 4, 2022.

In his interview with Bannon, Marchant revealed that he was attending a “private conference” in Washington D.C. with other far-right secretary of state candidates. Marchant said the conference was headed by former Trump White House chief of staff Mark Meadows, former South Carolina senator and ex-president of the Heritage Foundation Jim DeMint, and conservative lawyer Cleta Mitchell.

Both Meadows and Bannon have been referred by Congress to the Department of Justice for contempt charges for their refusal to cooperate with the House Select Committee on January 6, which is charged with investigating Trump’s attempted coup. While the Justice Department formally charged Bannon 22 days after the criminal referral by Congress, it has yet to charge Meadows, even though more than 44 days have passed since Congress voted to hold him in contempt.

Cleta Mitchell, a long-time Republican lawyer and politician, played an integral part in Trump’s failed coup. On January 2, 2021, she participated in the hour-long telephone conversation between Trump and Georgia Secretary of State Brad Raffensperger during which Trump threatened Raffensperger with prosecution for not lending credence to Trump’s election fraud claims. Trump pressured Raffensperger to “find 11,780 votes” to overturn the state’s presidential vote and hand the Biden electors to him.

That Trump’s coup had deep support within the ruling class is exemplified by Mitchell’s participation. In addition to serving in the Oklahoma House of Representatives for eight years, Mitchell sits on the boards of several conservative foundations, including the Bradley Foundation and the National Rifle Association. She is a former president of the Republican National Lawyers Association.

Speaking to Bannon, Marchant claimed that the purpose of the conference was to find “ways to influence the next election in 2022,” and “export it all over the country.” In furtherance of this scheme, Marchant announced the formation of the “America First secretary of state candidates,” who would work “behind the scenes to fix 2020 like Trump said.”

Bannon readily agreed with the proposal and reiterated the wider Republican electoral strategy of mass voter disenfranchisement. Referring to Republican efforts to mobilize “poll watchers,” Bannon said that “when we have people in there watching what they are doing, you’re going to have a fair count—as long as you get rid of these mail-in ballots—you’re going to have a fair count.”

Marchant reiterated the Republican Party’s’ strategy in an event earlier this month in Reno, Nevada, which was reported on by CNN. Marchant said: “We gotta watch the polls. We gotta watch people counting the votes. We got to challenge the courts.”

Marchant has claimed that if victorious in his race for secretary of state, he will eliminate early voting and mail-in ballots. He promotes far-right conspiracy theories made popular by Trump-surrogate and MyPillow CEO Mike Lindell. Claiming, without evidence, that “tainted ballots” rigged the election against Trump, Marchant advocates the elimination of electronic voting machines in Nevada and the purchase of new paper ballots with “watermarks and holograms.”

In subsequent statements and interviews, including with the Guardian, Marchant has named other members of his group and revealed plans for future “conferences.” Last August, Marchant was one of at least 40 Republican-aligned politicians and candidates who participated in a QAnon conference in Las Vegas, Nevada.

Speaking to the Guardian, Marchant revealed that Republicans Jody Hice (Georgia), Mark Finchem (Arizona) and Kristina Karamo (Michigan), all of whom have already been endorsed by Trump, are part of the coalition. Unsurprisingly, all of them have embraced Trump’s lies, claiming, without evidence, that there was massive fraud in the 2020 election.

Marchant has also stated that Rachel Hamm (California) and David Winney (Colorado), in addition to two unnamed candidates in Minnesota and Wisconsin, will be joining the group.

Finchem, an admitted Oath Keeper who participated in the planning and storming of the US Capitol on January 6, attended the Las Vegas QAnon conference, along with Karamo and Marchant.

The anti-democratic effort headed up by Marchant is not some fringe movement on the margins of the Republican Party. It no doubt has wide support within the GOP, which is transforming itself into a fascist party.

Asked by the Guardian if he would be willing to participate in a fraudulent elector scheme as he had in 2020, Marchant replied, “That is very possible, yes.”

In an interview with CNN, US Deputy Attorney General Lisa Monaco indicated that the Justice Department had begun an investigation into “fraudulent elector certifications,” but refused to reveal who was being investigated or if there were pending charges.

While the Republicans openly declare their intention to rig the election, Biden and the Democrats meekly call on their supporters to “defend democracy” by “voting this November.” The fact that Trump nearly succeeded in his coup despite the Democrats and Biden winning the White House and taking control of Congress shows the impotence of this kind of appeal.

More than a year after Trump’s failed coup, neither Trump nor any of his high-level accomplices has been prosecuted.

That Trump and his co-conspirators, including Bannon and Meadows, are not only walking free, but able to plot their next coup in the open, is entirely the fault of Biden and the Democratic Party. Beholden to the same billionaire class and financial oligarchy as Trump, the Democrats are doing their best to cover up the scale of the fascistic conspiracy for fear opening the way for a massive response from below against the entire rotten capitalist order.

The fascist insurrection in Washington DC is a turning point in the political history of the United States.