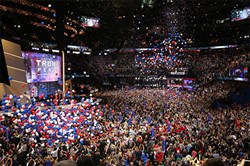 Having made it a couple of weeks into 2022 without any major new attacks on democracy (fingers crossed), let us briefly turn our attention to 2024 politics: How does the prospect of tens of thousands of ardent Republicans or Democrats swarming through Nashville strike you?

I ask because, at the behest of Gov. Bill Lee, Nashville is applying to host the Republican or Democratic national conventions in that presidential election year.

Or maybe both. Why aim low?

Butch Spyridon, CEO of the Nashville Convention & Visitors Corp., says a bid was submitted to Republicans Dec. 8 and a request for proposal requirements was sent to Democrats Nov. 2.

Nashville has already landed in the Final Four for the GOP convention, according to various reports, along with Milwaukee, Pittsburgh and Salt Lake City. But Democrats haven’t responded to the query.

The potential for Nashville as host sent me researching the history of convention sites since 1856, the first year the antecedents of today’s two main parties held presidential nominating conventions.

Between those two cities, I suspect that a relatively central location has largely contributed to Chicago’s popularity, deep-dish pizza being no competition for a good Philly cheesesteak.

Nor is hot chicken, for my money, but I’d be fine with either or both groups coming to Nashville. For one thing, I suspect we routinely have thousands of Republicans visiting the city already, because I assume any visitors wearing cowboy boots or hats vote conservative.

I’m not sure why I assume that, other than my suspicion that no one in that garb wears it ironically.

Is there a similar telltale sign that would identify visiting Democrats during a convention? Glum expressions, perhaps. High levels of anxiety. And, among a significant number, darker complexions.

Spyridon said impartiality guides his group’s involvement with any prospective visitors. “It’s not appropriate for the NCVC to pick and choose which groups get to meet in Nashville,” he says.

He also has no reservations about whether the city has what it takes to accommodate a bunch of party faithful, along with the media types and hangers-on who would also flock here for the show.

“Nashville is perfectly positioned to handle events of this type,” he points out. Previous experience with the Southern Baptist Convention, National Rifle Association, NFL Draft and CMA Fest compares in scope and size, he adds.

“Size is not the real challenge – security and the lengthy period of ramp up pose the logistical challenges.”

Another potential complication is that Nashville’s dance card for 2024 isn’t exactly empty.

“We have a pretty full year of conventions in 2024 with 27 conventions already booked for Music City Center that year,” Spyridon says. “We won’t know the potential conflicts until firm dates are set.”

What’s more, the competition for hotel bookings could prove problematic. I doubt either party would be amenable to having delegates stay in people’s houses. Besides, I don’t know that you could find enough willing Republicans in Davidson County to meet the need.

Based on my informal survey of yard signs, a lot of people here believe in things that won’t show up in a Republican Party platform.

Mayor John Cooper, through a spokesman, has indicated financial considerations will determine his support. Spyridon notes his organization is assuming private fundraising efforts would cover the costs to the city, and the potential return on investment “is well north of $40 million to $50 million.”

Apart from cash windfalls, some cities probably factor in the value of publicity. I like the way Spyridon downplays that element of the equation for Nashville.

“[W]e have been fortunate to receive national and international recognition as a destination so that a convention may not be as valuable to us as it would be for other cities,” he says.

Having been to Milwaukee and Pittsburgh a couple of times, I can vouch that they are both fine places to spend time, especially when that time involves Major League Baseball. And both are in battleground states that have been pivotal in the past two presidential elections.

All in all, I suspect we won’t be taking the crown in either 2024 convention pageant. But I like our chances for Miss Congeniality.

Joe Rogers is a former writer for The Tennessean and editor for The New York Times. He is retired and living in Nashville. He can be reached at jrogink@gmail.com