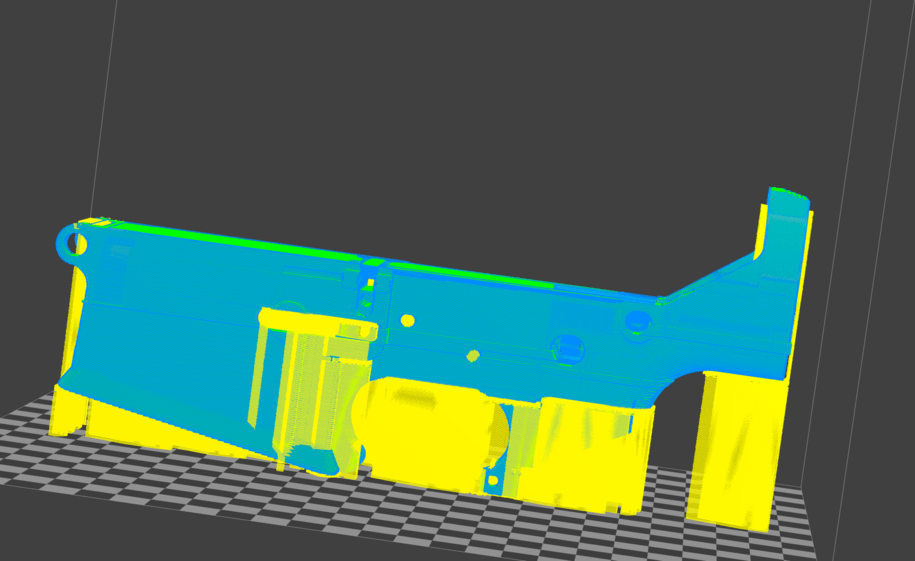 Between 2016 and 2020, over 23,000 unserialized firearms were used in crimes, including 325 homicides and attempted homicides. Because they are easy to make and assemble, and also can’t be traced, ghost guns have become the choice for criminals, extremists, gun traffickers, and others who are otherwise prohibited from buying guns. One man, whose family claimed he suffered from mental illness and was forbidden from obtaining firearms, ordered kits to build multiple AR-15 assault rifles. He proceeded to go on a deadly rampage at several locations, including an elementary school. A gunman in Baltimore also constructed an AR-15, which he used to shoot at four police officers.

Not long ago, only manufacturers like Remington, Glock, or Sig Sauer could manufacture firearms because the process required large, expensive machines and expert gunsmiths who knew something about weapons engineering. All of that has changed with the advent of 3D-printing technology. The types of weapons that can be created on a 3D printer vary widely. Some models require the purchase of metal parts, but others can be made almost entirely on a 3D printer.

In 2013, an open-source firm called Defense Distributed created “The Liberator,” a handgun completely made from plastic, save for one tiny nail used as the firing pin that can be purchased at any hardware store. The firm even made the blueprints available online. There was no law preventing this, and in fact, at the time 3D-printers were still relatively new and out of the price range for most people, so the issue didn’t register much. Yet later that year, another company, Solid Concepts, Inc. printed a handgun on a 3D printer capable of using metal. The following year, a machinist from Pennsylvania designed a 3D-printed plastic firearm that could withstand multiple rounds of firing.

However, most 3D-printed gun designs focus on the weapon’s lower receiver, as opposed to the entire gun. This way, people could just print the receiver and then buy the other parts, such as the metal barrel or stock, to complete the weapon.

Federal law only requires a background check if the gun has a lower receiver, which is the crucial component of the gun.

The receiver was also the only part of the gun that had to contain a serial number. Therefore, to circumvent the law, people would print the lower receiver and then simply obtain the other parts that could be purchased with no background check.

This became so common that gun groups circulated blueprints of how to print the lower receivers, while many gun dealers were happy to sell the kits needed for the remaining components to complete the build. All of this is perfectly legal according to federal law.

The Obama administration’s State Department stopped a libertarian activist, Cody Wilson, from publishing blueprints of 3D-printed weapons on the internet, and multiple courts ruled in favor of this policy.

However, once Trump came into office, that decision was reversed. In fact, Wilson said the Trump administration gave him “everything they wanted,” allowing Wilson to not only publish his blueprints, but reimbursing him $40,000 for legal costs.

Not long ago, 3D printers were out of the price range for most people, but cheaper equipment ($1,500) makes it much easier than it was even three years ago. Gun groups even offer guides to help get people started. In addition, advancements in both 3D printing technology and the strength of new plastics and polymers have made this form of weapon-making much easier and more accessible than ever before.

In fact, many people don’t even bother purchasing a 3D-printing machine. Several 3D-printing companies will do the work for you at the right price. Here in Florida, there are no regulations whatsoever regarding 3D-printed guns, so a 3D-printing manufacturer can build whatever you like.

Fernando Sosa is the owner of a 3D printing business here in Orlando whose work has appeared on MSNBC, CNN, and Late Night with Seth Myers, to name just a few. He told me he gets requests all the time to build 3D firearms. Although it would be lucrative, he refuses to do so out of principle. “The gun can explode and hurt the user; or the gun can be used to kill someone, or in a crime. I don’t want to deal with that kind of liability or guilt.”

Unfortunately, most manufacturers don’t have that kind of ethical concern. In fact, the decades-old Gun Control Act exempts people from making guns for their own personal use. Therefore, it’s up to the states to enact their own laws. However, most states have no prohibitions. Only nine states (California, Connecticut, Hawaii, Nevada, New Jersey, New York, Rhode Island, Virginia, and Washington) and the District of Columbia have specifically enacted laws regarding ghost guns. The state laws vary, and you can read them here. Most regulate the manufacture, sale, and possession of ghost guns, while D.C. and Rhode Island ban them altogether. New York banned guns that cannot be detected by security screening.

To his credit, President Joe Biden has taken this epidemic seriously. In April, he announced an executive action for the Justice Department to issue a rule subjecting ghost guns to the same requirements of the National Firearms Act. The Justice Department’s new rules require retailers to run background checks before selling kits, and now force manufacturers to stamp a serial number on each part of the firearm. This rule simply modernizes the definition of “frame or receiver” and helps close a regulatory loophole that had allowed unserialized, privately made firearms to be put into circulation.

Attorney General Merrick Garland acknowledged that this solves just “one aspect” of the problem, but it was a big step in the right direction. Yet even this small step has enraged Republicans. Thirty-seven Republican House members sent a letter to the Department of Justice and the Bureau of Alcohol, Tobacco, Firearms and Explosives (ATF) requesting the agencies rescind a proposed rule expanding the definition of what constitutes a firearm.

The representatives argue the rule pushes beyond the boundaries of the ATF’s authority, and hampers Americans’ Second Amendment rights as well as gun manufacturers’ ability to “innovate.” In fact, Republicans really don’t want to put anything on receivers, unless it’s a childish attack on Joe Biden.

Real reform would need to come from Congress, but don’t expect that to happen anytime soon. There are currently two firearm reform bills stalled that could make a significant difference. The first bill would require background checks for people who buy guns over the internet, at gun shows, and private transactions. This has been a decades-old legal loophole that has never been closed. The second bill simply expands the amount of time authorities need to complete background checks from three days to 10 days.

The NRA, predictably, called these bills “extreme gun control action.” They announced a $2 million campaign to fight these new rules, bills, and even the effort to just appoint a chief for the ATF. The last—and only—successful confirmation for the ATF was in 2013, the last time Democrats had control of the Senate and the presidency.

Law enforcement leaders who support the measures, including Cook County Sheriff Tom Dart, said states need to handle this problem on their own since changes at the federal level take a long time to enact. He asked that untraceable guns be outlawed in Illinois, and supports legislation recently introduced in the state senate to make it illegal to buy or sell ghost guns. Illinois currently has no prohibitions regarding ghost guns.

In Florida, state Sen. Linda Stewart pushed for legislation that requires 3D-printed guns to contain four ounces of metal, and prohibits use of polymers that can withstand pulling the trigger. These two requirements ensure that there is at least some metal in the gun, so the gun cannot go through metal detectors undetected. The federal Undetectable Firearms Act already makes these guns illegal to carry, but that law has long been outdated because there’s no prohibition in that law about building them. The decades-old law didn’t predict people would be able to print deadly weapons from a home printer. Unfortunately, the bill died because Stewart was unable to find a sponsor in the Florida House.

Stewart has recently filed a new ghost gun bill, SB 860, that codifies into state law that all firearms manufactured in Florida bear a unique serial number or identifying mark, along with another bill, SB 862, that pays for it.

In an email, she told me: “Ghost guns are undetectable and untraceable – meaning nearly anyone can gain access to a deadly firearm. This bill is about keeping guns out of the hands of people who shouldn’t have them.” She requires a sponsor in the Florida House.

With Republican obstruction, Democrats and victims have been forced to get creative, and they have with civil suits. In San Francisco last year, nearly 50% of guns recovered in homicide cases were ghost guns. California Attorney General Rob Bonta is joining a lawsuit brought by the city of San Francisco targeting three online sellers of “ghost guns.” The civil complaint claims GS Performance, Blackhawk Manufacturing Group, and MDX Corporation falsely told buyers that their kits were legal, and didn’t explain the requirements to apply for a serial number or complete a background check before selling the kits. This is required by California law.

Last February, Los Angeles sued Polymer80 over the deaths of three children, including Gracie Muehlburger, since the gunman used a firearm built from Polymer80’s branded parts in the shooting at Saugus High School. Polymer80 is also being sued by two Los Angeles County sheriff’s deputies who were badly injured in an ambush from a gun that was built from components from Polymer80.

So many things need to happen with filibuster reform, but one of the top priorities needs to be federal legislation that prohibits the unlicensed manufacture of firearms, as well as the requirement that all firearm precursors should be given permanently affixed serial numbers. A federal law will ensure that the protection won’t be reversed by a future, hostile administration to gun safety. In the meantime, states need to recognize this threat and step up. It’s an uphill battle in red states, but even blue-leaning moderate states have been slow to take action fighting Republican opposition to other gun safety laws such as “red flag” laws or assault weapons bans.

“My biggest concern is that the criminal element can mass produce unserialized, untraceable firearms. What concerns me is that technology has outpaced legislation.

This is not a Second Amendment issue. We have a healthy, robust legal firearms industry in this country. It’s a public safety issue.”

We have the tools to stop this epidemic from getting out of control, the question is whether we have the will. If past history on gun safety legislation is any indication, I wouldn’t get your hopes up.

If you live in Florida and have a democratic House representative, contact them to sponsor Senator Linda Stewart’s ghost gun bills: SB 860/862.

The 5900 Club and American Equine Awareness Seek Public Support for the ‘Save America’s Forgotten Equines Act’
Who funds the NRA?
When Seconds Count, the Police are Only Hours Away
A late word from Trump reframes CT GOP primary for U.S. Senate
Joe Biden’s worst gaffes of all time