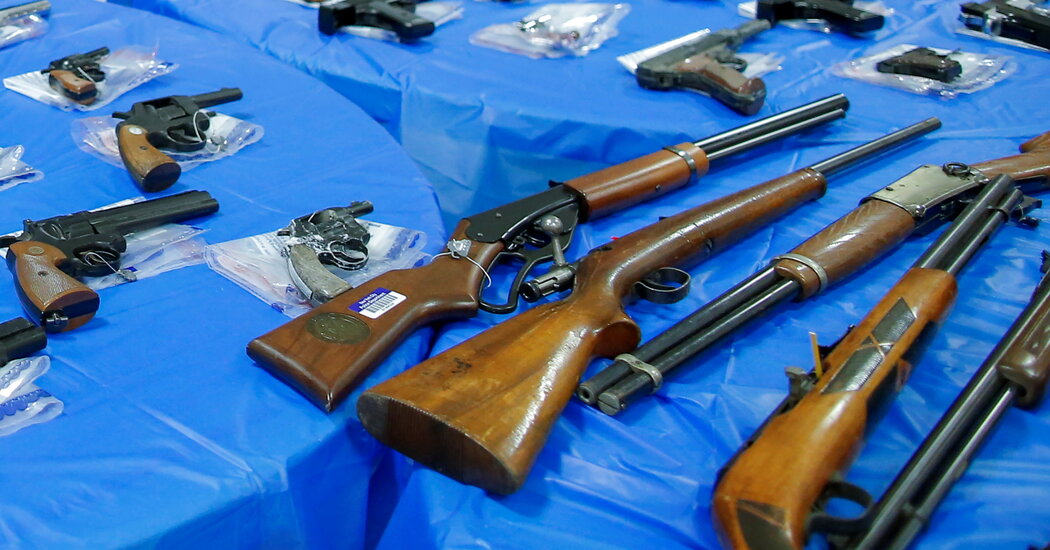 Americans are armed out of fear. But is that fear founded?

The Big Idea: How often are guns used in self-defense, really?

The Daily strives to reveal a new idea in every episode. Below, we go deeper on one of those from our show this week.

For years, the Rev. Rob Schenck was staunchly pro-gun rights — he even wrote a book connecting the Second Amendment to the Ten Commandments. But then he experienced a conversion at a hotel in Lancaster, Pa.

At an evangelical fund-raiser he was hosting in 2014, Schenck found himself alone with a friend, a fellow pastor from Florida. (Schenck asked not to share his friend’s name out of respect for his privacy.) As their conversation turned to the topic of gun violence, the friend lifted his sports coat to reveal a “Glock 9 millimeter on his belt,” and said, “I am never without this, it’s with me 100 percent of my waking hours, including when I’m preaching,” Schenck recalled. The friend added that if someone came in to attack his congregation, he’d “take him out from the sacred desk.”

Schenck inquired his friend about the hypothetical: But what if, in an effort to protect his congregation, he hit a child by accident? “He said, ‘I think that’s the risk we take when we defend those innocent people,’” Schenck remembered. It’s a risk that didn’t sit well with Schenck, who soon became an outspoken evangelical advocate for gun control.

The rationale that guns are needed for self-defense is pervasive. It’s why a majority of American gun owners say they’re armed, the defense that Kyle Rittenhouse has used in his homicide trial — and a concern cited by conservative Supreme Court justices currently considering the constitutionality of restrictions on carrying guns outside the home. But how often are guns used in self-defense, really?

“It’s pretty rare,” David Hemenway, director of the Harvard Injury Control Research Center, said, despite the fact that gun violence in the U.S. is exceptionally common. There are more guns in the country than people, and nearly 40,000 Americans died because of gun violence in 2019. A majority of those deaths were suicides. From 2007 to 2011, only about 1 percent of people who were crime victims claimed to have used a gun to protect themselves — and the average person had “basically no chance in their lifetime ever to use a gun in self-defense,” Dr. Hemenway told NPR in 2018.

Still, there are a few reasons getting exact numbers on the prevalence of what researchers call “self-defense gun use” is tricky. A study cited by the C.D.C. indicates a “range of 60,000 to 2.5 million defensive gun uses each year.” A large majority of firearms researchers, however, “think that’s a wild overestimate for two reasons,” Dr. Hemenway said. First, survey respondents are often shown to report the timing and frequencies of events inaccurately, a phenomenon known as the telescoping effect.

Additionally, people involved in gun violence often claim self-defense, even if the facts of the case don’t support that claim — a self-presentation bias that can make data unreliable. And when trying to measure rare events, any margin of survey error can create huge variables in the results.

Conservative proponents of gun rights often cite the higher end of the estimated range as evidence of prevalent “positive” gun use. “These studies don’t deter the simple fact that a gun in the hands of a good person can save lives,” said Amy Hunter, director of media relations at the National Rifle Association.

Although these stories often make headlines, experts say they are outliers — and note that the presence of a gun increases the risk of a fatality. Homicides are 6.8 times more common in states with the most guns versus those with the least, and access to a gun triples the likelihood of death by suicide.

So while Americans continue to arm themselves out of fear, a criminologist in Britain suggests a different approach.

Erin Sanders-McDonagh, a senior lecturer in criminology at the University of Kent in Canterbury, said that while parents at her son’s school in London “are terrified of their kids getting mugged,” the answer wasn’t to arm themselves or their kids in a city where knife violence was common.

“I see them putting their kids in taxis, finding alternative routes of getting them around London, making sure they go out in groups or using technology to make sure that they’re safe,” Dr. Sanders-McDonagh said. “The response isn’t to send them out with a machete and hope that they’re going to come back OK.”

Listen to our episodes about gun control to learn more.

Behind the music for the Mediterranean

On Wednesday’s episode, we heard the story of Martín Zamora, the owner of a funeral parlor in Algeciras, Spain, who has taken on an unusual line of work: He is committed to identifying the bodies of migrants who have washed up on shore, and then getting their bodies back to their homes so that they can be buried.

The producer Rachelle Bonja, along with our audio fellow Chelsea Daniel, created some of the original music for the episode. Below, you can take a closer listen to two of their songs:

When Rachelle told me about this episode she was producing, I was struck by her descriptions of Martín: a 61-year-old man who is always wearing a suit, and whose job is to rescue the bodies of drowned migrants. Martín is often the last person in contact with the migrants before they are returned to their families. With this in mind, I wanted to write a song that combined elements of the water where the migrants are found with a melody that represents the somberness of Martín’s daily work.

The piece is underscored by an ambient drone that sounds like water bubbling. I wanted the music to feel both reflective and warm, so I incorporated an arpeggiated mandolin line anchored by a bass. It becomes more prominent in the middle of the piece and then disappears back into the texture of the ambient drone. — Chelsea Daniel

I wanted to make a piece for Achraf Ameer, a 27-year-old from Morocco, who had been missing for weeks before Martín reached his family. This piece is dedicated to Achraf — and to all the people who take this very dangerous journey across this sea border in search for a better life.

I was inspired by Kaori Muraji’s rendition of “Gnossienne No. 1” by Erik Satie, because it perfectly strikes a balance between hope and melancholy — a tension that felt present in Achraf’s tragic journey. I also wanted to represent the Mediterranean, a sea that I have a strong personal connection to and that is the heart of this story. I included a moving harp line to echo the sound and quality of its waves — always flowing, transporting people far from home, and the site of many emotional journeys.

It’s a strange feeling to write music for people who will never hear it. I hope that in telling Achraf’s story — and trying to grasp the emotional toll of migration across the sea — we can translate the experience for the part of the world that lives far from it. — Rachelle Bonja

On The Daily this week

Monday: A Supreme Court case that could transform America’s relationship with guns.

Wednesday: The story of Martín Zamora: When migrants die at sea, he gets them home.

Thursday: A Times investigation found that 100 new laws have been passed that wrest power from public health officials. How will this affect America’s response to a future pandemic?

Friday: Are we at the end of the pandemic? We ask Dr. Anthony S. Fauci.

That’s it for the Daily newsletter. See you next week.

Have thoughts about the show? Tell us what you think at thedaily@nytimes.com.

Were you forwarded this newsletter? Subscribe here to get it delivered to your inbox.