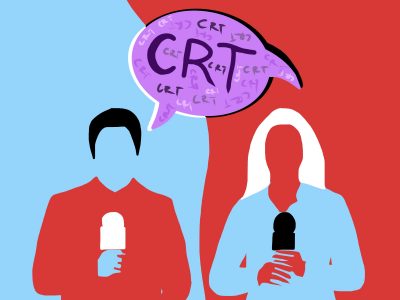 He believes that Biden is the legitimate President, he spoke out against the Texas abortion bill, he isn’t endorsed by the National Rifle Association and he’s a supporter of the COVID-19 vaccine.

But where Glenn Youngkin falls back into line with his party brethren is his promotion for The United States’s ongoing culture war. Youngkin planted his flag deep into the critical race theory debate and rode it to the Governorship.

Exit polls by NBC News found that this issue had galvanized not only his supporters but also those of his Democratic opponent Terry McAuliffe. When voters were asked “how much say should parents have in curriculum,” 94% of Youngkin’s voters responded “a lot/some,” and 74% of McAuliffe’s did as well. According to a tweet by NBC News political reporter Josh Kraushaar, 53% of overall voters said parents should have “a lot” of say in their children’s education.

Youngkin succeeded in turning a non-issue into the issue. Critical race theory is not taught at most levels in Virginia, it’s not mentioned in the state’s Standards of Learning and McAuliffe was not advocating for it to be adopted. Despite this, Youngkin declared over and over again that critical race theory was creeping into Virginia’s schools.

At a rally July 9, he told a crowd of supporters that critical race theory had “moved into all of our schools.”

In an appearance July 23 on The Hugh Hewitt Show, a conservative radio talk show, Youngkin said, “we’re actually watching this critical race theory move its way into all schools across Virginia.”

And in an A appearance on Fox News, Youngkin hammered the point away again, saying “critical race theory has moved into our school system, and we have to remove it.”

All of this was false. But in the world we currently live in, it’s not the validity of a statement that makes something true. It’s the number of times you say it.

The media then pulled McAullife into this, asking him to clarify his stance on something he doesn’t stand for on a problem that doesn’t exist.

When asked about the subject on an Oct. 10 appearance on CNN, McAuliffe said, “Let’s just be clear. We don’t teach critical race theory. This is a made-up … plan to divide people. I try to unite people.”

The usual suspects — CNN, MSNBC and Fox News — rely on these culture war issues to drive ratings. A Media Matters report found that Fox News aired “nearly 100 segments” on critical race theory in Virginia from March to June 2021. To a lesser extent, CNN also played a part in legitimizing this conflict by asking McAuliffe about the issue and devoting segments and panel debates to the topic.

What’s so strange about critical race theory is it exists in greater numbers in the minds of paranoid Fox News hosts than it does in classrooms. Like conservative boogeymen of the past, like Biden banning meat, their only relevance is gifted to them by the right constantly bringing them up.

The mainstream media then joins the party to legitimize the concerns. In the same way the many cable channels aired former President Trump’s rallies, when an outlet like the New York Times or CNN address these stories, they give something of little consequence more oxygen.

Most Americans don’t even know what critical race theory is, according to an Economist/YouGov poll that found only 35% of respondents believe they have a “good idea of its meaning.”

So why then, in a state that doesn’t teach critical race theory and in a country that doesn’t really even know what it is, do we talk about it ad nauseam?

Because they want us fighting over it.

The more time we, the American electorate, spend squabbling about critical race theory the less time we wonder what our elected representatives, both Republican and Democrat, are actually doing to quell racial inequality in this country.

The more we hate others — based on who they voted for, what deity they choose to believe in, what skin color they have or who they love — the more we vote for the politicians who seek to divide us.

It’s the job of the media to stand above the fray and defend the electorate from the malarkey being thrown down from Washington. But today, many news outlets seem to just act as a bullhorn for these politicians and their divisive language.

In the 1950s, when the legendary NBC anchor Edward R. Murrow reported on Joseph McCarthy’s actions in Congress during the Red Scare, he called McCarthy out for his actions at the helm of the House Committee on Un-American Activities In the process of reporting on the subject, Murrow didn’t give McCarthy an outlet to spew misinformation. Murrow inserted his opinion when it was needed, not when financially advantageous for him and the network.

Renowned CBS News anchor Walter Cronkite once said “the democratic system is challenged by the failure in television because our evening news programs have gone for an attempt to entertain as much as to inform in the desperate fight for ratings.”

If the motivations of the mainstream media are ratings-based instead of information-based, their audiences falter and in turn, our democracy falters. Virginia’s gubernatorial race may be the latest example of this phenomenon, but it likely will not be the last as long as corporate interests outweigh the duty to inform in newsrooms around the country.