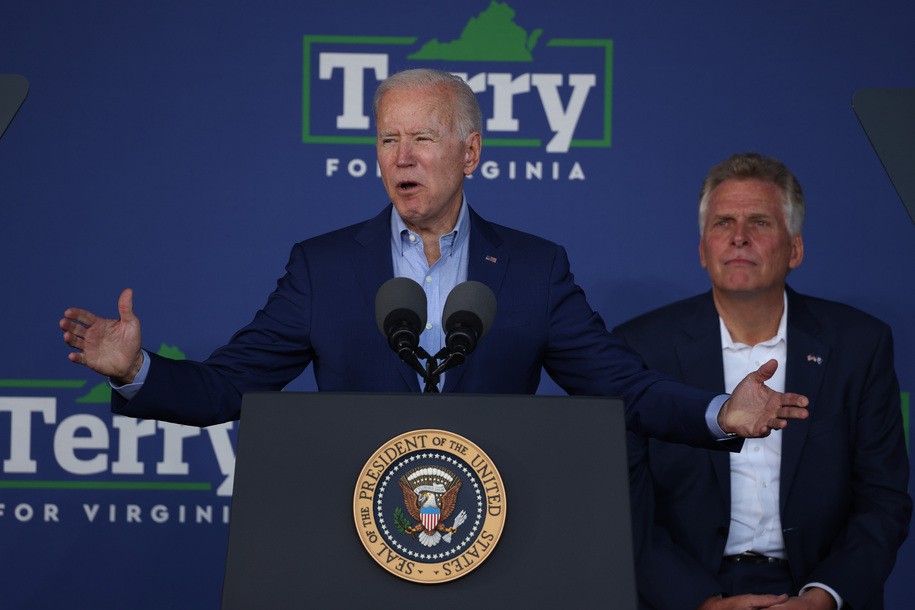 As the executive director of Everytown for Gun Safety, he took on the National Rifle Association and helped make gun violence a winning issue.

Past Democratic and Republican administrations have failed to secure such an infrastructure deal despite growing calls for action from labor leaders, the business community and experts alarmed by degrading public works. Trump had long talked about passing a massive infrastructure package, but his advisers never coalesced around a strategy and “Infrastructure Week” became a running joke among his aides. While those efforts languished, infrastructure problems grew, with the United States eventually ranking behind a dozen other developed countries, raising concerns about safety and the economic competitiveness of the country.

Jayapal on why progressives chose pragmatism: ‘We need to keep our eyes on the prize’

That’s not the role ideological factions within Congress typically play.

I think it’d be a good idea for reporters to include how they found their interviewees, especially when they’re supposed to represent a larger group like “white moms,” or “independent voters” or some such. Always a fan of showing your work but would also solve a lot of problems.

In nearly every statement other than Biden’s, and in many news reports on the matter, the OSHA rule was described as a “vaccine mandate.” But this is not actually correct. The new rule is better understood as a testing mandate with a vaccine exception—and that distinction could be crucial as it works its way through courts of law and public opinion.

What did OSHA actually do? The agency unveiled what is known as an “emergency temporary standard,” or ETS, on Covid-19 vaccination and testing for most companies with more than 100 workers. The ETS is roughly 490 pages long, with fewer than two dozen pages dedicated to the rule itself and the rest devoted to its justification. It requires eligible companies to do a few things to make vaccinations easier for their employees to obtain: provide paid time off so workers can get vaccinated and recover from any side effects, maintain lists of which workers have already been vaccinated, establish a notification system for workers who test positive, and other administrative requirements. It also generally requires employers to tell unvaccinated employees to wear masks.

a lot of GOP anger this morning over Rs helping Biden get infrastructure victory.
— they couldn’t hold the yes votes to 2 or fewer. Just was impossible.Kinzinger, reed, gonzalez were probably always yes.
— some of these yes votes help Rs back home. van drew and malliotakis

My unofficial count was 7 Republicans from the Problem Solvers caucus who voted for the bill (out of 13 total R votes). They may actually have solved a problem for once.

A bitter feud has divided Dems in a key swing state — and dragged in the national party.

The Nevada feud, which erupted earlier this year when insurgent Sanders supporters took over the state party from allies of the former Senate majority leader, has spiraled into a flurry of resignations, embarrassing headlines and the creation of a fully operating shadow party.

Great. Exactly what we needed.

Biden has now done two big things Trump wanted to, passed a bipartisan infrastructure bill and gotten out of Afghanistan. I don’t think a lot of people will spin it that way though.

It’s past 5pm on a Friday, so I’ve cracked a beer and started reading the reconciliation bill. It starts with the U.S. Forest Service, and I already like this thing rules.house.gov/sites/democrat…

Substantial civil penalties for unfair labor practices! That would be a game changer.

Expected stuff about child care, elder care, workforce development … and I guess here’s the climate conservation corps at $6.9b, lower than the $10b Biden asked for.

Couple billion for replacing super-polluting heavy-duty vehicles with cleaner ones would super-charge efforts to clean up ports in particular:

Joe Manchin Might Be a Sentient Brick of Coal, but There’s Still a Chance Democrats Will Pass a Decent Climate Plan

In the end, the Biden administration appears to have little choice but to cave on Manchin’s demands. As one of the party’s 50 votes in the Senate, he technically has the same power as any other Democrat to single-handedly veto the White House’s climate and social spending agenda. But as a moderate from a state practically synonymous with coal mining who has just spent months staring down the rest of his caucus, Manchin can actually lob a credible threat to walk from negotiations if he doesn’t get his way. Just on Wednesday, a thinly sourced rumor that he was planning to potentially switch parties managed to devour a whole news cycle. Manchin called it “bullshit”—but the attention it generated was nothing if not a sign of the power that Mr. Bituminous wields during these talks.

All of which raises a question that’s confounding some progressives: Can Democrats still produce a decent climate bill without crossing any of the red lines Manchin has drawn? Thankfully, the answer may be yes. It will no doubt be disappointing and less ambitious than what the ecological catastrophe we’re facing calls for. But the proposals that are still in play, particularly a massive load of tax credits for renewable energy and electric vehicles, could make unprecedented and meaningful progress toward curbing emissions. Even after the cuts Manchin has demanded, “you’d still have the single biggest action to target climate change that the government has ever done,” John Larsen, an analyst specializing in clean energy policy and markets at the Rhodium Group, told me.

About the newest Good Republican.

So why not Youngkin? What makes him dangerous?

All politicians tell lies. It’s part of the job. Donald Trump was never going to build The Wall. Joe Biden was never going to create a public option. Overpromising and underdelivering is a normal—if regrettable—feature of American politics.

What marked Youngkin as still being part of the sickness that has infected the Republican party was his refusal to admit to basic, irrefutable facts concerning the 2020 election. These were not matters of opinion or preference, but raw facts of life. Donald Trump lost the 2020 election. By quite a lot. The election was free and fair. Period. The end.

Glenn Youngkin danced around this fact for a very long time. Then he tried to finesse it. Then he backed away from it again.

What this revealed was that Youngkin was not willing to say that 2+2=4. And that if his voters demanded that he pretend that 2+2=🍌, then he would do it.

Fwiw – when I interviewed @PhilMurphyNJ on Wednesday night he credited BBB-like polices he enacted in NJ (childcare, preK, expanded EITC) as giving him a backstop & helped to turnout dem voters.