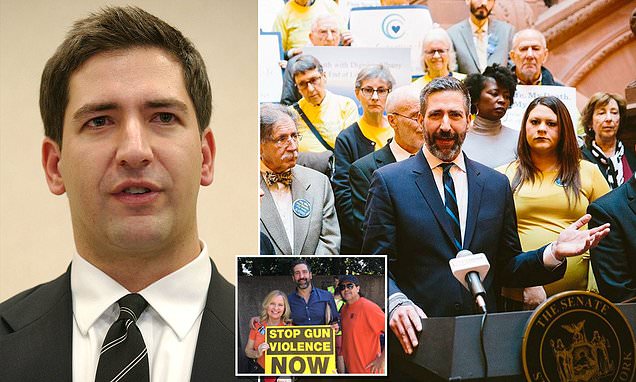 Poster boy for U.S. gun control movement kills himself in jail on DUI charge: Mark Glaze, 51, who helped Obama write policy and took on NRA ‘was suffering from depression’

By Alastair Talbot For Dailymail.Com 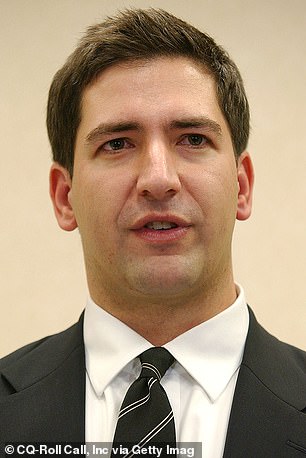 Mark Glaze, 51, was once referred as ‘the face of the gun control movement’ by the WSJ after the Sandy Hook Elementary School shooting in 2012

A campaigner credited with helping found the modern gun control movement has killed himself in jail while being held on a DUI charge.

Glaze, a father-of-one, is said to have been suffering from addiction and severe depression in the period leading up to his arrest and death.

‘As we celebrate the life of our beloved Mark, we would be remiss not to mention his harrowing struggle with alcohol, depression, and anxiety,’ a Facebook statement said.

‘In the last years of his life, Mark actively sought help. He completed several treatment programs, with the hope of finding peace and breaking free of the addictive cycle that caused him to feel so desperately alone and in pain. … We pray that by being open about Mark’s cause of death, something positive may emerge from our devastating loss.’

Glaze was being held at Lackawanna County Prison after his arrest on September 9th for fleeing the scene of a car accident in Dunmore, Pennsylvania. Police charged him with DUI, accidents involving deaths or personal injury, abandoning a vehicle on the highway and careless driving, according to court documents.

Glaze grew up in Colorado – with his father a hunter who was a member of the National Rifle Association. He qualified as a lawyer, and joined campaign group Mayors Against Guns in 2011 as a consultant, working alongside luminaries including Michael Bloomberg.

His campaigning intensified in the wake of the 2012 Sandy Hook Massacre, which saw 20 kids and six adults shot dead at a Connecticut elementary school. The gun safety advocate was gay, and drew inspiration for the battle to overturn the Supreme Court’s ban on same-sex marriage during his gun safety efforts. 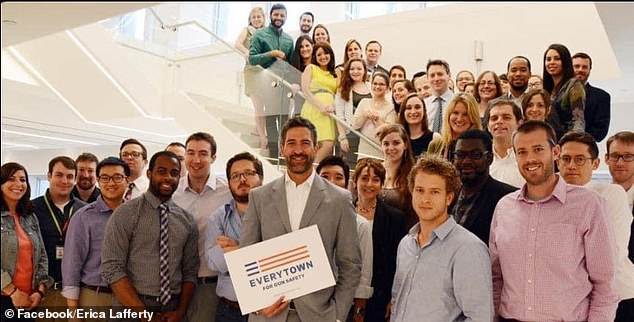 As the executive director of Everytown for Gun Safety (pictured), he took on the National Rifle Association and helped make gun violence a winning issue

Glaze provided blueprints for then-President Barack Obama’s proposed reforms, which sought to ban assault weapons and expand background checks. But the bill was gradually killed by pressure from Democrat and Republican senators who feared upsetting the National Rifle Association.

He was credited for inspiring protests against and boycotts of the NRA, which have been credited for plunging the organization into ongoing chaos.

Highlighting a long career of public service, Glaze served as an advisor to the Commission on Federal Election Reform led by former President Jimmy Carter and former Secretary of State James Baker.

He also worked as a consultant for the Raben Group, a D.C.-based public affairs firm that tacked some of the toughest social issues in the US, including gun control.

Prior to beginning his consulting practice in June 2014, Glaze served as executive director of Everytown for Gun Safety, the largest gun violence prevention group in the county chaired by former New York City Mayor Michael Bloomberg. 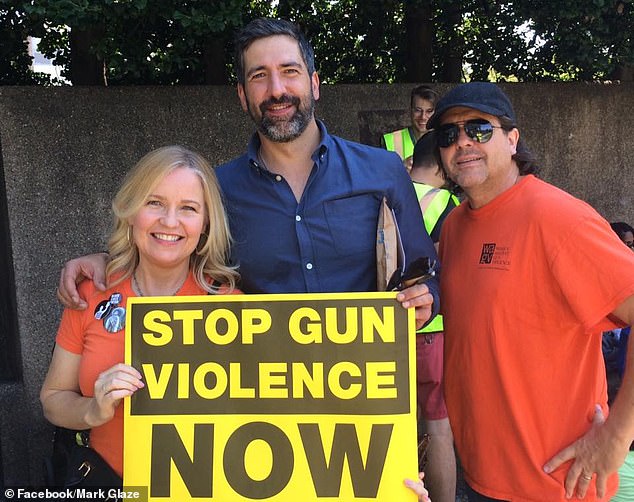 Glaze (center) opened his own consulting practice after years of advocating for gun-control. He was took other issues to heart, including campaign finance reform, government ethic and LGBTQ rights

He was also an advocate of campaign finance reform, government ethics and LGBTQ issues and was hired by the Human Rights Campaign in 2010 to push the Senate to repeal legislation on the ‘Don’t Ask, Don’t Tell’ policy.

According to the Wall Street Journal, after the Newtown mass shooting, Mark became ‘the face of the gun control movement.’

In a 2014, Glaze said the US was ‘at a tipping point’ following schools shootings like the one at Sandy Hook Elementary School in Newtown, Connecticut, in which 20 children and six school officials were killed.

‘And, you know, the kids who were shot and murdered were my son’s age, and it was right before Christmas. So, I think that combination of things has just got the public and the president ready to say, ‘Enough is enough, let’s finally get this right.” 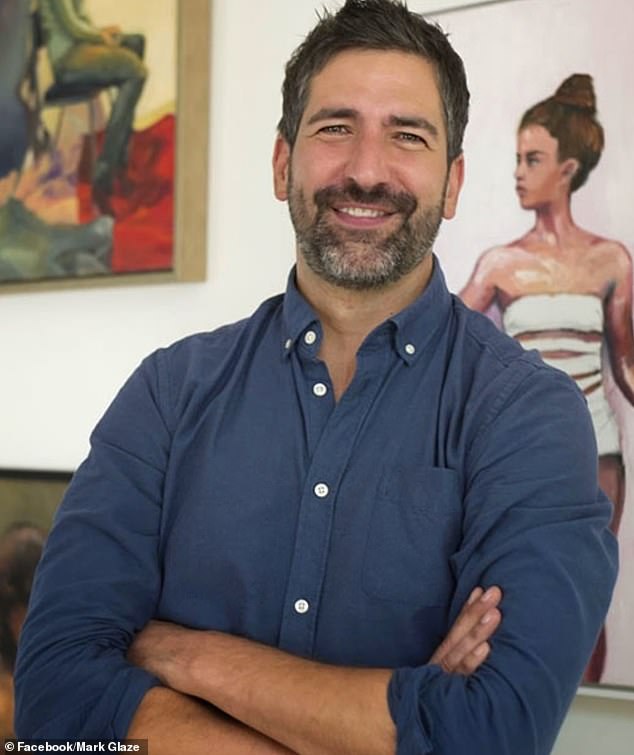 Glaze, who was gay, is survived by his 14-year-old son, Archer; aunts, uncles, cousins and a wide circle of friends in D.C. and beyond 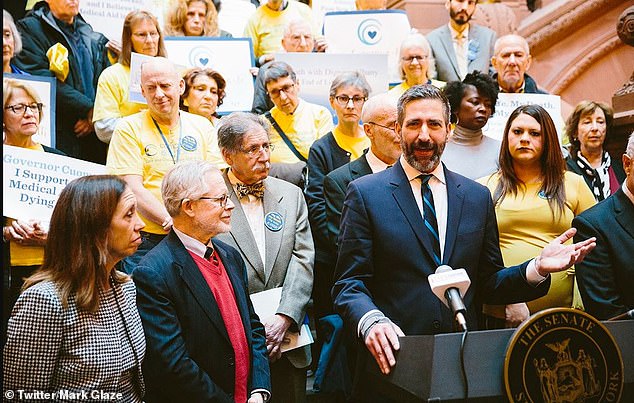 Mark Glaze, a gun safety advocate, was widely considered a founding figure in the modern gun-control movement. His long career in public service included working for Mayors Against Illegal Guns, an organization that was founded by Michael Bloomberg as a coalition of 15 mayors

Glaze’s father, Mark Charles Glaze, was part of the N.R.A. and and owned a gun store in Colorado, while his mother, Nancy Green, was a homemaker.

‘If you had told me when I was growing up in the mountains of Colorado, shooting guns on the weekend with a dad who is an N.R.A. member and a gun dealer, that The Wall Street Journal would call me the face of the gun control movement, I’m not sure I would have believed you,’ Mr. Glaze said in a video he made for Colorado College, his alma mater. He later went on to study law at the George Washington University Law School.

‘We are unbelievably proud of Mark’s leadership; he has enormous responsibility and meets it well, with vision and delivery,’ Raben said. ‘That he is an openly gay man helping lead such an important effort is a tribute to his professionalism, and how the country and its understanding of our talent has changed.’

Glaze, who was gay and a prominent campaigner for LGBT rights, is survived by his 14-year-old son, Archer; aunts, uncles, cousins and a wide circle of friends in D.C. and beyond.