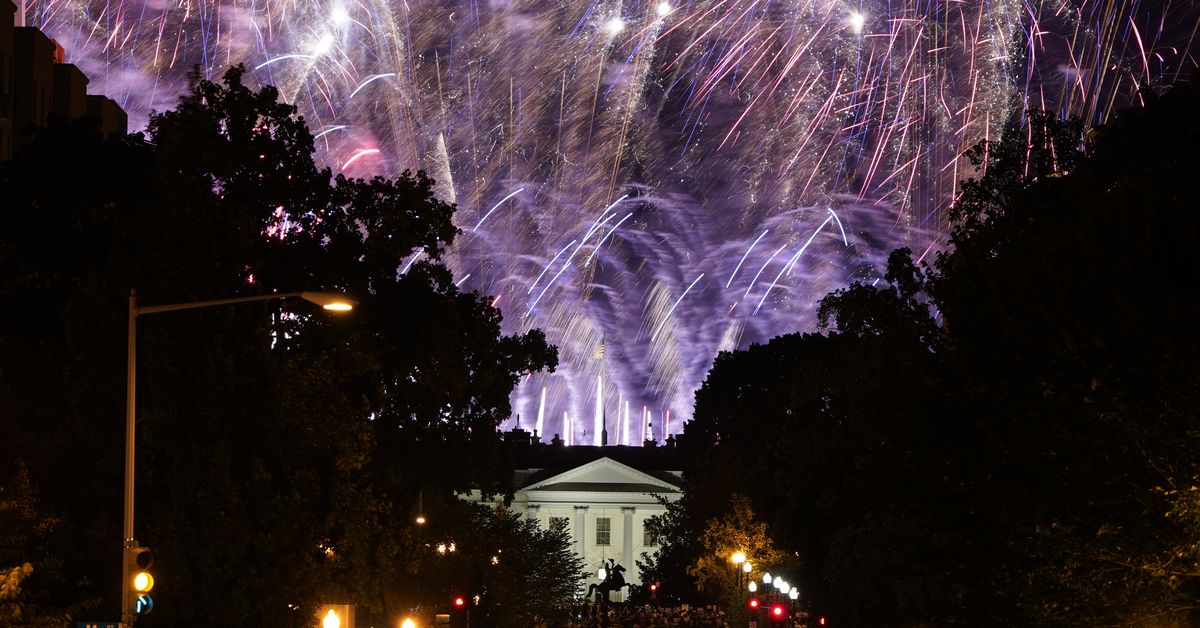 A recent video from Rep. Marjorie Taylor Greene, the notoriously polemical GOP congresswoman, made waves across social media. In the ad, Greene stepped out of a Humvee, donning boots, aviator glasses and an army-green jacket, and lifted up a military grade Barrett M82A1 sniper rifle.

“Joe Biden armed an Islamic terrorist nation with $83 billion in weapons, like this one,” she said, critiquing the United States’ withdrawal from Afghanistan. “Now I’m doing a gun giveaway of my own, but for Americans only.”

Interested viewers could enter a raffle to win the gun by visiting GreeneGun.com. But first, Greene showed off its power. “I’m going to blow away the Democrats’ socialist agenda,” she said, then aimed the sniper at a Toyota Prius in the distance — with the word “socialism” painted on its side.

Three different camera angles were shown of the massive explosion, a giant combustion of smoke, fire and metal.

The video’s incendiary nature is seemingly on par for Greene, a conservative firebrand herself. But explosions, guns and ammo are gaining traction beyond Greene. Other conservatives seeking election in state and national races have employed the tactic, too. As midterm elections approach, Second Amendment rights and an appetite for combustion may play a central role.

Nevada gubernatorial candidate Michele Fiore, who champions her title as the “female Trump,” recently released a campaign video in which she introduces her “three shot plan.” In subsequent clips, she unholsters a pistol and shoots beer bottles labeled “vaccine mandates,” “voter fraud” and “CRT.” The video closes with her saying, “I’m Michele Fiore, and I’m ready for the fight,” as she grabs the pistol on her hip.

Arizona gubernatorial candidate Kari Lake, a former host on a local Phoenix news station, promises to take “a sledgehammer to leftist lies and propaganda.” In a TV ad, she does just that, smashing TVs with a sledgehammer as the faces of CNN’s Don Lemon, Chris Cuomo and others appear on the screens.

Three days before the Jan. 6 Capitol attack, newly elected Rep. Lauren Boebert, R-Colo., released a three-minute ad explaining why she would “carry (her) glock to Congress.” Firearms are banned on the House and Senate floors; a week later, Boebert caused a holdup for setting off a metal detector while entering the U.S. Capitol and refusing to turn her bag over to security for inspection.

Idaho Lt. Gov. Janice McGeachin, who is running for governor in 2022, appeared in an ad produced by Idaho Freedom Foundation “reaffirming” her “commitment to freedom.” She held a Bible while discussing Americans’ “inalienable rights,” including “securing safety,” at which time she placed the gun on the book.

Several other campaign ads or promotional videos — including Rep. Dan Crenshaw, Georgia Gov. Brian Kemp and several others — feature guns, weapons, explosions or some combination of it all.

The increase of firearm use in campaigning may be a result of perceived attacks on gun rights by the Biden administration. In April, after mass shootings in Atlanta, Boulder, Colorado and elsewhere, President Joe Biden declared gun violence a “public health endemic” and introduced a half-dozen executive orders to reduce firearm-related deaths. In June, Biden announced a comprehensive strategy to combat gun violence.

Still, the president’s actions fell well short of the gun control proposals of his campaign. Biden’s platform included one of the most ambitious gun control proposals in history, including banning the import of assault weapons and implementing a gun buyback program. Those proposals have not found success in Congress.

Meanwhile, Americans are increasingly open to violence as a form of political action. A study from earlier this year found that one-third of Americans agreed with the statement “The traditional American way of life is disappearing so fast that we may have to use force to save it.” And nearly one-third of Republicans say that they think violence may be necessary to “save our country,” according to a separate poll by the Public Religion Research Institute. Only 11% of Democrats and 17% of independents agree.

An increase of firearms and flare-ups in campaign commercials may be the result of Second Amendment concerns. But it may not be necessary for successful GOP campaigns, as evidenced this week. Glenn Youngkin, who on Tuesday became the first Republican to win a Virginia gubernatorial election in over a decade, was not endorsed by the NRA, but notably distanced himself from discussing guns toward the end of his campaign. Further, he publicly denounced the Jan. 6 attack on multiple occasions and called the riot “sickening and wrong.”