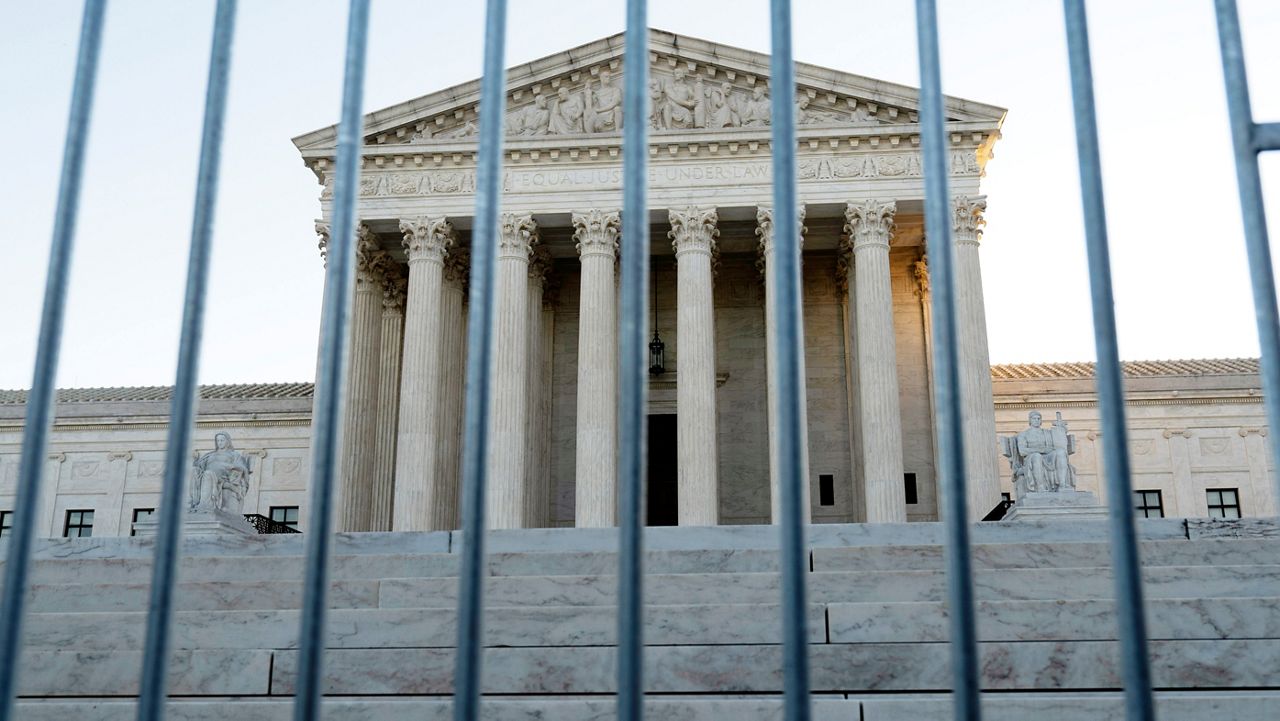 Just days after hearing arguments in cases against Texas’ controversial abortion law, the nation’s highest court will turn its attention to another hot-button issue: Gun rights.

The Supreme Court on Wednesday heard arguments a challenge to a New York law which imposes restrictions on carrying firearms outside of the home. Under the state’s “proper cause law,” gun owners in the Empire State must show “proper cause” — a demonstrable, concrete need for self-protection beyond a general desire for self-defense — in order to get a license to carry a concealed, loaded firearm.

Several other states, including Hawaii, California, Massachusetts and New Jersey, have similar laws on the books.

The question on the table in the case, New York State Rifle & Pistol Association, Inc. v. Bruen, is: “Whether the state’s denial of petitioners’ applications for concealed-carry licenses for self-defense violated the Second Amendment”

Attorney Paul Clement, the former U.S. solicitor general under George W. Bush, argued on behalf of the two individuals who were rejected for concealed carry permits due to not showing “proper cause.”

Clement opened his arguments by asserting that the New York law aims to “convert a fundamental constitutional right to a privilege.”

Clement sought to compare getting a concealed carry permit to the process of obtaining a hunting license.

“One way to think about it is we’re asking that the regime work the same way for self-defense as it does for hunting,” he said, adding: “When my clients go in and ask for a licensed concealed carry for hunting purposes, what they have to tell the state is they have an intent to go hunting. They don’t have to say: ‘I have a really good reason to go hunting.’ I don’t have to say: ’I have a better reason to go hunting than anybody else in my general community.’”

“The difference of course, you have a concealed weapon to go hunting, you’re out with an intent to shoot say a deer or rabbit which has its problems,” Clement said, adding that “you want to carry a concealed weapon” when carrying a gun for self-defense.

Chief Justice Roberts questioned Clement on where guns could be prohibited, asking: “What sort of place do you think they could be excluded from? Any place where alcohol is served?”

Clement replied that bars “might be a tougher case for the government,” but schools and government buildings would be prohibited. He also conceded, in questioning from Roberts, conservative Justice Amy Coney Barret and liberal Justice Elena Kagan, that guns in New York’s Times Square on New Year’s Eve, college campuses, Yankee Stadium and the city’s subway system might also be off-limits.

“If you concede, as I think the historical record requires you to, that states did outlaw guns in sensitive places, can’t we just say Times Square on New Year’s Eve is a sensitive place because now we’ve seen you know, people are on top of each other?” Barrett said. “We’ve had experience with violence. So we’re making a judgment it’s a sensitive place.”

Liberal justices seemed to signal allowing New York’s law to remain in place, highlighting differences between more densely populated cities and suburbs and rural areas. Some conservatives, however, were sympathetic to the challenge from the two men from rural parts of the state.

“I think that people have good moral character that start drinking a lot and may be there for a football game or some kind of soccer game can get pretty angry at each other,” Breyer said. “And if they each have a concealed weapon, who knows?”

“There are plenty of statistics in these briefs to show there’s some people who do know and a lot of people end up dead,” Breyer continued. “So what are we supposed to do to sort of float around like with NYU and say, ‘hey, oh, this is the rule. It seems to work out in upstate New York.’ We don’t know of course, and we do know that your client is carrying a concealed weapon because he has a right to in some instances, and even following Heller and following the history, which I thought was wrong.”

“What are we supposed to say in your opinion, that is going to be clear enough that we will not produce the kind of gun-related chaos?” Breyer added.

New York Solicitor General Barbara Underwood, who is arguing in defense of the law, saying that the state “is not an outlier in the extent to which the state restricts the ability to carry firearms in public” and the restriction “fits well within that tradition of regulating public carry.”

The court’s conservative justices grilled Underwood about the differences between how the law impacts people in rural and urban communities differently.

“It’s one thing to talk about Manhattan or NYU’s campus,” Justice Clarence Thomas, a conservative, said. “It’s another to talk about rural Upstate New York.”

Underwood replied that such permits are more “readily available” in rural areas of the state, and decisions to issue them are left to local officials.

Two of the court’s conservative justices, Samuel Alito and Brett Kavanaugh, suggested that the state should not question whether or not people believe they are in danger.

“Why isn’t it good enough to say I live in a violent areas and I want to be able to defend myself?” Kavanaugh asked, while Alito brought up people who work late hours, like nurses and janitors, might want to carry a firearm.

Underwood said that the case is not based on those merits, and should be remanded to a lower court if those questions wanted to be raised.

In his closing arguments, Clement said that the state should not “put a cap on the number of firearms,” nor should it deny a New Yorker the right to carry a concealed firearm for protection because they happen to live in a highly populated area.

“The only difference you really see is that people who have a handgun for self-defense end up with a better outcome,” Clement said. “They’re not shot. They’re not made victims.”

A ruling in the case is expected next spring.

With the high court in a position of a 6-3 conservative majority, in part thanks to former President Donald Trump adding three justices in his single term as president, gun rights advocates are hoping the court will rule that the New York law, and others like it, are too restrictive.

New York Gov. Kathy Hochul said in a statement that she hopes the court upholds the law, touting that the state “is a national model for the strongest gun safety laws

“My hope is that the Supreme Court upholds our state’s common-sense law that requires ‘proper cause’ for issuing concealed carry pistol permits,” Hochul wrote in a statement. “Having more armed people in public places doesn’t make us any safer.”

The case is the first major Second Amendment question before the high bench in more than a decade. The landmark 5-4 decision in 2008’s District of Columbia v. Heller held that individuals are guaranteed the right to keep a gun in their home for self-defense.

But apart from a 2010 case — McDonald v. City of Chicago, which found that the right to “keep and bear arms” is incorporated against states thanks to the Due Process Clause of the Fourteenth Amendment — the court has largely avoided the prickly issue of the Second Amendment, a point of contention for many gun rights activists, and even among some of the justices themselves.

“The Second Amendment is a disfavored right in this court,” Justice Thomas wrote in 2017, joined by Justice Gorsuch, a Trump appointee, when a petition to hear a gun rights case was denied.

“For those of us who work in marbled halls, guarded constantly by a vigilant and dedicated police force, the guarantees of the Second Amendment might seem antiquated and superfluous,” Thomas continued. “But the framers made a clear choice: They reserved to all Americans the right to bear arms for self-defense. I do not think we should stand by idly while a State denies its citizens that right, particularly when their very lives may depend on it.”

The other two Trump appointees — Justices Barrett and Kavanaugh — previously signaled that the high court should rule on the Second Amendment.

In 2011, as an appeals court judge, Kavanaugh argued in a dissent that the District of Columbia’s ban on semi-automatic rifles and its gun registration requirement were unconstitutional. Last year, he urged the court to take up another guns case soon, saying he was concerned that lower courts were not following Supreme Court precedent.

Barrett, as an appeals court judge, wrote in a dissent that a conviction for a nonviolent felony shouldn’t automatically disqualify someone from owning a gun; she said her colleagues were treating the Second Amendment as a “second-class right.”

New York State requires citizens to “demonstrate a special need for self-protection distinguishable from that of the general community or of persons engaged in the same profession.” The law has been in place since 1913.

But the two private citizens who were denied licenses sued, writing in a legal brief that New York “makes it effectively impossible for an ordinary, law-abiding citizen to obtain a license to carry a handgun for self-defense.” They are joined in the case by the New York State Rifle & Pistol Association, which is affiliated with the National Rifle Association, the powerful gun lobby  which is also backing the challenge.

Gun control groups hope, however, that conservatives might still vote to uphold New York’s law. A group of prominent conservatives, including former federal appeals court judge J. Michael Luttig, has urged the court to do so in a brief to the court.

Eric Tirschwell, the legal director at Everytown for Gun Safety, said there’s “reason to be concerned” for groups like his that “a type of law that the court was not interested in or willing to review in the past, they now are.”

“The stakes really could not be higher,” said Jonathan Lowy, chief counsel at the gun control group Brady.

There is precedent to uphold the law, even among prominent conservatives: Earlier this year, in a 7-4 decision, judges on the 9th U.S. Circuit Court of Appeals rejected a challenge to Hawaii’s permit regulations. Conservative judge Jay Bybee wrote that a “review of more than 700 years of English and American legal history reveals a strong theme: government has the power to regulate arms in the public square.”