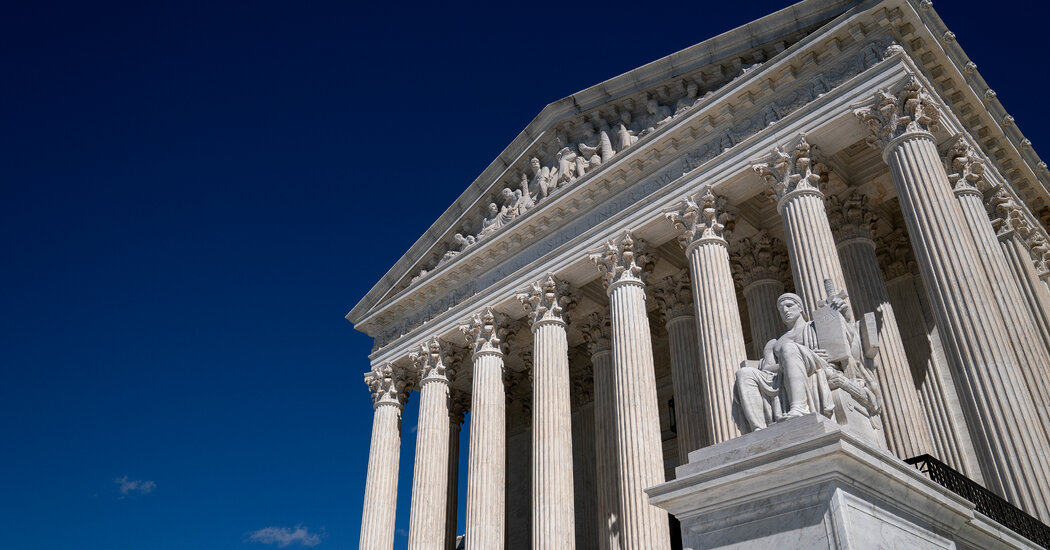 A brief filed in a major gun control case to be heard on Wednesday by the Supreme Court argued that limits on the public carrying of weapons were consistent with the Second Amendment.

WASHINGTON — When the Supreme Court hears a major Second Amendment case on Wednesday, many expect that the court’s recently expanded conservative majority will be poised to strike down the New York law under review, one that imposes strict limits on carrying guns outside the home.

But a brief filed by a group of prominent conservative lawyers and former government officials in Republican administrations has complicated that picture. Drawing on originalism, the interpretive method embraced by the conservative legal movement, the brief argued that “the original understanding of the Second Amendment was that there is not an absolute, unfettered right to carry loaded guns in public.”

J. Michael Luttig, a former federal appeals court judge revered by conservatives, was among the lawyers who filed the brief. He said the issue was straightforward.

“When you look at the history and tradition, spanning six or seven centuries, you indisputably find that public carry of guns has been variously prohibited and regulated throughout the entire time,” he said in an interview. “New York’s statute, and the statutes in other states that are its equivalent, fit very comfortably within the history and tradition of firearm regulation.”

Looking to history is a central feature of originalism, the method of interpreting the Constitution that seeks to determine its original public meaning.

Other lawyers who signed the brief included Peter D. Keisler, a former acting attorney general in the George W. Bush administration; John B. Bellinger III, a top State Department and White House lawyer under Mr. Bush; and Carter Phillips, a leading Supreme Court lawyer who served in the Justice Department during the Reagan administration.

Paul D. Clement, a former solicitor general in the Bush administration who represents the two men and the gun rights group challenging the New York law, took a different view of the relevant history.

“The founding generation understood the Second Amendment and its English predecessor to guarantee a right to carry common arms for self-defense,” he wrote in a Supreme Court brief.

But many historians agreed with Mr. Luttig and his colleagues.

“The weight of the historical evidence is pretty clearly on the side that there’s always been some kind of regulation of carrying arms in public,” said Saul Cornell, a historian at Fordham University who filed a brief supporting New York. “One of the longest continuous traditions in Anglo-American law are limits on the public carry of arms in populous areas.”

The New York law requires that people seeking a license to carry a handgun outside their homes show a “proper cause.” Two men who were denied the licenses they sought sued, along with the New York State Rifle & Pistol Association, saying that “the state makes it virtually impossible for the ordinary law-abiding citizen to obtain a license.”

California, Hawaii, Maryland, Massachusetts, New Jersey and Rhode Island have similar laws, according to briefs filed in the case.

In March, Judge Jay S. Bybee, who was appointed by Mr. Bush, came to the same conclusion as Mr. Luttig in a majority opinion for the United States Court of Appeals for the Ninth Circuit, in San Francisco, which upheld Hawaii’s law by a 7-to-4 vote.

“Our review of more than 700 years of English and American legal history reveals a strong theme: Government has the power to regulate arms in the public square,” Judge Bybee wrote.

“English law restricted public firearm possession as early as the 13th century,” he wrote, culminating in the Statute of Northampton of 1328, which forbade most people “to go nor ride armed by night nor by day, in fairs, markets, nor in the presence of the justices or other ministers, nor in no part elsewhere, upon pain to forfeit their armor to the king.”

Some American colonies adopted that language almost verbatim. “After ratification of the U.S. Constitution, and subject to their own state constitutions,” Judge Bybee wrote, “the states continued to adopt laws that restricted the public carrying of arms.” North Carolina, for instance adopted a version of the Statute of Northampton in 1792.

Judge Bybee acknowledged that “history is messy,” and supporters of gun rights say the 1328 law was meant only to forbid carrying arms with the intent to terrorize.

The brief filed by Mr. Luttig and his colleagues considered recent history, too. Strict gun laws in Washington, D.C., the brief said, “doubtless saved many lives during the Jan. 6, 2021, insurrection.”

Mr. Luttig, who advised Vice President Mike Pence during that fraught time, said “many of the protesters did not bring their guns, because they did not want to be in violation of the law.”

Jason Ouimet, the executive director of the National Rifle Association’s Institute for Legislative Action, said the gun control laws in Washington did not resemble the one challenged in New York.

“If any D.C. law played a deterrent role, it was not the kind of discretionary licensing regime that New York and only a handful of other states have,” he said.

Mr. Clement wrote that his clients’ quarrel was with New York’s licensing system and that they did not “challenge any of New York’s many separate laws prohibiting handguns in specific, sensitive places.”

When the Supreme Court revolutionized Second Amendment law in 2008 in District of Columbia v. Heller, establishing an individual right to keep guns in the home for self-defense, the majority looked to history to determine the original meaning of the amendment. There were, Justice Antonin Scalia wrote, ample reasons to think that the amendment protected a right to guns in the home.

Not all legal scholars think history provides the right framework to decide whether given gun regulations are constitutional. Some note, for instance, that modern weapons are much more lethal than those available in the founding era.

But the court’s two newest members, Justice Brett M. Kavanaugh and Amy Coney Barrett, have both written that historical practices are crucial in assessing Second Amendment rights, though it is not clear how heavily history might factor into their positions in the New York case.

In a 2011 dissent, written when he was still an appeals court judge, Justice Kavanaugh said that the Supreme Court’s precedents “leave little doubt that courts are to assess gun bans and regulations based on text, history and tradition, not by a balancing test,” though he acknowledged that “analyzing the history and tradition of gun laws in the United States does not always yield easy answers.”

Justice Amy Coney Barrett, in a 2019 dissent when she served on a federal appeals court, also looked to history to conclude that a law forbidding people with felony convictions from owning guns should not apply when the crimes in question were nonviolent.

“The best historical support for a legislative power to permanently dispossess all felons would be founding-era laws explicitly imposing — or explicitly authorizing the legislature to impose — such a ban,” she wrote. “But at least thus far, scholars have not been able to identify any such laws.”

Mr. Clement, the challengers’ lawyer, wrote that the language of the Second Amendment — which speaks of a right “to keep and bear arms” — is on their side. Bearing arms, Mr. Clement said, happens outside the home.

Yet the New York law, he wrote, “makes it effectively impossible for an ordinary, law-abiding citizen to obtain a license to carry a handgun for self-defense.”

In a dissent last year, Justice Clarence Thomas, joined by Justice Kavanaugh, agreed that the constitutional text supports a right to carry guns in public. “It would take serious linguistic gymnastics — and a repudiation of this court’s decision in Heller — to claim that the phrase ‘bear arms’ does not extend the Second Amendment beyond the home,” Justice Thomas wrote.

Lawyers on the other side said that does not conclude the analysis, as constitutional rights can be subject to regulation.

Mr. Clement said local officials should not have the power to decide who is fit to carry a gun. “The Second Amendment makes the right to carry arms for self-defense the rule, not the exception, and fundamental rights cannot be left to the whim of local government officials,” he wrote.

The New York law was challenged by Robert Nash and Brandon Koch, who were denied licenses to carry handguns at all times. They were authorized to carry them for target practice and hunting away from populated areas, state officials told the Supreme Court, and Mr. Koch was allowed to carry a gun to and from work.

“Nash and Koch did not receive unrestricted licenses because neither demonstrated a nonspeculative need to carry a handgun virtually anywhere in public,” Barbara D. Underwood, New York’s solicitor general, told the justices.

Joseph Blocher, a law professor at Duke who filed a friend-of-the-court brief supporting neither side, said the case could have enormous practical consequences.

“About a quarter of the U.S. population lives in a state that has a gun law similar to New York’s,” he said. “If the court strikes this law down, it could have a significant impact on the lives of tens of millions of Americans.”