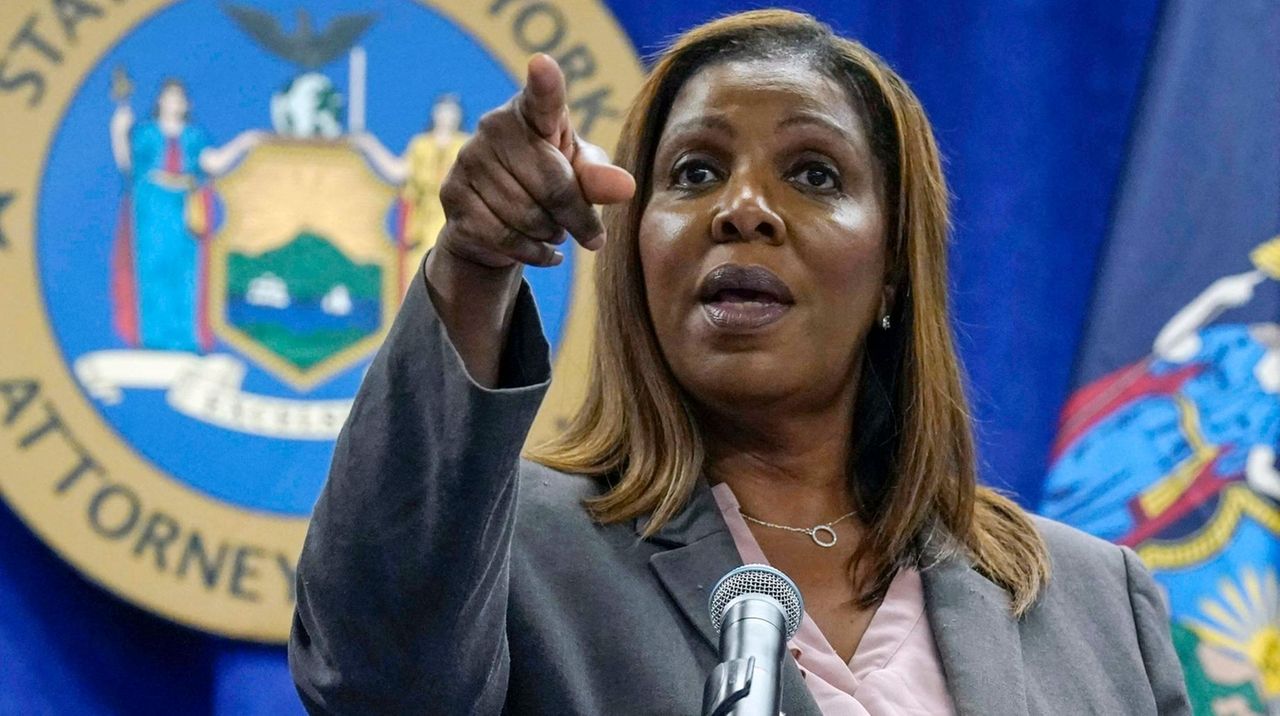 In a YouTube announcement that focused on her Brooklyn roots, James called for unity to take on the powerful in politics and in the private sector.

“We can do this if we stand up, and speak out, together,” she said.

The decision to run for governor will pit her against Gov. Kathy Hochul, who ascended from lieutenant governor in August after three-term Gov. Andrew M. Cuomo resigned amid accusations of sexual harassment.

It was James’ Aug. 3 investigative report, which concluded that Cuomo sexually harassed multiple women, that had triggered Cuomo’s resignation.

In her announcement, James cited her accomplishments, including her 76 lawsuits against President Donald Trump, then smiled at the camera and said, “But who’s counting?”

“I have spent my career guided by a simple principle: Stand up to the powerful, on behalf of the vulnerable to be a force for change,” she said.

Get the latest breaking news as it happens.

After an event in western New York, Hochul said, “Right now, I am very focused on governing. I anticipate there will be many, many people running … I am looking forward to a very robust campaign.”

James is a first-term attorney general who has also taken on Cuomo’s handling of the COVID-19 pandemic in nursing homes. She also cited her action against drug companies she accused of fueling the opioid crisis and pushing the state pension fund to divest from fossil fuels to combat global warming. She also noted her work to create affordable housing and suing the National Rifle Association for failing to manage funds in accordance with laws for nonprofit organizations.

Hochul has tried to secure the support of county Democratic chairs statewide, including in Manhattan, to fend off a challenge, but James’s announcement could change some of those endorsements.

In her announcement, James leaned hard on her progressive credentials, which will be important in a Democratic primary against Hochul next summer. The party’s left-leaning members tend to vote in the greatest numbers in primaries.

James is a former New York City Council woman who won, first campaign as a candidate for the liberal Working Families Party.

She represents a challenge from the left to Hochul, who is a Buffalo native with a more moderate record in Congress and as the Erie County clerk. Political analysts said a more moderate, mainline Democrat could fair better in a general election to attract the state’s large number of voters not enrolled in a party, but it could pose a problem in a Democratic primary traditionally steered by the more liberal voters of the party.

“We don’t know how many Democrats will ultimately run for governor, but we do know that the June primary just got a lot more interesting,” said Steven Greenberg of the Siena College Research Institute poll.

“My immediate action is it’s a two-person run,” said Doug Muzzio, political science professor at Baruch College. He said James’ entry will likely drive out Williams and de Blasio from trying to make their own challenge from the left.

“Tish James is a great addition to the diverse field of very accomplished Democratic candidates vying to serve our state,” said Brooklyn Democratic Party Chairwoman Rodneyse Bichotte Hermelyn, who is also a Brooklyn Assembly member. “Tish’s track record as Attorney General firmly demonstrates her courage in defending our democracy and makes her a formidable contender.”

State Republican Chairman Nick Langworthy has supported Rep. Lee Zeldin (R-Shirley) for the GOP nomination for governor. Both have said Democrats in control of all of state government now are moving New York into a far too liberal era that threatens the economy and public safety.

“Tish James is a radical left ideologue who has used her power to politicize the office, just like the last two attorneys general turned governors who resigned in disgrace,” Langworthy said, referring to Cuomo and former Gov. Eliot Spitzer, who resigned in 2007 amid a prostitution scandal.

“The truth is, it doesn’t matter which Democrat runs for governor as next year’s election will be a referendum on their 15 years of destruction to our state thanks to their pro-criminal, socialist agenda,” he said.

Michael Gormley has worked for Newsday since 2013, covering state government, politics and issues. He has covered Albany since 2001.