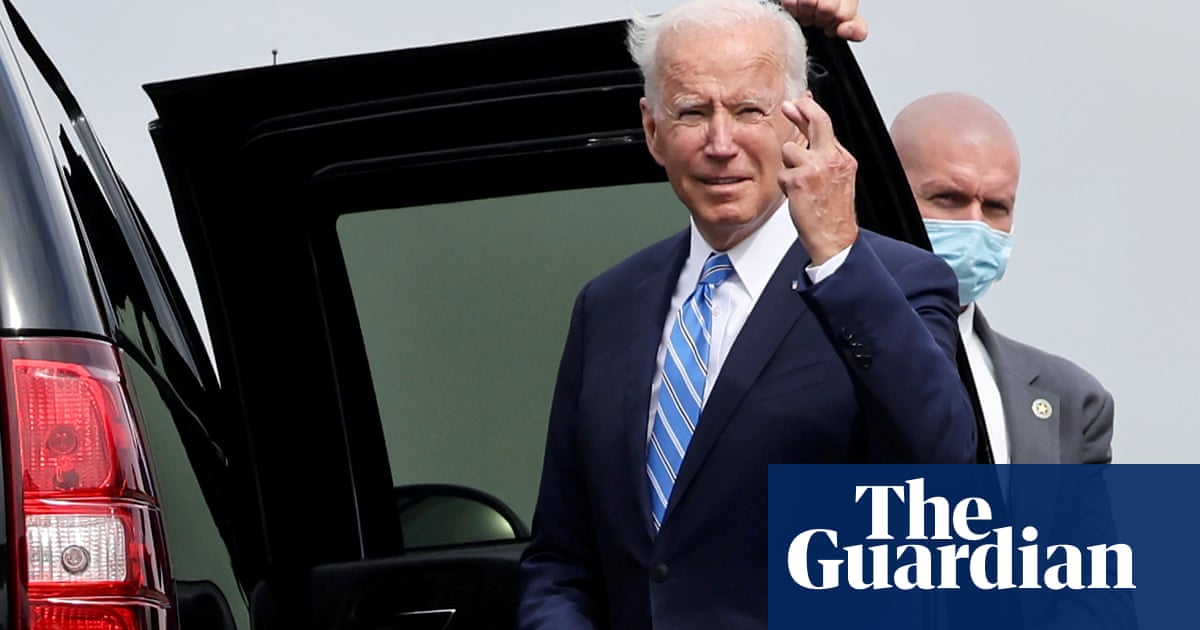 President faces hurdles in reasserting US credibility at the summit. Plus, Texas stand-your-ground laws thrown into spotlight

Don’t already get First Thing in your inbox? Sign up here

Joe Biden is heading to Glasgow for the critical Cop26 global summit, where he will fight to reassert the United States’s credibility after Donald Trump’s presidency, as his spending and climate bill remains unsigned into law.

With the president’s climate agenda pared down by centrists such as the senator Joe Manchin, and allies smarting from the Trump years, Biden will face challenges in overcoming scepticism from other countries. “They saw our dramatic flip from Obama to Trump and the worry is we will flip again,” said Alice Hill, a former climate adviser to Barack Obama.

The White House says Biden’s $1.75tn plan – whittled down from $3.5tn – to expand the nation’s social safety net and tackle the climate emergency would put the US on track to slash planet-heating emissions by 2030. It would also ensure free preschool for three- and four-year-olds and expand health coverage – although other domestic policies, as well as climate interventions to cut fossil fuel usage, have been stripped away.

Which climate policies were dropped from the bill?

Texas’s controversial stand-your-ground laws are to be thrown into the spotlight after a man was charged with the murder of a Moroccan man who pulled into the driveway of his San Antonio house, possibly because he was lost.

Adil Dghoughi, 31, was shot dead this month by Terry Turner, whose lawyers say they will defend him using Texas’s stand-your-ground laws.

In an attempt to rebrand the social media giant after a slew of public relations crises, Facebook’s chief executive, Mark Zuckerberg, has announced that the holding company has changed its name to Meta.

The announcement came at Facebook’s annual AR/VR conference on Thursday, where Zuckerberg laid out his plans for a virtual-reality vision for the future, saying: “We believe the metaverse will be the successor of the mobile internet. We’ll be able to feel present – like we’re right there with people no matter how far apart we actually are.”

The rebrand, which follows testimony from the whistleblower Francis Haugen and the leaking of the Facebook Papers, has been met with a backlash from several quarters.

Stat of the day: YouTube is responsible for more CO2 emissions than Glasgow

Streaming is responsible for producing hefty amounts of CO2, with YouTube’s annual emissions far outpacing those of the city of Glasgow, where world leaders will be meeting for the Cop26 climate summit from this weekend. Meanwhile, viewers clocked up more than 6bn hours watching Netflix’s top 10 shows in the first 28 days of release: the carbon equivalent of about 1.13bn miles of car travel.

Despite its closeness in subject, Spencer, the new movie about Diana, Princess of Wales, feels closer to The Shining than it does to The Crown. Set over three days at the stately home of Sandringham in 1991, the gothic portrait of the princess is a film about “identity and motherhood” that sees Kristen Stewart draw on what she describes as “lingering energy”, saying: “I took [Princess Diana] in, whether or not it was my idea of her or there was some actual literal remnant of her.”

Climate check: Middle East warming at twice the rate of the rest of the world

As the Middle East heats up twice as fast as the rest of the world, countries including Iraq, Kuwait and Qatar are seeing record-breaking temperatures and blackouts due to pressure on the grid. “The interests of the ruling elites run contrary to the interests of citizens … They need the oil business to stay alive for them to stay in power,” said the energy research analyst Jim Krane.

About 15 million Americans are estimated to be linked to the Salem witch trials, and a connection to an accused witch has become a source of pride for many. “Witches are icons of early American history,” said Brenton Simon, the president of the New England Historic Genealogical Society. “People yearn to be related to them.”