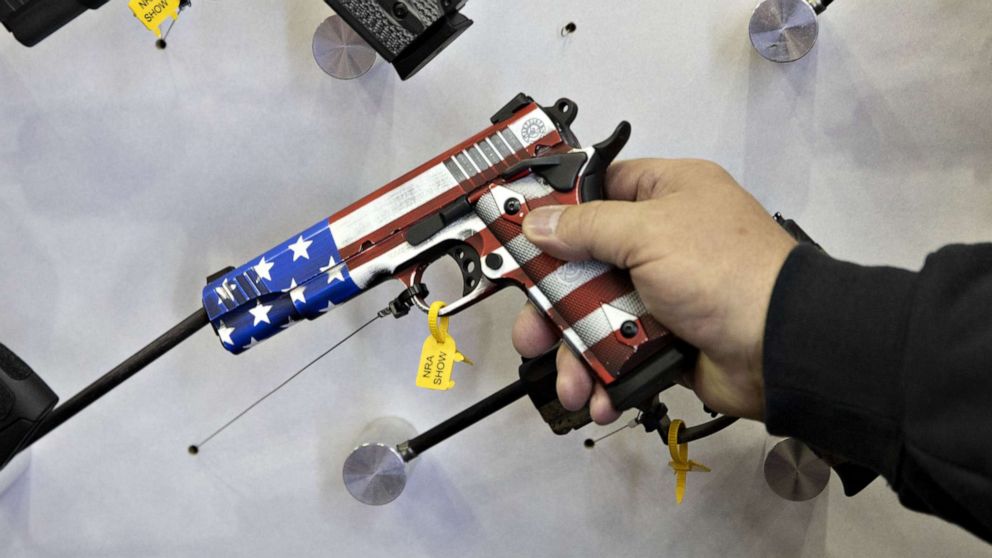 This report is a part of “Rethinking Gun Violence,” an ABC News series examining the level of gun violence in the U.S. — and what can be done about it.

Ty Dodson, a 6-year-old boy from Kentucky, had just started kindergarten when he went to visit his grandmother in Tennessee.

While at his grandma’s home in September 2019, Ty was shot and killed, allegedly by his step-grandfather, with a .357-caliber revolver, according to Nashville police. The man also allegedly shot and killed his wife, Ty’s grandmother, before dying by suicide, police said. Ty’s 4-year-old sister ran to a neighbor’s and survived unharmed, police said.

There’s no reason in the world … why a .357 caliber entered his body three times.

While semi-automatic rifles such as the AR-15 are a major flashpoint in the gun control debate and are often the focus of attention following mass shootings, there are only about 20 million assault rifles in the United States, a fraction of the estimated 400 million guns in the country. Instead, according to ABC News contributor and former FBI agent Brad Garrett, handguns account for the most gun murders in the U.S.

“When I think of Ty, I just think what future he could’ve had,” Ty’s uncle, Chase Dodson, told ABC News. “There’s no reason in the world … why a .357 caliber entered his body three times.”

According to a 2016 Survey of Prison Inmates from the Bureau of Justice Statistics, handguns were the most common type of gun possessed by federal and state prisoners. About 18% of the prisoners said they possessed a handgun, and 2% or less possessed a rifle or shotgun.

And despite public perception, more mass shootings (where four or more victims are killed) are carried out with handguns as opposed to long guns, according to Garrett.

Watch ABC News Live on Mondays at 3 p.m. to hear more about gun violence from experts during roundtable discussions. And check back tomorrow, when we look at the rise of AR-15 style rifles in America.

Handguns generally fall into two categories: 1. revolvers, which are “wheel guns” that hold about six rounds of ammunition, and 2. semi-automatic type handguns, which have smaller sizes that hold roughly seven to eight rounds, and larger ones with about 15 to 16 rounds, according to Garrett. Handguns are appealing because they’re easy to conceal, easy to access around the house and many people, women in particular, tend to feel most comfortable using them, Garrett said.

Of the 10,258 gun murders in the U.S. in 2019, handguns were used in 6,368 of them, according to FBI data. But these numbers may not be exact due to a lack of gun violence research, said Daniel Flannery, a professor at Case Western Reserve University and the director of the Begun Center for Violence Prevention Research and Education.

The “sheer availability” of handguns is behind their popularity, Flannery said.

The 2016 Survey of Prison Inmates said that 90% of the prisoners who had a gun during their crime didn’t get it from a retail source.

“It’s way easier to get a handgun than it is to do just about anything else in this country,” Flannery said. “Our background check is woefully inadequate.”

“We really only put any kind of boundaries on federally licensed gun dealers,” he said, who are the only ones who “have the capacity to conduct a background check, whether it be at their store or when they are present at a gun show sale.”

All other private sales involve sellers who either don’t have the ability to conduct a check or don’t have “a system that is comprehensive and timely and thorough as a check system,” Flannery said.

Although handguns are involved in most shooting deaths, the use of semi-automatic rifles is climbing, said Louis Klarevas, a research professor at Teachers College, Columbia University who specializes in gun violence and safety. In the 1980s, less than 20% of gun massacres (which he counts as six or more victims killed) involved assault weapons, according to a report he issued as an expert witness in a California court case over banning assault weapons.

In the last three years, 67% of gun massacres with six or more deaths were with assault weapons, Klarevas’ 2020 report said.

Semi-automatic rifles’ bullets are bigger and travel much faster than handguns, Garrett said, and the combination of the speed and size of these bullets is why the risk of death and damage is so much higher.

I haven’t shot a weapon since 2019, and I probably won’t ever again.

But handguns are easy to conceal — and easy to carry, though open carry laws (seen in many Southern states) and conceal carry laws differ by state.

Dodson, Ty’s uncle, grew up around guns in rural Kentucky but said his nephew’s murder “changed my views.” Since Ty’s death, Dodson said he won’t own or use a gun.

“Can you tell me one good reason to own a gun versus the cons to owning a gun in America? You can’t. The numbers are too high. I haven’t shot a weapon since 2019, and I probably won’t ever again,” he said. “I am willing to admit I am strong in my conservative values, but the world has became so dark where I’m not so sure if we have the right to bear arms.”

Dodson said he doesn’t believe all handguns should be banned. “But I don’t think they should be in the hands of the wrong person,” he added, saying he supports legal restrictions and gun safety education.

While losing Ty was a turning point for Dodson, it wasn’t his first brush with tragedy caused by gun violence.

Dodson said his oldest brother, Chris Dodson, died by suicide on May 5, 2002 — with a handgun. Dodson said his parents also haven’t kept guns in their house since that day.

“I have an amazing life, but I hurt every single day,” Dodson said.

If you or a loved one is experiencing suicidal thoughts, The National Suicide Prevention Lifeline provides 24/7, free and confidential support. Call 1-800-273-8255 for help.