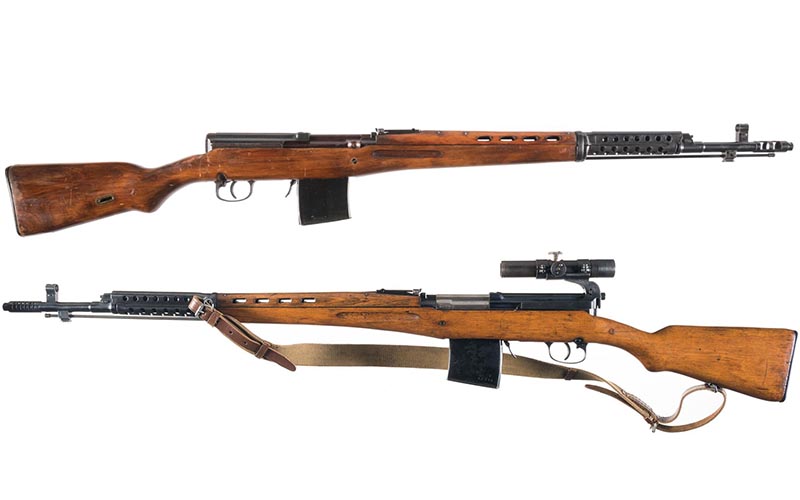 Often overlooked, the SVT 40 was one of the world’s first battle rifles and helped prove the concept of full-power self-loading rifles.

When one thinks of battle rifles, odds are that it’s the guns of NATO-aligned countries that come to mind. Whether that be the M14, the FAL or the H&K G3, full-power battle rifles have come to define the Cold War weapons used by Western powers after WWII. Considering how many of these rifles were made and proliferated, it’s understandable as to why, but it also results in some lesser-known battle rifles being criminally overlooked.

The Soviet-made Self-loading Tokarev Rifle of 1940, or SVT 40, is one such example. Despite nearly two million produced and their extensive use in the Second World War, the SVT 40 remains to most a historical oddity that’s overshadowed by both Western battle rifles as well as other Soviet-made small arms that saw higher volumes of production. None of this changes the fact that the SVT 40 was a revolutionary design at its time of inception, helping to trailblaze the battle rifle concept that would explode outside of Russia in the years to come.

The road that led to the Soviets’ adoption of the SVT-40 was long, winding and filled with characters. While the USSR is not famous in the West for its technological ingenuity, the nation still managed to innovate despite its economic handicap. This is especially true when it comes to small arms design, where ideas like the battle rifle and the intermediate caliber assault rifle were explored well before they became NATO standards.

Battle rifles are best defined as self-loading rifles chambered for full-power cartridges—a concept that was still novel in the aftermath of WWI. Several countries were interested in the concept and began working on developing their own, but only a couple were dedicated enough to see their attempts come to fruition. One was America with their adoption of the M1 Garand, and the other was the USSR when they adopted the AVS-36.

The timelines of American and Soviet attempts to create a successful self-loading rifle align closer than one might guess. Both countries began work in the early 1930s and had formally trialed and adopted a rifle by 1936. Both required further development before the designs were perfected by around 1940. The Garand’s development was much less tumultuous than the Russian’s attempt, however. The AVS-36 was designed by Sergei Simonov, and despite being very outwardly similar to the later SVT it utilized a different action and was capable of both semi and fully automatic fire. Problems experienced in the field resulted in a second round of trials, however, and this time it was the SVT-38 that was deemed the winner.

Designed by Fedor Tokarev of TT-33 fame, the SVT-38 would stay in service until the updated SVT-40 model replaced it. Between 1938 and 1940, the Soviet political elite was embroiled in a debate over whether it would be Simonov’s or Tokarev’s rifle that would enter full-scale production, a debate that was ended with politics rather than merit. While the AVS and SVT were both good rifles with room for improvement, it was ultimately Tokarev’s close personal relationship to Stalin that would result in the victory of his design. Stalin’s favor of the SVT-38 resulted in the abandonment of Simonov’s design and full-scale production of the now new and improved SVT-40. The updated design was now simpler to manufacture, lighter and featured several small quality of life improvements for its user.

The Soviets intended to equip the entirety of their armed forces with this revolutionary new rifle, but the German invasion of 1941 prevented this from happening. While the Americans were able to continue to safely produce and issue Garand rifles, the Soviets were forced to scale back SVT-40 production to produce larger numbers of cheaper guns like Mosin Nagants, PPSh-41s and DP-27s.

The SVT-40 As A Battle Rifle

In terms of its form, the SVT-40 is most similar to the FN-49 and M14 battle rifles that would come much later. It uses a traditional wooden rifle stock without a pistol grip and is fed by 10-round detachable box magazines. Chambered for the venerable 7.62x54R cartridge that’s been used in Russia since before the Soviet Union, the SVT 40 functions using a short-stroke gas piston and a tilting bolt action. This system would go on to influence the German Gewehr 43 and likely the FN-49 as well.

Compared to its contemporary, the M1 Garand, the SVT-40 was lighter and held two more rounds of ammunition in the magazine. The Garand, however, had a potential for faster reloads with a skilled user and was chambered for a slightly more powerful cartridge. Despite the SVT having what we would think of as modern detachable magazines, spare mags were not issued like they are with modern weapons. The SVT was to typically be reloaded from the top by two Mosin Nagant 5-round stripper clips, and inserting a new magazine was reserved for emergency situations for those lucky enough to have a spare. Ultimately, both guns were excellent early battle rifles that were loved by those who used them.

It is worth noting that the SVT-40 was more complicated to maintain and operate than the bolt-action Mosins of old, and less-trained Soviet conscripts did sometimes complain about the design, but the qualities of the rifle became apparent in the hands of better-trained troops. Whether that be Soviet marines or the Germans and Finns who captured thousands of them in the early days of the war, those who knew how to put the SVT 40 to good use appreciated them very much.

Another appreciated feature of the SVT 40 in the field was its relatively light recoil impulse for the round it was chambered for. This was mostly due to its muzzle brake which very effectively mitigated recoil despite the rifle’s light weight of 8.5 pounds unloaded. They later switched to a simpler, two vent hole muzzle brake design that was less effective but faster to produce.

The rifle’s low recoil led its designers to believe it would be an effective automatic rifle as well, leading to the development of the select-fire AVT-40. Unfortunately, the design proved to be too fragile to handle sustained fire and the project was abandoned shortly after it began. Those AVT-40s that did make it into the field were prohibited from using the automatic fire mode as testing revealed that it shortened the lifespan of the gun too significantly. There was also a short-barreled carbine version of the SVT-40 that was briefly produced as well.

A more prominent version of the SVT was its sniper variant, the failure of which was an even greater disappointment than the attempt to make an automatic rifle. Issues with the stock material, stock fitment and barrel resulted in erratic cold-bore shot placement and too much shot dispersion after sustained fire—neither of which being acceptable qualities of a scoped precision rifle, the SVT 40 sniper concept was also abandoned by 1942. Now, with its dreams of being a sniper or an automatic rifle having been thoroughly crushed, the SVT-40 had finally found its identity as an infantry battle rifle. This allowed its producers at both Tula and Izhevsk to simplify manufacturing by no longer milling its scope rails. The presence of these rails in the receiver is one way to help date an SVT.

Unfortunately, the SVT-40 is on the rarer side of WWII surplus in the States. Some Finnish-captured examples were imported in the 1950s, and more were brought in from Russia in the 90s. A mutual agreement between Russia and America prohibited the further importation of most military arms, resulting in the end of Russian SVT, SVD, SKS and other military rifle imports. The Mosin Nagant was a notable exception to this rule, partially explaining why the rifle is so much more abundant in the U.S. than other Russian small arms (besides the fact that many more Mosins were produced in total). Canada had no such agreement with Russia, resulting in many more SVTs ending up there than the U.S.

Due to their high cost, rarity and perceived fragility, most American SVT 40 owners do not shoot them as often as they deserve to be. Many who have shot one reportedly enjoy them even more than M1 Garands, so it’s a shame that these weren’t imported in greater numbers. If priced like they were in Canada, many more Americans would undoubtedly enjoy shooting these classic Soviet battle rifles. They have a lot going for them besides historical provenance and they can definitely go through a spam can of 7.62x54R faster than a Mosin.