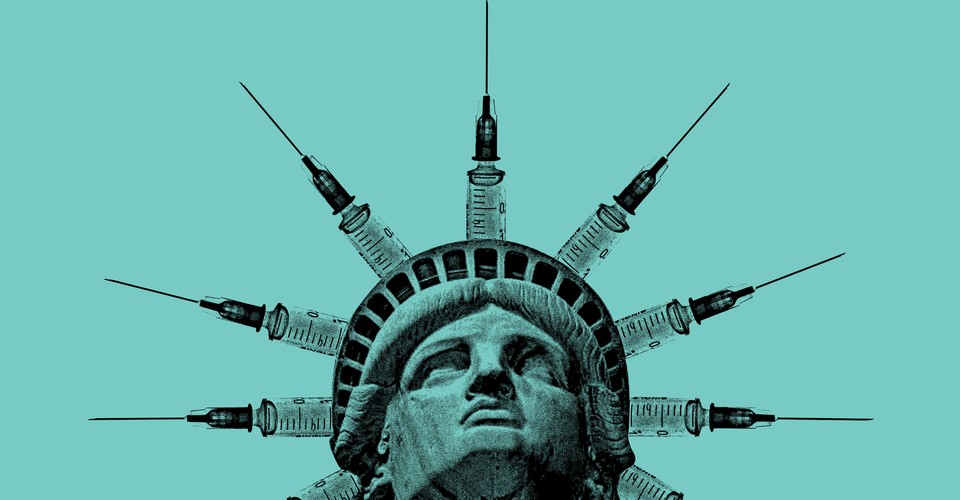 A dozen years ago, a deadly virus was spreading around the world, and authorities in New York issued a mandate that all health-care workers in the state get vaccinated. The American Civil Liberties Union objected.

Forced vaccination against the H1N1 flu, the ACLU wrote at the time, “was not warranted.” The organization’s New York chapter said that individuals “have a constitutional right to bodily autonomy,” and that ordering people to choose between a vaccine and losing their job “is coercive, invasive and unjustifiably intrudes upon their fundamental rights.”

The limited vaccine mandates adopted during the H1N1 epidemic pale in comparison with the directives popping up now in response to the far more dangerous COVID-19 crisis. At the time of the ACLU’s 2009 statement, about 1,500 Americans had died from the H1N1 virus, compared with the approximately 650,000 who have died from COVID-19 as of this writing. Governments and private businesses are requiring COVID-19 vaccinations for their employees, universities are mandating them for their students, and cities are telling their residents that if they want to eat inside a restaurant or attend pretty much any indoor entertainment event, they too must get vaccinated. Critics of the mandates and other orders issued in the name of public health have flooded the courts with lawsuits, challenging the policies on civil-liberties grounds. Some have asked the ACLU for help. But the century-old organization most famous for taking up this cause—civil liberties is actually its middle name—has instead joined the other side.

The ACLU has not signed on to any of the major challenges to vaccine requirements this year, and its highest-profile litigation has come not in opposition to public-health regulations but in defense of them: In South Carolina, the group is challenging a state law banning school mask mandates, saying it violates the Americans With Disabilities Act by discriminating against students who are susceptible to severe illness from COVID-19. Republican leaders in other states, including Florida and Texas, have also acted to ban mask and vaccine mandates; Democratic officials, by contrast, have endorsed stricter restrictions and requirements to combat the pandemic. The debate has become more and more vitriolic: Local conservative candidates have threatened school-board members, and in Colorado, the police were summoned after a group of protesters reportedly threatened to zip-tie a principal who had enforced his school’s COVID-19 quarantine policy.

The ACLU’s initial reaction to the idea of COVID-vaccine mandates was skepticism. In a piece published in March, the senior policy analyst Jay Stanley warned that “there’s a lot that can go wrong” with vaccine passports, citing the potential for privacy abuses and lack of universal access associated with forcing people to provide digital proof of their immunization. But last week, the organization endorsed vaccine requirements, adopting the argument that mandatory inoculations against COVID-19 “further civil liberties” by protecting the most vulnerable. “We see no civil liberties problem with requiring Covid-19 vaccines in most circumstances,” wrote David Cole, the ACLU’s legal director, and Daniel Mach, the director of its program on freedom of religion and belief.

In a recent interview, Cole told me that the organization had assigned a working group of lawyers to consult with public-health experts over the past several months in order to develop its position. But he suggested that it was not a particularly close call. “Whether it’s bodily integrity, personal autonomy, or religious freedom, they’re all rights that are recognized in the Constitution, but they’re not absolute rights,” Cole said. “You don’t have the right to inflict harm on third parties, and that’s what you’re doing when you refuse to take a safe and effective vaccine to a very infectious virus.”

To the ACLU’s critics, its support of vaccine mandates is another sign that an organization that was often willing to take unpopular stances in the name of liberty has abandoned its roots to fall in line with progressivism. The ACLU has long been associated with liberalism and vilified by the right, but its most famous fights have come in defense of accused Communists and admitted Nazis. “The ACLU has been incredibly courageous over so many decades to protect individual liberties, no matter how unpopular they might be or how offensive to the left it might be,” James Bopp Jr., a prominent conservative lawyer who has partnered with the ACLU over the years on First Amendment cases, told me. “I see them drifting away from that.” Bopp is representing plaintiffs who are challenging the University of Indiana’s vaccine requirement for students. The Supreme Court last month refused to block the mandate on an emergency appeal, a signal that the policy is likely to be upheld.

Cole dismissed Bopp’s suggestion, rattling off a litany of recent examples in which the ACLU had defended conservatives or gone against progressives. The group defended the National Rifle Association when Democrats in New York tried to shut it down; it joined conservatives in challenging a new campaign-finance law in California; and it questioned the decision by Twitter and Facebook to kick Donald Trump off their platforms.

ACLU officials similarly reject the implication that their support of COVID-vaccine mandates is inconsistent with the organization’s opposition to past immunization requirements. They argue that COVID-19 is a more infectious and deadlier virus than H1N1, and that the vaccines are better. “What is the risk to public health? How effective is the vaccine? What are the alternatives?” asked Allie Bohm, a policy counsel for the New York Civil Liberties Union, summarizing the questions she considered. “The facts of H1N1 are different, and they lead to different conclusions. I don’t think that is inconsistent, because it is the same test being applied.”

The ACLU and its affiliates are watching the implementation of vaccine mandates carefully to ensure that they don’t discriminate against marginalized communities or penalize people with certain medical conditions who have been advised not to get the shots. But challenges to the mandates are likely legal losers, Bohm told me, citing Supreme Court precedent. “I think it’s abundantly clear that these vaccine mandates are going to be upheld,” Bohm said.

Even as they defended the ACLU’s position, lawyers I interviewed acknowledged that they were in a tricky spot. “I can understand why somebody at first blush would think, Oh, that’s sort of a strange position for the ACLU to take,” said Allen Chaney, the director of legal advocacy for the ACLU’s South Carolina affiliate, which is challenging a ban on mask mandates. He told me that although the organization is defending the mandates in this case, he had also received a compelling email from the parent of a hearing-impaired child who couldn’t understand what her teacher was saying without seeing their lips move. “I would readily concede that the [ADA] would require for that student some different accommodation, but we have those tools available to us,” Chaney said. “It’s important to understand that our lawsuit is not just sort of a wholesale embracing of widespread mass mandates for all students no matter what, without exception.”

Like everyone else, the ACLU has been grappling for nearly a year and a half with previously unthinkable curtailments on personal freedom in the name of public health. “We have to be careful. We’re in a whole new world,”the group’s executive director, Anthony Romero, told my colleague Conor Friedersdorf in April 2020, when much of the U.S. economy remained shut down as part of an attempt to “slow the spread.” The ACLU largely deferred to public-health authorities then, as now. Critics of the organization regularly misunderstand what it is about, Chaney said. “It’s often been the case that we are pushing back on measures we believe have gone too far,” he said. “But it’s not part of our DNA that we are advocating for this pure libertarian or anarchist society where people get to trample on each other just because they have the freedom to do so.”

The ACLU may be on the side of mandates now, but for how long? When the pandemic eases again, will it still support masking requirements? And if most people currently have to get two doses of a vaccine, what about a third? “It’s always been a balancing test,” Bohm said. “There is a lot of gray.” What seems like an easy call now, in other words, could become much harder when that balance—between public health and personal liberty—shifts once again.