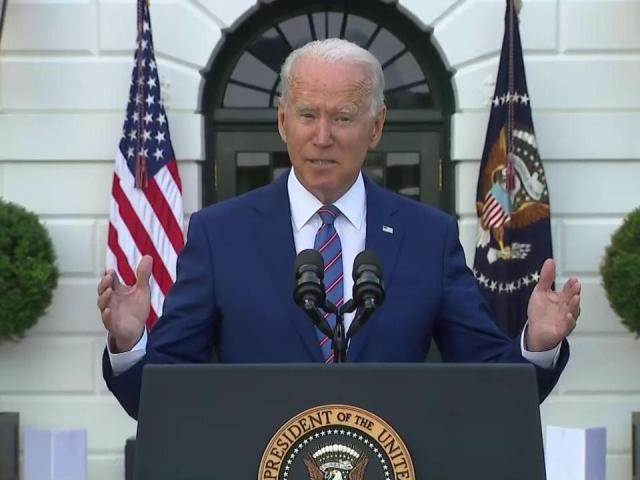 “Rogue gun dealers feel like they can get away with selling guns to people who aren’t legally allowed to own them,” Biden said June 23. “There has always been the ability to limit — rationally limit the type of weapon that can be owned and who can own it.”

And, Biden said, that power was rooted in history.

“The Second Amendment, from the day it was passed, limited the type of people who could own a gun and what type of weapon you could own,” Biden said.

He added: “You couldn’t buy a cannon.”

We reached out to the White House and received no comment, but Biden’s statement is not accurate history.

During the campaign, Biden made a similar claim about cannons in the Revolutionary War and who could own them. We rated that False.

This time, on top of that, Biden misrepresents what the Second Amendment says.

The text of the Second Amendment is short: “A well regulated militia, being necessary to the security of a free state, the right of the people to keep and bear arms, shall not be infringed.”

“The Second Amendment places no limits on individual ownership of cannon, or any other arms,” Reynolds said.

There have been many court cases to resolve whether the amendment confers an individual right to bear arms. In 2008, the U.S. Supreme Court ruled that it does.

“The first federal gun control law does not appear until the 20th century,” Johnson said.

That law, the National Firearms Act, came in 1934 when machine guns were the weapon of choice of Prohibition Era gangsters. (The law was drafted before Prohibition ended in 1933.) When U.S. Attorney General Homer Cummings made the case for the law before the House Ways and Means Committee, he based it on the government’s power to tax and regulate interstate commerce, not the Second Amendment.

“If we made a statute absolutely forbidding any human being to have a machine gun, you might say there is some constitutional question involved,” Cummings said April 16, 1934. “But when you say ‘We will tax the machine gun’ and when you say that ‘the absence of a license showing payment of the tax has been made indicates that a crime has been perpetrated,’ you are easily within the law.”

The debate that framed the Second Amendment

From the way Biden put it, the Second Amendment regulated weapons. The more immediate driver in 1787 was the desire to keep the federal government in check.

The framers of the Constitution agreed that a federal government might need a standing army. But coming out from under one despot, they wanted to avoid creating another. This was something that Federalists and Anti-Federalists could agree on, wrote Valparaiso law professor David Vandercoy.

“Both believed the greatest danger to the new republic was tyrannical government and that the ultimate check on tyranny was an armed population,” Vandercoy wrote in 1994.

There were some state and local laws after the Second Amendment was adopted in 1792 that limited firearms.

The most sweeping ones barred Black people, free or enslaved, from owning them.

A 1792 Virginia law, for example, said, “No Negro or mulatto whatsoever shall keep or carry any gun, powder, shot, club or other weapon whatsoever.”

“The (National Rifle Association) will call out Biden, correctly, that there were no modern style gun control laws in the Founding era because there was little interpersonal gun violence among persons of European origin,” Cornell said. “Gun control groups will correctly say that a variety of robust regulations existed at the time of the Second Amendment and that the Founders feared anarchy as much as tyranny.”

Cornell argues that for about the first 50 years after passage of the Second Amendment, gun technology was limited. The issues of crime and safety that drive the modern debate, he said, didn’t begin to emerge until manufacturers began producing reliable, affordable guns in greater volume.

Biden said that from the start, the Second Amendment “limited the type of people who could own a gun and what type of weapon you could own.”

The Second Amendment limited government power, not the rights of individuals. Laws at the time that limited firearm ownership were primarily racist, aimed at controlling Black people and Native Americans.