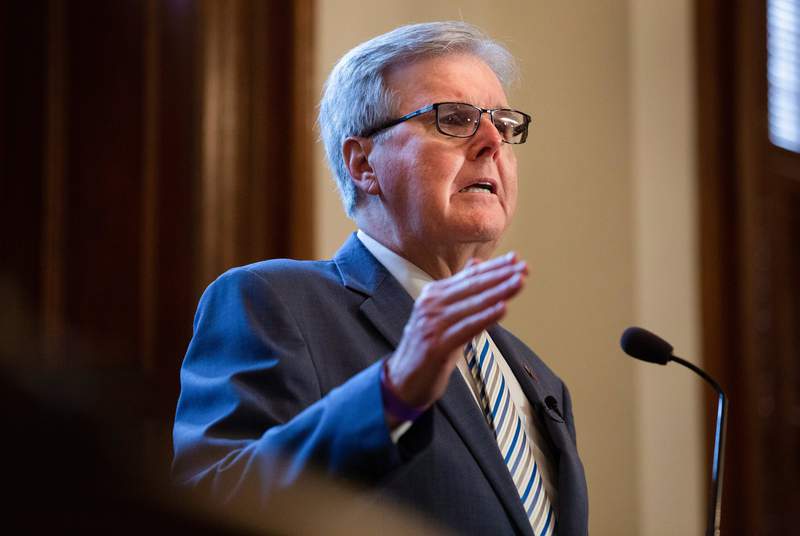 Sign up for The Brief, our daily newsletter that keeps readers up to speed on the most essential Texas news.

Two years ago, Lt. Gov. Dan Patrick wanted it to be known that he was prepared to buck his party on one of its sacred issues: guns.

In September 2019, he gave an interview to the Dallas Morning News in which he said was “willing to take an arrow” and go against the National Rifle Association by pushing for Texas to extend background checks to gun sales between strangers.

But Patrick’s outspoken advocacy did not last long, and the next legislative session ended last month without any progress on the cause.

For the past year, Patrick has refused to answer questions about whether he still supports the stronger background checks. On Thursday, at a San Antonio news conference where Gov. Greg Abbott signed a series of bills from the session expanding gun rights, Patrick was asked directly, but he would not state his position.

“People want people who have a right to carry a gun to be able to access a gun and carry that gun to defend themselves, and all of us, including the NRA — all of us — want those who shouldn’t have a gun to not have a gun, pure and simple,” Patrick said.

Asked more directly if he no longer supported the proposal for stranger-to-stranger background checks, Patrick asserted he had answered the question.

Patrick was seated alongside Abbott, state House Speaker Dade Phelan and Wayne LaPierre, the longtime leader of the NRA.

Patrick’s comments to the Dallas Morning News came at a time when gun violence was front and center for Texans. A month earlier, the state was rocked by the back-to-back mass shootings in El Paso and Midland-Odessa that left 30 people dead and dozens more injured.

Patrick indeed invited the NRA’s wrath with his comments. At the time, the group issued a statement criticizing Patrick and his “gun control proposals,” saying they “would resurrect the same broken, Bloomberg-funded failures that were attempted under the Obama administration.”

Abbott was not as outspoken about such background checks back then, but he acknowledged the loophole as a problem.

“Right now, there is nothing in law that would prevent one stranger from selling a gun to a terrorist, and obviously that’s a danger that needs to be looked into,” Abbott said after meetings he had called to figure out policy solutions following the El Paso massacre.

Abbott ultimately recommended that the Legislature “consider ways to make it easy, affordable and beneficial for a private seller of firearms to voluntarily use background checks when selling firearms to strangers.”

Asked why a bill to allow stranger-to-stranger background checks did not pass this session, Patrick said, “There was not a bill filed to my knowledge, so that’s why it didn’t get passed.”

But there was at least one bill filed this session to institute such background checks — Senate Bill 163 by Sen. César Blanco, D-El Paso. The legislation, however, went all but nowhere, getting referred to the State Affairs Committee in early March and never receiving a hearing.

Furthermore, when the Senate was debating a bill early last month to allow permitless carry of handguns, Blanco introduced an amendment to mandate background checks for private firearms transfers. The amendment failed.

In any case, Democrats say if Republicans really cared about strengthening background checks — especially Patrick, who has a tight grip on Senate Republicans — they would have made it happen.

“When leadership wants something, they make sure a bill is filed,” Rep. Diego Bernal, D-San Antonio, tweeted Thursday in response to the news conference, which featured the signing of the permitless carry bill. “They didn’t. They did this instead.”