When it comes to sending pests to varmint Valhalla, few implements hold a candle to a .22 Magnum Rifle. We’ve picked six of the best—hitting every price point—that will dependably cut down nuisance critters like ripe wheat. 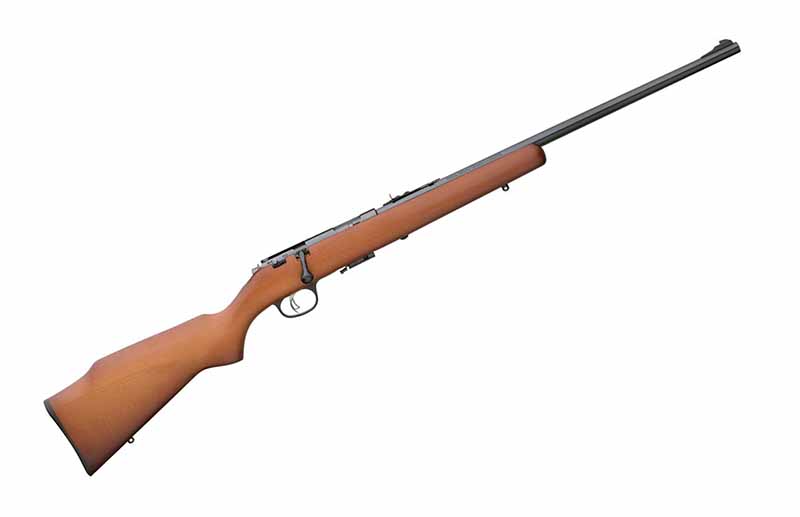 A classic-looking rimfire that holds its own in the field, the Marlin bolt-action is a top .22 Magnum rifle that doesn’t break the bank. While Marlin makes a synthetic stock model (the XT-22MR), it’s difficult not to opt for the XT-22M, sticked in walnut. Not only is there a matter of traditional appeal taking this route, but it’s also a Monte Carlo stock, which offers a bit more of an intuitive cheek weld.

The gun is Marlin through and through, with its 22-inch barrel boasting the company’s Micro-Groove rifling. Unfamiliar? Simply the gun has 20 smaller and shallower grooves compared to 6 or so found in traditional barrels. It’s an accurate system, which tends to deform bullets less. At the bear minimum, it’s novel. Other notables on the rifle include Pro-Fire adjustable trigger, ramp rear sight, fiber optic front sight and 4 and 7 shot detachable box magazines. Overall, it’s a nice little shooter and makes a nice truck gun, in case you run into coyotes on the back 40. MSRP: $276 About as plain Jane as you can get in .22 Magnum rifles. But don’t let the 93 F fool you—it’s a solid iron. Set up as a bit of a flexible platform, the bolt-action works well for casual plinker and hunting iron. However, be aware, its tapered 21-inch sporter profiled barrel heats up quickly and gets whippy. A long string will open up.

Its synthetic stock is workable but leaves a little to be desired in the aesthetics department. And the sights (open) are passible, but it’s worthwhile to take advantage of the drilled and tapped receiver. It being a Savage, the rifle boasts the company’s snappy adjustable AccuTrigger, which does its part in improving the rifle’s accuracy. Though, it’s worth mentioning 93 had feed issues from the 5-round box magazine at one time. However, by all accounts Savage ironed it out. If you come upon a faulty mag, it’s correctable by slightly bending the feed lips in a hair. MSRP: $289 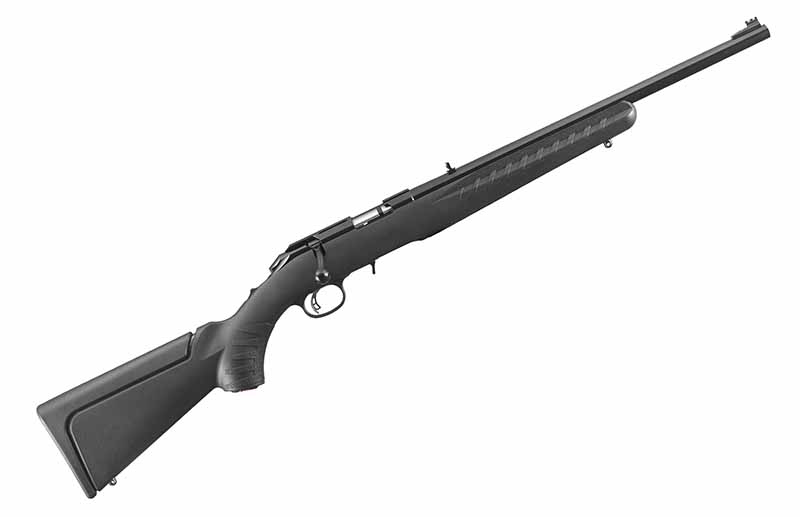 While not the cheapest of the economy models, Ruger’s base .22 WMR rifle might provide the best value. Centerfire and rimfire, the American line is difficult to beat for affordable accuracy and performance. For shooters just dipping into .22 WMR, the Ruger is certain to leave a good taste in their mouth.

While the synthetic stock looks like it’s nothing to write home about, it does offer more functionality than you’d figure. First off, it features Ruger’s Power Bedding integral bedding block system that creates a solid mate up between it and the receiver. And it’s also is adjustable for length of pull and comb height, though an interchangeable stock module system. You can’t fine-tune it to a fraction of an inch, but it does offer flexibility to the system. As for other notables on the 22-inch barreled rifle, it’s outfitted with Ruger’s adjustable Marksman trigger, adjustable rear and fiber-optic front sights and utilizes the company’s JMX-1 9-round rotary magazine. Also, it’s receiver is drilled an tapped. Altogether, the American Rimfire is a tidy package. MSRP: $359 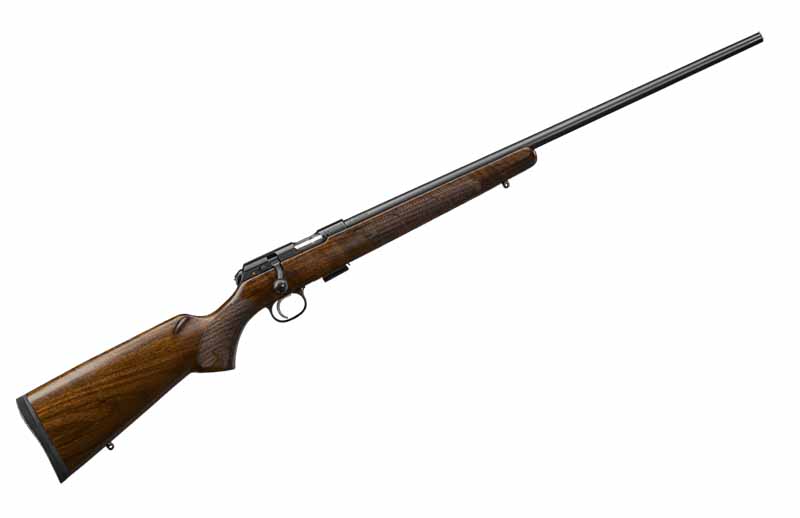 Among rimfire diehards, the 457 has achieved epic status—namely because of its modular design making it quick work to upgrade. However, you needn’t trick it out to reap the benefits of the Czech bolt-action. The 24.8-inch barreled CZ is a lights-out hunter, milking the most reach out from the magnum rimfire and delivering accuracy shot after shot.

Sans sights, the .22 Magnum rifle has an 11mm dovetail milled into the top of its receiver for attaching scope ring mounts. And CZ anticipates plenty of glass on top, with the rifle’s bolt-throw a terse 60-degrees—allowing for a optics with a larger ocular bell. Trigger-wise, the 457 has an excellent switch, an adjustable system with almost no creep and a crisp break. And the receiver, it’s as small and nifty as they come, rigid to enhance accuracy but cutting down on the rifle’s overall weight.

As to the 457’s stock, it’s walnut and straight, a cut that’s quick to the shoulder and intuitive to get the eye in the scope. Once there, few critters are likely to escape unscathed. MSRP: $515

Bergara burst onto the rimfire scene a few years back and the shooting world is better for it. The Spanish manufacturer has turned out absolute gems, which includes its do-all Bergara Micro Rimfire. Originally only offered in .22 LR, the slick little bolt-action is available as .22 Magnum in 2021, a boon for any dead-serious varmint hunter. In complete honesty, the BMR borders on overkill for hunting, given Bergara designed it with the NRL22 base class in mind. Yet, it’s affordable enough it more than qualifies as a field gun.

The 20-inch steel barreled BMR (the company also has a carbon-fiber barrel model) also has some interesting twists dedicated rimfire hunters are sure to appreciate. In particular, its trigger is upgradable with any Remington 700 aftermarket option. Though, Bergara’s stock Performance Trigger is nothing to turn your nose up at. Additionally, it features 5- and 10-round detachable box magazines, oversized bolt handle, 30 MOA scope rail and threaded muzzle (1/2-28” TPI) with a thread protector. For bolt-action .22 WMR hunting rifles, it’s difficult to do much better. MSRP: $565

Quick shots count in varmint hunting and there’s nothing faster on this list than Savage’s A series .22 WMR rifle. Essentially a clone of the company’s A17 .17 HMR rifle, the A22 uses the same delayed-blowback action, utilizing an interrupter lug until peak pressure has subsided and the round is downrange. Consider it insurance against a ruptured case and damage to the rifle or the person behind the trigger.

As for accuracy, the A22 has it in spades. Thanks to the .22 Magnum’s light recoil, its almost frightening how quickly you can crack off hits, too. Savage gives you every opportunity to take advantage of this, outfitting the rifle with a fluted heavy barrel that keeps harmonics sounds and a very comfortable Boyds Pro Varmint stock. A nice pistol grip and block stock offer the utmost control when setting up long shots on small targets.

Other features worth pointing out are Picatinny optics rail, AccuTrigger and 10-round rotary magazine. The A22 has everything you need, all you have to supply are the varmints. MSRP: $709

South Dakota Gov. Kristi Noem under investigation for use of state-owned airplane
The historical CIA goes on display for 75th anniversary
Experiments in Viking Navigation Viking Sun Stone
Tisdel and Ellison: Gun safety means safe storage
A Senate Race That Shouldn’t Be Close But Is