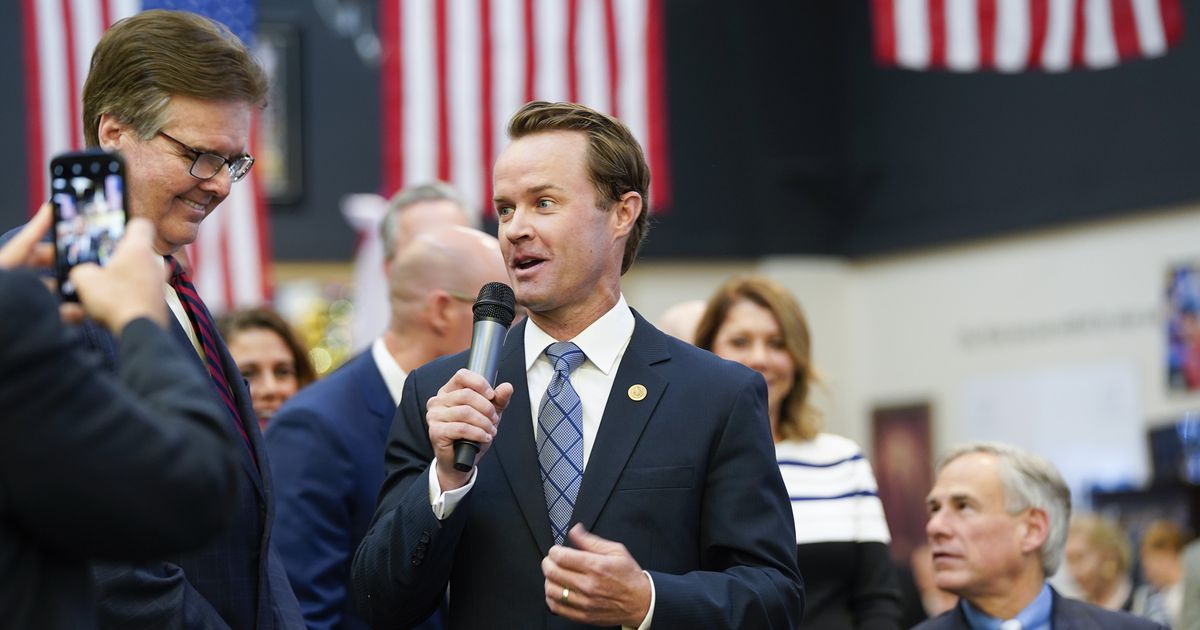 AUSTIN — As the Legislature entered the session’s homestretch Friday, many Texans were wondering how much of the conservative “red meat” agenda had passed.

The House worked late Thursday and into Friday afternoon, after senators went home, because of deadlines it faced for passing its own bills.

The flurry of activity rescued scores of bills from potential death but left hundreds of others in the legislative cemetery.

Of the hot-button priorities for the GOP’s conservative “base,” only one abortion bill so far was headed to Gov. Greg Abbott for his signature.

The fate of staunch conservatives’ other priority bills, targeting elections, guns, abortion, transgender children and taxpayer-paid lobbying, will largely be decided in the next 11 days.

A quick update on the red meat agenda:

Both chambers have passed Senate Bill 7, a GOP-backed election bill that Democrats have said perpetuates the falsehood that there was widespread voter fraud last year.

Republicans have said that they’re merely reining in Democratic election administrators in Texas’ biggest counties, and that even one fraudulently cast ballot is one too many.

The Senate and House have each appointed five members to negotiate differences, and both chambers will have to approve an agreed-to version before the bill can be sent to Abbott. In his State of the State speech on Feb. 1, the Republican governor made “election integrity” an emergency item for the session.

“We must have trust and confidence in the outcome of our elections,” Abbott said.

House Democrats, who generally have more influence on partisan issues than their Senate counterparts do, wrested some concessions. For example, they reduced the degree of a proposed increase in criminal penalties for assorted election-law violations.

Still, the House-passed bill would empower partisan poll watchers, a Republican goal. And it would bar mass distribution of applications for mail-in ballots, another priority, especially of Lt. Gov. Dan Patrick and GOP senators from Harris County.

Other Republican election bills are out of the Senate and out of House committee and now waiting for the House Calendars Committee to green-light votes by the full House: SB 1509, to require placement of a driver’s license number or part of a Social Security number on an absentee ballot as a safeguard; and SB 1111, to ban using a post office box as a voter’s address on a registration form.

The permitless carry or “constitutional carry” bill that is backed by the National Rifle Association and is one of the state GOP’s top five legislative priorities has moved the closest it’s ever gotten to becoming law in Texas.

House Bill 1927, which would let Texans 21 and older carry a handgun in public without a license and the currently required safety training, is in a House-Senate conference committee.

If Abbott had hoped the measure would fall by the wayside — and his initial reluctance to give his opinion about it suggested he did — that changed when Patrick created a special committee, brokered deals with law enforcement groups and overcame the reluctance of several Republican senators to push it through his chamber.

In the Senate’s version of HB 1927, among other things, people convicted of certain violent misdemeanors, such as for domestic violence, would not be eligible for permitless carry. Felons caught illegally toting firearms would face steeper penalties. 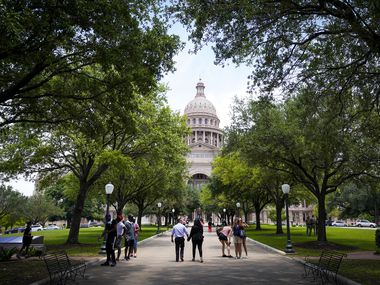 The House is pushing back on the changes, though Speaker Dade Phelan and Patrick say they’re confident a compromise will be reached and sent to the governor.

There’s been a stunning turnaround: Neither Abbott nor Patrick began the session touting the proposal. Phelan, though, had authored an unsuccessful House version during the last session. This year, his ascension to the speakership and support for permitless carry completely jumbled the conventional wisdom.

Some of the other gun bills Patrick prioritized are far along in the process. SB 20, which would allow hotel guests to take firearms into their rooms, is in the House Calendars Committee. SB 19, which would ban state contracts for or investments with companies that “discriminate against the firearm or ammunition industries” has passed both chambers.

One of the bills House Democrats slowed the process on this week so they could kill it was HB 1171.

It would require a judge hearing a pregnant teen’s request for permission to have an abortion without parental consent to appoint an attorney ad litem or guardian ad litem to represent the fetus. While it appears stalled, in rare cases, bills that don’t advance by a legislative deadline are revived later as “piggybacks,” attached to bills on a similar subject.

SB 8, which proposes an almost total ban on abortion, is the one top conservative hot-button priority that is ready for Abbott’s signature.

Earlier this month, the House passed it after a grueling, raw fight that took hours of floor time. On Friday, it was signed by the House chief clerk and secretary of the Senate and sent to Abbott, who has said he “can’t wait to sign” it.

The measure, which proponents call a “heartbeat bill,” would ban abortions as early as six weeks into a pregnancy and allow virtually any private citizen to sue abortion providers who violate the restriction. While judges have struck down similar laws in other states, Mineola GOP Sen. Bryan Hughes’ proposal differs by allowing private citizens to enforce it. Hughes and supporters hope that because it doesn’t require enforcement by state officials, SB 8 will pass constitutional muster.

Senators accepted a House change that would prohibit a person who impregnated a woman through rape, sexual assault or incest from bringing a lawsuit under the bill. 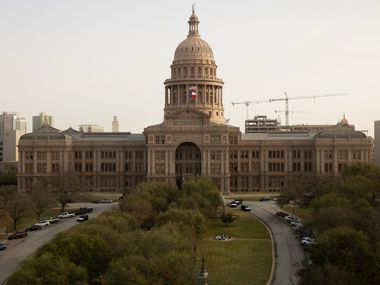 Phelan explained then that he was “done talking about bashing on the gay community” and didn’t want to push legislation that could be used as a vehicle for discrimination. “It’s completely unacceptable. … This is 2019,” he said.

Now that he’s speaker, LGBTQ advocates are wondering if Phelan will stick to that sentiment and rebuff some Senate bills.

One is SB 29, the “Fair Sports for Women & Girls Act,” which appeared to be buried in a House committee until a Democratic intraparty ruckus resulted in its being freed. The measure, which would bar transgender girls from competing on scholastic sports teams with other girls, is now in House Calendars.

Another is SB 1646, which would make it child abuse for parents to help transgender children transition with the use of drugs, hormones or other medical procedures. It’s awaiting a hearing in the House Public Health Committee. A similar House measure, barring medical professionals from providing such “gender-affirming care,” was on the House’s agenda Thursday night but died after it hadn’t been taken up by the midnight deadline. 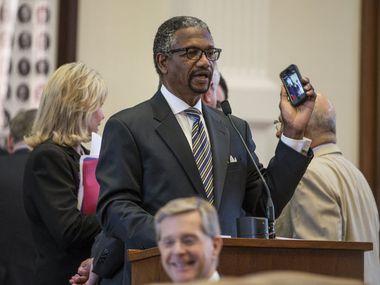 On Friday, a Phelan spokesman declined to comment on the House prospects of SB 29 and SB 1646. They appeared dim but Phelan-Patrick jockeying on other matters could force a House concession.

SB 10 began as an outright ban on taxpayer-funded lobbying by Texas cities and counties. As rewritten and advanced by House State Affairs on Friday, it would make all the local government entities, including school and hospital districts, publish a notice when they plan to hire a lobbyist. The governing body then would have to vote to do so.

They could still do it — but a lot more conspicuously.

A separate bill by Houston GOP Sen. Paul Bettencourt, SB 1879, would have required governmental entities to file lobbying expenditure reports with the Texas Ethics Commission. But Marshall GOP Rep. Chris Paddie’s House State Affairs panel appeared to have given that idea a thumbs down.

Some local government advocates note that in debating the state budget, the House — with six more votes than 76, the minimum majority in the 150-member chamber — followed Dallas Democrat Yvonne Davis’ lead and rebuffed a proposed ban on educational regional service centers’ paying for lobbyists.

The next 11 days promises a confusing welter of House-Senate conference committees, hurriedly called meetings of House Calendars and dickering by Patrick and Phelan that will decide whether most of conservatives’ hot-button bills pass or fail.

The next huge hurdle: The House faces a midnight May 25 deadline for initially approving Senate bills that have wide effect or could be controversial.

If the past is any guide, look for each chamber in coming days to accuse the other of stalling on its bills and threaten retaliation. Often, the posturing leads to a slowdown. And that contributes to a four-day stretch, starting with the weekend of May 22-23, that is tense and chaotic.

Welcome to the sausage factory.